Where love is found, and passion unfolds…

Walk through the doors of Night, a small town bar in Mississippi, and take four separate journeys of intense romance.

The First Night: When Kayla comes into Gannon's bar to have drinks with her coworkers, she doesn't recognize him, but he knows exactly who she is—she was the one girl in high school he'd always wanted but had been afraid to pursue. He's changed a lot since high school though, and maybe now he has a chance at making that dream come true.

Hijacked: The last woman Kyle trusted with his heart betrayed him, and he has no interest in getting involved with anyone. There's only one problem—now that he's met Sharon, he craves her touch, her laughter, the look in her eyes when he pulls her near.

Give in to Me: When Scott and Jennica meet, emotions run high, and they can't resist the urge to get to know each other. But Jennica's past threatens to come between them, and Scott can't seem to shake his present. Now one, or both, of their lives may be at risk, and Jennica must face the consequences of giving in to her heart and falling in love with Scott.

Can't Let You Go: Ty is a no-nonsense, by-the-book lawman who keeps to himself. Getting emotionally attached to someone is not an option…until he meets Lynette. She's spontaneous, reckless, and a gorgeous haphazard of a woman who threatens to break through his guarded walls and unsettles emotions he buried long ago.

Content Warning: These stories contain explicit sex and language that may leave readers flushed and breathless. 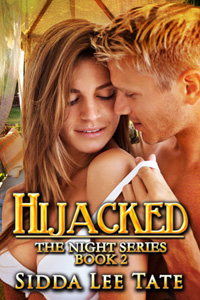 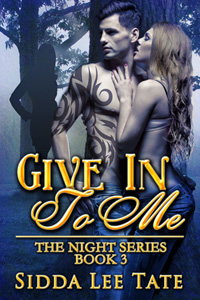 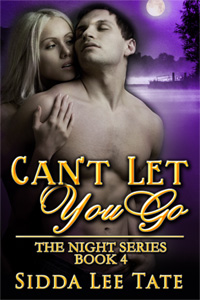 Kayla grinned, took a deep breath, and settled on a bar stool. She didn't have to wait. The bartender met her as she sat. His gaze held hers for a second longer than she was comfortable with, and her breath hitched in her throat. She moved her stare to the shelves of bottles behind him. Without her asking, he placed a shot of tequila in front of her. She slowly traced the rim with her index finger, trying to think of something clever to say when he sat another shot on the worn mahogany bar top. "Thanks, but I can't handle two more. I'd like to be able to walk out of here."

He held the extra glass up to her eye level, leaning toward her, his eyes burning into hers. "This one is for me. I'd like you to be able to walk out of here too. Let's have a toast."

People around the bar repeatedly shouted out their orders, but the bartender didn't seem to hear them, or if he did, he didn't acknowledge them. Two other guys serving drinks took up the slack.

Kayla picked up the small glass of liquid meant for her and slowly batted her lashes. "A toast to what, exactly?"

She couldn't help but notice the black scribe tattoo on the inside of his upper arm and wondered what it said, but didn't allow her eyes to dwell as they followed his arm to his shoulder and to his neck. She imagined her tongue trailing across his skin and quickly flushed.

He smiled, and his eyes sparkled as he clinked his glass to hers. "To four-inch, platinum heels and jeans that make an ass like yours trigger heart attacks for all that may lay their eyes upon it."

Kayla laughed out loud. He had to be joking, how cheesy. "Well, I wouldn't say it has such an extreme effect on everyone. Does a line like that work on every female?" She licked her hand where he'd showed her earlier and grabbed the salt shaker.

He leaned in closer, inches from her, his gaze intense. "I couldn't be more serious."

Sharon closed her eyes, forcing her lids to block her sight, she told herself it was not happening. Kyle was not standing a foot away from her table. He was not giving her that crooked smile that made her heart do crazy things under her chest walls—flutters and flips she couldn't control. She heard movement, heard someone slide into the seat across from her. She released the breath she'd been holding. Continuing to convince herself that if she didn't see him, he wasn't really there, she lifted the book directly in front of her face and opened her eyes to the black print that no longer looked like formed words but jumbled letters scattered across the page.

Her plate scooted across the table. The fork clinked against the cheap white glass on which her half-eaten slice of pie sat. She gnawed on the inside of her lip. Was he seriously eating her pie?

"What are you doing here in the middle of the night?" he asked.

She flinched at his voice and turned a page as if she could make sense of the printed words.

"Does Vic know you're here?" he asked, lightly tapping the fork against the plate.

Sharon lowered the book, laying it on the table, and met his eyes. In the light of the diner the blue in them was more intense than what she recalled. And they were smoldering and sexy as hell, and the way they watched her made the inside of her thighs quake. She took a deep breath, fighting the urge to literally crawl across the top of the table and straddle his waist where he sat. She wanted to tell him the truth about her and Vic but she figured it wasn't her cover to blow, so instead she said, "Vic doesn't control me."

Give in to Me Excerpt:

Scott walked fast, still hanging on to her hand. He'd punched Troy right in the face. Taken up for her, something no one had ever done. Jennica's heart swelled with appreciation, followed by an anxious panic racing through her veins. In a matter of minutes they would be at her childhood home. There hadn't been much time with him…not what she needed. "Scott."

He didn't respond, just charged ahead. A man on a mission to drop her and her giant baggage off where he'd found them. A massive lump formed in her throat, blocking her words. She wanted to explain. Tell him about Troy and what he'd done. Let him know why she was so screwed up, but nothing came out.

She glanced at the house with a quick mental note that all the lights were out as he led her by the front walkway and through the manicured grass, not stopping until they were hidden from the streetlights under the carport. Once there, he released her hand and took a few steps, pausing at the edge of the light. The darkness kept her from seeing his expression, but his silhouette against the moonlit night sent thick surges of frenzied tension straight through her, making her chest feel caved.

"You didn't deserve…" he said, in almost a whisper. An angry one. "Is he the reason you think you're messed up?"

She didn't answer. She didn't need to. He knew. She could tell it in his voice, see it in his stride as he moved toward her. Felt it in his touch as he cupped her face with his hands, lifting it so her tearful sight had no other choice but to look him straight on.

"You can't believe him. You're no one's trash." Scott's eyes seemed to grow darker, pained, fixated on hers. Lost in them, she couldn't look away. Couldn't speak. "You are beautiful…so beautiful it hurts." He bent down, resting his forehead on hers. "I would do anything to have you."

Jennica swallowed hard at the way he'd spoken, slow and determined, as if those words were a concentrated version of everything he'd ever wanted to say. And she understood why. Through all the confusion in her mind, the war with the tug in her chest, the burning need to touch him, she realized, she felt the same way. "Then have me."

Lynette slipped her shoes off, rolled her jeans to her knees, and dipped her feet in the cool lake. A massive weeping willow loomed overhead, by the light of the night the cascading leaves looked like a flowing waterfall.

She stared at the tree for a moment then flashed Ty a smile. "Thanks for bringing me here."

"Sharon and Kyle are pretty great. I've been to their house, seen the tropical paradise backyard, but this… I had no idea it was so beautiful. No wonder Kayla asked to have her wedding here." She raised an eyebrow, gave him a teasing grin. "Have you decided yet if you're going?"

"Well, if you do go, be warned, there will be dancing." Lynette plucked her feet from the water and stood. She grabbed her phone from her front pocket and searched through her music. "You might want to practice. After all, there's no better way to woo the ladies. What will your date think if you're not fully prepared to swing her around the dance floor as if you own it?"

"Are you saying I'm a bad dancer, Miss Brooks?"

"Nope. I'm seizing the moment." She hit play on her phone, and a slow melody filled the silence of the night air. "Dance with me."

"Here?" he asked, glancing around at their surroundings.

"Of course! Why not?" Lynette grabbed his hand and pulled him to his feet. The hint of a smile tugged at the corner of his mouth. The gesture caused all kinds of crazy little birds to take flight in her chest.

Ty took her other hand, maneuvered her in a half twist so her back was to his chest, then spun her out to the extent of his arm and back in where they faced each other. His right hand landed on the small of her back and pulled her close. He chuckled and did some kind of waltz type step to the music. Placing his palm on her chest, he pushed until her back arched in a way she never knew it could. Slowly, Ty ran his hand the length of her torso, leaving a trail of unbridled heat that sent every ounce of blood in her body gushing straight to her core. By the time he jerked her back up her entire body had become a trembling heap. When their eyes met, she nearly came apart and fell through the cracks of the wood decking. What the hell?

Lynette wrapped her arms around his neck to keep from sliding through his hold, and tried her damndest to control her lungs. She swallowed hard to tamp down the shaking in her throat. It didn't work, and her words came out sounding weak, quavering. "Someone's showing off."

"Someone asked for it," he said, low and resolute.

Breaking Out (MF)
Grae McTavish
In Shelf
$1.99
Tweets by
sirenbookstrand