After dreaming of the same man night after night, Kaylee realizes she’s fallen in love…with a vampire. Too bad he only exists in her imagination. After a trip to the mall and a strange ornament shop, Kaylee finds herself back home, only it’s not quite the same. The man on her couch who looks dead can talk into her mind and he insists she’s the one who isn’t supposed to be alive. After a year of living without his beloved mate, Gregori decides to end his life. Too bad he picked the wrong night. After thieves break into his beloved mate’s home, he finds what can only be a Christmas miracle in the form of his mate, alive and well and as snarky as ever. Given a second chance, Gregori sets out to convince Kaylee that her place is at his side. 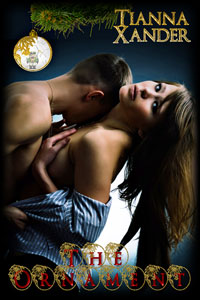 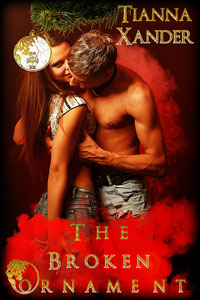 Kaylee turned and stopped dead. The words died on her lips as she saw her dream lover lying prone on the couch, his eyes open. He looked dead. She brought her hand to her throat, her fingers nervously tapping the side of her neck. He wasn’t real. He couldn’t be real. He was a vampire and vampires just didn’t exist.

What in the hell is going on here? She returned home to find someone molesting her things and a dead man on her couch. She turned toward the Christmas tree in the corner and frowned. She could have sworn she left the lights on and the music playing. The silence creeped her out, even when she didn’t have a burglar laying on her carpet, most likely peeing his pants from the fifty-thousand or so volts of electricity she’d just bagged him with.

Behind her, the robber’s phone played Jingle Bells as someone attempted to call him. They’d just have to call back later, preferably after the police dragged him out of her house.

Biting her bottom lip, Kaylee made her way over to the couch. Slowly, gingerly, she reached out to touch his cheek. She had to touch him at least once, even if he was dead. “You’re a dream. You can’t possibly be real,” she whispered.

I could think the same of you, my love.

Kaylee knew at that moment that he wasn’t dead. Somehow, he spoke into her mind the way he always did in her dreams. But why wouldn’t he move?

“Why do you look like a dead man sprawled across my couch?” She got the impression that he wanted to shrug, but was too weak to do so.

Why was he so weak? In her dreams, he could do anything. He could shift his shape into anything, he could fly, he even had preternatural speed, running so fast, he was nothing more than a blur.

I am dying. I haven’t fed in over three months. When one of my kind does this, we grow weaker and weaker until we finally collapse like this.

“Why would you choose to die on my couch?” She narrowed her eyes. “Am I even awake or is this all another dream?”

He chuckled into her mind, his voice growing weaker and weaker as though he kept getting farther and farther away. It took me quite by surprise. Believe me, had I known I had gotten so weak, I would have lain on my back and closed my eyes, instead of falling face first onto your couch. It’s not comfortable at all.

Kaylee finally realized this was nothing more than another dream. Her dreams always started with Gregori convincing her to let him feed. Only this was the first time he’d been too weak to take her in his arms and nuzzle her neck.

Shifting her weight to one leg, Kaylee rested her hand on her hip and smiled. “So…I suppose you expect me to feed you?”

I wish you were alive so you could. However, I saw your decapitated body myself. A gang of slayers found you, knew you were mine and took your life in an effort to stem our population. You are the dream, my love. He smiled gently into her mind. Like all of the dreams I have had of you over the last year. They were nothing but visions of a lost love, the wishful ramblings of a desperate man.

“Unless you received a memo I missed, we aren’t dead.” She gestured to the man lying unconscious on the floor. “Do you really think ghosts Taser people?”

I assume that we are both dead. I have starved to death as was my plan. Life without you is unbearable.

That was the most romantic and idiotic things anyone had ever said to her. Kaylee heard a bump coming from the stairs, assumed it was the other burglar and continued through their mind link. Oh, puhleeeze. You have somehow managed to convince me to feed you in every dream. Why should this one be any different? Besides, what if this was the last time she dreamt of him? Death was rather permanent, even in dreams.

Memories of Paradise
Tianna Xander
In Shelf
$4.99
Tweets by
sirenbookstrand