The Other Man (MM)

Who is the other man?

He’s an accident waiting to happen: the skateboarder round the bend, the smiling barista with the extra hot mocha, the computer geek eager to retool your mate’s hard drive. He’s a relationship gatecrasher bound by no rules and with no sense of fair play. Like Caesar, he comes, he sees, he conquers. On the flip side, you or I can be the other man, charging in and breaking the bonds of a committed relationship without a thought to the pain and misery inflicted upon the injured parties. Face it: We’re not all innocent bystanders in other-man scenarios.

The Other Man is an artistic collaboration by and about gay men and their relationships. If you’ve ever been the other man, had him invade your life, or are just plain curious about this beguiling, unpredictable and dangerous creature, then this anthology of personal essays is for you. Twenty-one of our most acclaimed authors, many Lambda Award winners and finalists, write candidly about either being the other man, suffering the other man or having their relationships tested by infidelity. What they tell us is we must take heart, it does get better and one day our luck is bound to change. We’ll survive the bumps and detours in our relationships and weather the storms, or resolve to move on. Along the way, we’ll hope to meet someone new and simpatico, maybe even our long-awaited soul mate. Life will be good again. Or will it?

A portion of the proceeds from the sale of this anthology will go to the It Gets Better Project. 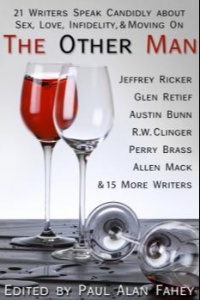 The Other Man (MM)

EXCERPT FROM "A Brief History of the Divorce Party" by Rob Byrnes:

The gay men were sympathetic and ambivalent about whether or not the party should go on.

The straight women were sympathetic, but insisted I hold my head high and continue with plans to co-host that damn party. My partner -- my ex-partner, that is -- would be shamed by my grace. And it wasn’t as if Sam would be tacky enough to bring The Other Man, right?

Right. But more on that, too, soon enough.

Oh, and the women told me -- each and every one -- to take the furniture. Seriously. Four straight women and four uniform and unsolicited opinions: “Take the furniture.” Is this a Female Thing?

I didn’t take the furniture -- first, I had no desire; second, where the hell was I supposed to put an apartment full of furniture when I was all but living on the street? But I did agree that the party should go on.

I would hold my head high and be a most charming host.

It would be a breeze.

You know, taking the furniture and setting up camp at the curb would have been easier.

As I walked up the front stoop to the West 89th Street apartment I’d shared until 174 hours earlier before my self-imposed exile, I polished two rules in my head until they gleamed.

Rule One: Hold your head high. You didn’t create this fiasco, and you have nothing to apologize for.

Rule Two: Stay cool. Don’t let anything get to you.

Both rules fell apart within roughly eight minutes. But you probably saw that coming. Everyone else certainly did.

The fact is this: My temper was a kettle of scalding rage, at any moment just seconds away from a major eruption. Yes, my personality was perforated with flaws, but I didn’t deserve this.

I’d just been dumped; no, not just dumped, but dumped and replaced by someone just slightly more than half my age.

I was also suddenly homeless and less-suddenly broke. It was easy to overlook “broke” when I had a home. Now, not so much.

And it was days before my birthday. Days before Christmas. Days before the Y2K New Year’s Eve, which promised to be special, if for no other reason that it’d be the only time we’d ever cross into a new millennium.

So when I walked into that apartment one hour before guests were expected and saw that Sam hadn’t done a thing to prepare -- hadn’t picked up, hadn’t cleaned, hadn’t even showered yet -- my Irish temper got a little, well, Irish.

Self-awareness aside to the reader: I know I don’t do “angry” very well. When I am angry, I’m not Bette Davis drily spitting venom. I’m more like the Incredible Hulk on a very bad day when he’s also out of coffee and traffic is backed up. But once the anger dissipates, I’m fine. Mostly.

So after falling apart because Sam was still wandering around in hospital scrubs early on a Saturday evening without even the questionably passable excuse that he was a surgeon, I got over it and got down to business.

And those guests did arrive. More people than I’d remembered inviting. The irony is if there hadn’t been a break-up the week before, half the people wouldn’t have shown. They didn’t come because they were unaware of the underlying drama; they came because they wanted to see it play out, live and in-person.

If they wanted entertainment, they got it. It was less cage fighting than tennis, but we still offered our guests a spectator sport.