South Dakota novelist Jackie Sue Davyss-Brennan is alone in Hollywood for the premier of the movie made from her book, Mayan Heart. In her contract for the book rights, she specified that the role of her main character be played by David Salizon, a handsome, well-known actor. When Jackie and David, both married to other people, are thrown together at media events for the promotion of the film, they soon find they are attracted to each other, and temptation, ever present in Hollywood, becomes something neither can deny. 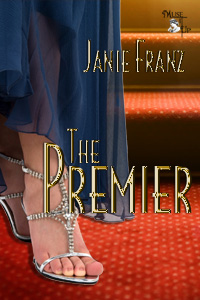 Sam Mattingale’s office gleamed with chrome and glass. A bank of windows exposed the city below like a cubist painting in muted shades of gray and dull blue. Author Susan Davyss, feeling both ill at ease and excitedly decadent in the glamorous surroundings, sipped champagne at two o’clock in the afternoon in the comfort of a black leather and chrome couch. She was in Los Angeles to celebrate the premier of Mayan Heart, the movie made from her book.

“How was your flight out, Ms. Davyss?” Sam Mattingale asked.

“Oh, I didn’t fly. We made this a family trip. My husband’s in San Diego with the children visiting his brother. They’re taking in the zoo. We thought it best not to have the children underfoot during all this excitement. Ted said it was my glory, and I should bask in the accolades without someone yanking my jeans, needing to go to the bathroom.”

Sam laughed, his gray mustache curling around his smile. He looked more like a fatherly lawyer—in fact, very much like the one who had read over her contract back in Aberdeen—than a producer. “I’d forgotten about your little ones. My own kids are grown. One’s an agent in Burbank, and the other’s a cinematographer for MGM. Both are too busy for children—or at least none they’ve told me about.” He rose from his chair near her. “Here. Let me freshen your drink.”

“You’d better not. One, and I can navigate to the door unaided. Two, and I’ll need help.”

He laughed again. “We’ll provide all the help you need.” He took her glass to a small bar in the corner of the room. “You have much to celebrate. The film looks like it will be successful and very profitable for you. You had a shrewd lawyer who negotiated a tight royalty contract. I didn’t think they bred that kind of lawyer in South Dakota.” He handed her another glass of champagne.

She held the glass but only sipped its contents. “Gus Haickman’s a South Dakota transplant like myself. He comes from a long line of Tennessee horse traders. He did a fellow Southerner a good turn.”

“Quite a good turn,” Sam said, sitting once more and swinging a long leg over his knee. “If this movie paces the way I think it will, you’ll be able to move out of the wilderness into civilized country.”

Susan smiled. “I’m not sure we’ll do that. We appreciate the advance though…I don’t dare spend it yet. I still feel someone’s going to come and take it back.” She laughed. “The book sales have been steady, and that provides us with a degree of comfort. We’re putting as much as we can into college funds.”

“Your book sales should increase. We’ve noticed quite a trend toward reading the original after a film like this comes out, and that leads to reading other books by the same author. It should be very good for you.”

“I think I’m going to need lead shoes to keep from floating away after all this is over. I appreciate your including me in the celebrations.”

Susan’s eyes sought refuge in the bubbles of her champagne glass while she smiled with some embarrassment. “I wrote the story around eight years ago about a stranger I’d seen while I was in Arizona visiting my father. As the story developed, and I saw more of David Salizon’s work, I discovered during the eighth and last rewrite that the character was, in essence, David Salizon. It was a rather eerie revelation.”

“A very profitable one for us, I hope.”

The intercom buzzed. Sam Mattingale stood to reach over his desk and punched a button.