The Presents and the Past (MM)

Noah and Angel were childhood sweethearts and teenage lovers. With youth comes unrealistic ideas sometimes, and also bad choices. But just about the time they reach manhood, Noah’s demons pull them apart.

Seven years later, he gets a second chance when Angel returns to town. Hoping everything can be different, Noah sets out to remind him how wonderful their past was by secretly sending him thirteen gifts commemorating their happiest times, one on each day beginning December 11.

By Christmas Eve, Noah hasn’t heard a word back, and wonders if Angel even recognized the meaning of the offerings. When Angel does get in touch, he only remembers the bad things that drove them apart. Can Noah remind him how good they had it, too? 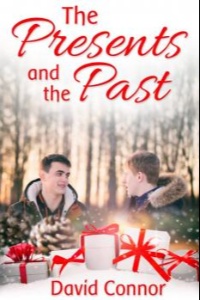 The Presents and the Past (MM)

“While I’d already been taught to feel like a sissy for bawling my eyes out -- ‘Don’t you dare cry this time,’ my father had warned in the car -- Angel rubbed my back and held my hand. Those were two things I probably would have never initiated with another boy. The moment it happened, though, and every single one of the hundreds of times he touched me after that over the next fourteen years, I loved it. Playing tag in elementary school, I wanted Angel to catch me. Arm wrestling in junior high, I tried really, really hard, Troy, not because I wanted to win, but because I didn’t want to let go. There was something about Angel’s touch I needed. Something gentle and reassuring, as opposed to ...”

Pausing for redirection, I tried to recall how many cookies I’d devoured.

“I can still feel his fingers on my cheek the day I cried in front of him again.” I touched the spot Angel had the day we’d said our last goodbye in Cambridge, Massachusetts.

“You’re always sorry.” He was pacing around in the train station parking lot, the gravel under his shoes crunching like my morning cereal. That was the image that came to my pounding head. Mine had been so loud, I couldn’t finish it that morning -- the morning after. All grown up, Angel had a thin black moustache and a goatee. His chest was broad, his waist narrow, his ass so perfect in his tight, white jeans I could have stood there and stared at it all day if he wasn’t sending me away forever. “But Noah ... you never change.”

Angel wanted my promise to be true. I could tell. We both doubted it though. Then he took my hand. “I hear the train.” He let go of me and we started toward the platform. He did, even though I was the one who was leaving. I followed. “You shouldn’t have come,” Angel said.

“It almost worked this time.”

“Almost, Noah.” He’d said it angrily. “Almost,” and then his voice was tinged with disappointment and sadness.

“I’ll quit. I’ll never ...” I couldn’t lie to him. “You really want me to leave, even after we finally got to be together.” I reached for his hand. That always made things better.

“It doesn’t matter what I want. You have to go.”

“Yeah. Thank God I didn’t screw everything up for you here.”

“Tell me I can come back, though ... or that you’ll come to me. Just tell me we can have another chance. I love you.”

Angel wouldn’t say the one thing I wanted to hear. He said the word I dreaded, though, and it hurt. “Goodbye, Noah.” Then, as the train pulled in, he touched my cheek a final time. “We’ve tried and tried. I hate this feeling, Noah ... all of them ... the ones that get all mixed up together whenever I’m with you. I can’t do it anymore. Never again. It’s not going to work. You’re all out of chances. Go.” He turned his back on me. “Goodbye.”

“I don’t like to remember the last time Angel touched me.” That was the all I offered Troy from the journey I had just taken in my mind. “But I can ... quite vividly.”

Her Beast (MF)
Sam Crescent
In Shelf
$3.99
Tweets by
sirenbookstrand