The Raven Who Caught the Canary

Revolutionary and pirate, Luther Corvino, seeks revenge for a lifetime of hell. The German general responsible is the same one building a tunnel to Britain. Kill the man; blow up the tunnel. These tasks should be easy compared to the fights Luther has faced —until he runs into the one woman he’s never forgotten. Too bad she’d rather turn him in than play kiss and make up.

Eva Canari has never forgiven Luther for abandoning her in France. Caught for spying, she's been recruited by the Germans as a consort and agent. She'll do anything to get her nightclub, La Roux, back in her possession, even selling out her ex. Trouble is, she's having a hard time betraying him when his touches are sweet heaven, and his charm the devil's own.

Can Luther and Eva rekindle their love, or are they ensnared by a game they may never win? 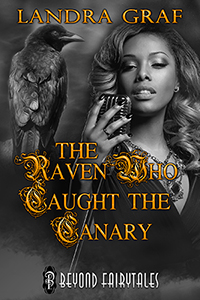 The Raven Who Caught the Canary

“Let me help you inside.”
“I think I can get there on my own, thank you,” she replied taking a few steps back to get a better vantage point.
He stepped in close. “My little canary, it’s best we get you indoors.”
She stiffened as memories flooded her. Those blue eyes, the moment they met. Her on the stage belting out something about love being for fools. He’d stood there, a predatory gaze focused and intent. Instinct had her taking brisk steps to get as far away from the man who’d made her act an idiot all those years ago. Why the hell— How the hell did he get here?
Escape failed when her slipper snagged on a rock, and he grabbed her arm and held her upright. He’d always been able to move her around like a ragdoll, but, in this instance, he didn’t let go. Instead, he guided her into the house, across the foyer, and leaving her by the piano bench.
“Sit,” he commanded as he closed the doors, shutting them into to the room alone. “We’ll need some privacy.”
His firm, assured steps brought him back to her side. Where had he come from? How had he found her? She’d once thought of him as her hero, her personal one. When he hauled her up into his arms, she closed her eyes, the savage kiss he placed on her lips stirring up an arousal she hadn’t experienced since he’d stranded her on this godforsaken continent.
She melted into his familiar embrace. Knocking his cap from his head, she twined her fingers in his hair, their tongues dancing. He groaned. Then passion fell away to reality, to hard truths. Eva bit his lip, and he dropped her. Luckily, she possessed enough sense to land on her feet.
“You’re not happy to see me?”
Growling, she hauled off and slapped him. “Go to hell.”
“I think I’m already there.”