Lucian Salvatore returns to Clover East after his grandmother calls him home to take care of the family's recording studio. This is a welcome trip after the tragic loss of his boyfriend.

Nate Lockwood is the man who practically runs the Salvatore studio. He suspects he’s going to be replaced once Lucian comes home to take over the business. But Nate doesn’t plan on leaving Clover East so soon, at least not before he solves the mystery that’s the real reason he came to the small town in the first place.

Will Nate be able to discover what happened to his aunt who disappeared in Clover East so many years ago? What does her disappearance have to do with Lucian’s family ... and the haunted recording room in the studio where they both work? 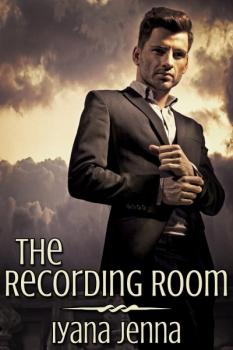 "You have family here? Clover East is such a small town. I don't visit often but I think I know who all the families are around here."

Nate was tempted to ask if Lucian knew Janette Madison, Nate's aunt, but he was afraid it would be too soon, too abrupt.

"Nah, I don't have family here," he said instead. "I had just thought one of my aunts stopped by this town, but I'm not so sure myself." There, he had said it.

"You haven't had any news from your aunt?"

"You mean she's missing or something?" Lucian frowned.

"Honestly, I don't know if she's missing or just doesn't want to be found."

"Did your family ask you to find her?"

Nate played with his bottle. He wouldn't look at Lucian. "No one asked me to locate her because there's no one else out there. She's the only family I have left. That's why I wanted to find her."

Neither spoke after that. When Nate lifted his head, he found Lucian staring blankly at a spot on the table. He wanted to ask about him instead but Nate couldn't bring himself to open his mouth. His mind was whirling with the thoughts that until now, years after he first came to this city, he still couldn't find Aunt Janette.

I'm sorry about your loss and I'm very sorry I didn't come to the funeral. I was halfway around the continent and I was quite short of money. But don't worry about me. I met someone and he asked me to go live with him. I don't know if you've heard of Clover East, a small town in Illinois? I hadn't, before this. But I have a good feeling about this place, Nate. If you ever want to come to stay with me, you'll be more than welcome.

"She sent me a letter, literally inviting me to be with her."

"She met a man who asked her to come to Clover East. She understood I had just lost everyone so she wanted me to stay with her. She sounded so happy at that time. There were no signs that she wanted to hide. Something bad must have happened to her."

"Did she mention any names?"

Nate shook his head, and practically jumped when Lucian clasped a hand over his. When did he get so close?

"You're not alone anymore. We'll search for your aunt and we're going to find her. Together."

Nate gawked, first at the hand that was warm against his skin and then up to Lucian’s soft green eyes. The man was nothing like the cold, arrogant one Nate had met earlier that morning. He was almost afraid at the sudden change.

"Does my grandma know about this?"

Nate had never thought about why it had not crossed his mind to talk to Helen about it. She had never asked him why he came to the town, thus, he didn't feel the need to mention it.

"I don't know," he said simply to Lucian.

Lucian pursed his lips. "I just thought it might help, you know. She's lived here all her life. She must notice when there's a newcomer in town, especially when the person suddenly disappears."

"I found it strange," Nate said slowly, "that no one seemed to hear or see anything about her. It's like she never set foot in this place."

"Are you sure she was really here?"

Nate said nothing and took out his cell-phone. He opened the picture albums and scrolled down until he found what he was looking for. He showed the picture to Lucian, who scrutinized it like a doctor checking on a patient on an operation table. Nate could almost see through Lucian's eyes his aunt smiling at the camera, her long black locks blown by the wind. She posed in Clover East's city square in front of a group of tables belonging to a café there.

"Yeah." Nate knew exactly what Lucian was thinking. If she'd been with someone, they might have been able to recognize them.

"I wonder who took the picture."

"She could've simply asked a passerby to do it."

"You're right." Lucian gave him back the cell phone. "She only sent you that?"

"So she was really here but we have no idea for how long and whom she met."

"I was worried about her." Nate sighed, and when he looked up, Lucian's eyes bored into his.

"We'll tell my grandma when she's home and start an extensive search."

Nate didn't know what to say. He felt as if he was drowning in Lucian's gaze.

"O-okay," he said finally, after he realized Lucian had cleared his throat several times, awaiting his response.

"Good." Lucian heaved a deep breath and stretched out, pulling his arms high above his head, and Nate was unable to keep his eyes off the scrumptious sight. "So, will you stay for dinner?"