The Relics of Nanthara: The Secrets Revealed

Determined to find the truth to the ancient prophecies, young Courtar defies his elders and journeys alone where he gains the unexpected friendship of a Dwergen, a shunned race once thought to be extinct. After hiring a jailed Alkanien as a guide to Mhoren, they begin gathering strangers of various backgrounds who, unbeknownst to them, complete a foretelling of the formation of an alliance destined to destroy the abomination. Yet the group’s inner conflicts could prove a thorn in their stability and negate the promises of victory.

Finding two surviving soldiers whose village was destroyed, they escort the alliance along a treacherous path toward Mhoren. Their undertaking almost fails during a harrowing escape from enemy troops as they flee into the kingdom of Mhoren. Gaining the friendship of Mhoren’s hierarchy, the alliance’s mission becomes clear after exposing a far reaching sinister plot led by the king’s half-brother, Fendis. His dark motives encouraging the Dark One’s rise to power come to fruition when the king is assassinated, forcing the alliance’s pursuit to his home where they uncover important secrets and hidden clues, including the location of the Crown of Sovereign. With clues in hand, the alliance heads north into the Alkani realm of Isenvayle where good relations are established. Realizing a foulskin horde invaded the Alkani kingdom, the group detours east to evade invading troops and are thrown into battle in a neighbouring realm. As hardships and trials abound, the alliance reaches Maugal Deep where the Crown of Sovereign lies. After battling a vicious demonic messenger, an unforeseen twist and an unexpected encounter befall them, jeopardizing the entire mission. Can the alliance gain possession of the crown and stop the commencement of the Dark One’s domination before they kill each other? 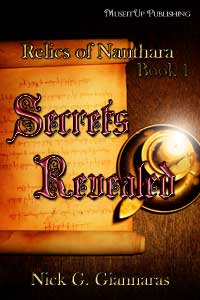 The Relics of Nanthara: The Secrets Revealed

“Yes, Gesach, these are the scrolls. And as we agreed, you can have the phylactery.” Sir Angelo reached for the prized container. Then he stopped.

“But then again, Gesach. You despise my kind more than any other being who walks the face of Nanthara. I am the ultimate antagonist to what you stand for. Your evil cannot be allowed to thrive. And if a Temple Sovereign knight ever has the ability to rid the world of such a demon as you, they will do so.” Sir Angelo stepped back next to Dreg, the paladin’s eyes lowered, his teeth clenched. “I have that ability.”

“Enough!”Gesach said, his voice grating across the air like hot coals sizzling in cold water. “Such debauchery from one whose walk is supposed to be pure. Your heart is as tainted as mine and your blood runs thick with refuse.” Gesach arched his head backward in a partial tilt as another short cackle left his decayed throat. “Too bad you have come all this way to have the scrolls in hand and die with them!”

Gibbering in a foul dialect, Gesach waved his frightful staff, urging his skeletal minions to attack before disappearing from the top of the building.

Dreg raised Brighthammer and with a roar slammed his shining hammer down only to land in solid dirt.

Boren looked past the settling dust where Brighthammer sat embedded into the hard earth. “The trinket is gone!”

As the party stood stunned, E’Umae looked up with eyes wide open. “What are those?” she asked pointing to the western most ruins.

Spectral forms of ancient warriors dressed in polished brass armor flowed toward them with gleaming weapons brandished in incorporeal grips. Hollowed sockets sunk in gaunt faces stared them down and legs ending in wisps of smoke propelled these dreaded warriors with surprising speed.

Before anyone could flee, Gesach reappeared near the armory and attacked the Bloodfists by surprise. Orange beams of energy sprayed forth from his crooked out-stretched fingers, engulfing several of the Bloodfists in raging flames. Charred and burning bodies slumped to the ground as the Dymwren snarled a sinister grin at his opponents.

The Rhöengard officer dropped to his knees, pleading to Gesach in fearful tones with arms held out submissively. “Have mercy on me! I was kidnapped by them. They want to destroy you, not I.”

Gesach snarled. “You and your men have held me captive here against my will.”

“It was not I, My Lord. My officers ordered me to do so, or they would have my head,” the officer said with tears rolling down his horrified expression.

A deep chuckle emanated from the Dymwren. “Allow me to help them.”

With a wave of his hand, Gesach levitated a rusted sword lying near the outside of the armory. Spinning like a tornado, the sharpened stake flew at the officer and decapitated him in one swift stroke. His lifeless body fell into the powdery skeletal remains in a pool of blood.

The undead clashed with the allied troops in a dance of lethal weapon blows and skillful parries. Bones were broken, flesh was torn, and armor was dented and gashed amid the din of battle. In trying to clear a path to the bridge, the allies’ escape was hindered by the appearance of more warriors pouring out of the woods.

Two of the pursuing Valgaunts caught up with the fleeing alliance and engaged Dreg from behind. When he turned to face them he noticed Brighthammer glowed as if reflecting the sunlight from above; yet clouds covered the skies. With a barbaric growl, he swung at the first Valgaunt. The transparent figure shuddered under the weapon’s impact. A high-pitched screech filled Dreg’s ears.

Dreg and a second Valgaunt exchanged deflecting blows until the barbarian slammed another mighty swing into the Valgaunt’s side. A second bellowing screech faded away as the image of the ghostly warrior evaporated into blue smoke, his armor and weapons falling to the ground in a clanging pile.

With Boren assisting Dreg, the rest plowed their way through the battle toward the stone house. Sir Angelo noticed Gesach was being pummeled by two Bloodfist elders. Angered from his adversaries’ successful attacks, Gesach stepped back, slapped his distorted hands together with a growl, and vanished.

E’Umae and Eriss looked back to observe Dreg and Boren. Eriss stopped, turned, and ran back toward the two battling warriors.

E’Umae’s mouth dropped. “Where are you going?”

“The trinket! It’s still on the ground!” Eriss said.

E’Umae stood in disbelief until she saw the phylactery lying in the dust of the battle. “Gesach tricked us!” she said.

Eriss ran at full speed past battling skeletons, Valgaunts, and Bloodfists toward the phylactery. Weaving through bodies and slashing weapons, she spotted the trinket lying half buried in the dirt. E’Umae screamed as two skeletons with battleaxes stepped on either side of the trinket with empty gazes transfixed on Eriss’s approach. Instinctively, Eriss tucked and dropped into a forward roll and grabbed the phylactery as the two undead warriors’ weapons

whooshed inches above her.

Two energy bolts slammed into the undead soldiers, turning both into smoking fragmented remains. Eriss jumped up out of her roll, landing near Dreg and Boren who continued crushing the decayed troops around them.

“I got the phylactery! Run!” she yelled.

Sir Angelo swung his last attacks then ran for the bridge. The alliance sprinted past the Bloodfists, yelling at them to retreat, but they wouldn’t.

“Ganeth Ra, fall back!” Sir Angelo said.
Ganeth Ra bellowed above the chaos. “This battle is not over yet.”