The Scent of His Woman (MF)

Kennedy Cole doesn’t know who she really is. Orphaned as a child, she was adopted by an amazing family and raised as their own. So, when she begins to act strange, they arrange a vacation that’ll bring them all closer together. It works, the northern wilderness seems to sooth something deep inside her, that is, until she smells him and everything in her world shifts… including her.

Reclusive cougar shifter, Trace Grady, hates humans almost as much as he hates his own kind. A quiet life in the northern forests of Canada is the only thing he desires, until she crosses his path and ignites a burning desire to mate so intense that it takes every ounce of willpower to stop himself from pouncing on her delectable body.

Walking away isn’t an option when all you can think about it your mate, but what if it’s for her own protection?

The Scent of His Woman (MF)

“You’re so beautiful.” Trace’s rumbling voice made the butterflies in her stomach come alive again. They were alone, with nothing between them but the air they breathed. No people, no animals, no shift, and no hesitation. Kennedy dropped her hands to the hem of her shirt and pulled it over her head, revealing her bare breasts. She smiled slowly and walked forward into his waiting arms.

He lifted her so easily, his strong arms settling at her waist and then wrapping around her as she twined her legs around his hips. Instantly, he settled her lower, so his thick erection pressed against her most intimate space. The pressure made her moan and throw her head back, exposing her throat and breasts to Trace’s waiting lips.

He took her invitation, bowing over to touch his lips to her neck. He feasted, trailing his tongue over her skin, lapping at her jawline and collarbone until she couldn’t draw a breath. Kennedy bucked her hips, riding the exquisite hardness that was bringing her closer to the edge.

Trace moved one hand from her back and lifted it to her left breast, cupping it in his hand. His mouth shifted from her throat, capturing her mouth, just as his rough fingers closed around her nipple. Kennedy gasped into his mouth, shocked at her own reactions. Never before had she enjoyed having her breasts touched, never before had she gasped and moaned and rode a man to…

Kennedy screamed as an orgasm hit her like a locomotive, slamming into her too fast to see it coming. She squeezed her legs around Trace as waves of pleasure washed over her, sending spasms through her entire body. As they ebbed, Kennedy felt her legs give way and she slid, utterly spent, down his body while Trace’s hands held her. 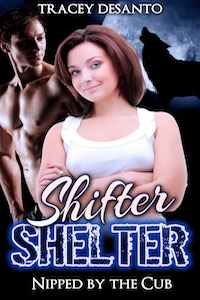 Shifter Shelter: Nipped by the Cub
Tracey DeSanto
In Shelf
$2.99