“Right then. Lights, lights, lights.” The more she moved inside, the less the headlights illuminated the interior of the cabin. “How the hell am I expected to find my way around when I can’t see for shit?”

In almost total darkness, Hannah suddenly felt a strange sensation course through her body. It was hard to quantify, but presented as a gut instinct that churned her stomach to mush. There was something wrong here, very wrong. This unnerving feeling of hanging paranoia was nothing she could put her finger on, nothing concrete, until…

She gasped in undiluted terror when she felt strong masculine fingers dig into her throat in the darkness and yank her backward with such force that she instinctively knew her life was in danger.

Adrenaline flooded her body, and her limbs trembled uncontrollably, but not from the cold this time. Hannah scrunched her eyes tightly shut when a tube of steel was forcibly rammed against her temple. Such unwarranted aggression against a woman on her own made her whimper with fear.

Panic forced the unpleasant taste of bile into her mouth, and she thought she might vomit. Hannah was frightened, shit scared even. This was new territory for her. Territory she didn’t want to explore. Paralyzed with fear, and rooted to the spot, she was acutely aware that he stood right behind her, his body creating a wall of unyielding muscle, his hand still painfully gripping her throat, his hot quick breath panting like an animal against her cheek.

She needed to speak, needed to reason with her aggressor, but she was so terrified she found it almost impossible to get her words out. “Pl–please… Pl–please. Pl–please.” This was the stuff of nightmares, only it wasn’t a dream, it was real, and Hannah felt scared enough to piss herself at any moment. She needed to get her head together if she wanted to survive.

Think, Hannah. Think. Keep it together, girl. It’s your only chance.

Whoever this sick individual was, she wasn’t too proud to beg for her life. “Please…I…Please…I don’t want to die. Please don’t kill me.”

When he spoke for the first time, his voice was thick with discontent and aggression. “Shut the fuck up, lady. I’m too tired and weary for this shit. Did Parnell send you?”

She heard the safety catch ominously click off as he pushed the gun even harder against her temple. “Don’t play the innocent with me, lady, because right now I’ve got nothing to lose. I’m going to ask you one more time. Did Parnell fucking send you here to kill me? If he didn’t, you’ll need a good reason to convince me why you’re here right now.”

Oh God, she could still hear his voice. It was cold and compassionless, and totally devoid of mercy, but at least that meant she was still alive. If she could just build on those embers of hope, maybe appeal to his better nature.

“My–my–my boyfriend and I, we split up, and I needed to get away.”

“Anyone else with you? How many of Parnell’s guys are surrounding the cabin right now? It wouldn’t be the first time the bastards have used a woman as a decoy before they break down the door and shoot some dumb son of a bitch through the fucking head.”

“No. No–no…You’ve got it wrong. Please believe me, I’m on my own.” Tears sprang to her eyes then, and so desperate was she to cling onto life, she’d use them to best effect. “Please. You have to believe me. I’m just a woman on my own.” She sobbed. “And this is my parents’ cabin, and I don’t know what you’re talking about, and I don’t know anyone called Parnell.” She broke down completely then and wept inconsolably, hoping deep down that he’d take pity on her and allow her to live. “I’m just so frightened. Please let me go, and I promise I won’t say anything to anyone.”

“Hmm, good acting, lady, but I’m not convinced enough by your performance to let my guard down. I don’t trust you. Right now I don’t trust anyone.

Hannah adored the way those beautiful blue eyes sparkled with desire as he brushed a couple of stray hairs from the corners of her mouth before kissing her passionately on the lips. “Listen to me, Hannah. Next time, I’m gonna love and adore every inch of your body for hour after hour, and however much you beg me to stop, I won’t. I’ll keep going, pleasuring your silken curves until you’re spent and unable to climax any more. After that, I’ll hold you in my arms until we both come down from that wonderful, natural high we’ve created together.”

“Yes, oh, dear God, yes, Mitch.” Not only was he a writer, and in her opinion the best the world had ever seen, but he was also a poet, too. Just the way he spoke made her pussy moisten with need, his velvet delivery and choice of words the equivalent of warm, melted chocolate trickling over her skin.

“Only, you’re so fucking beautiful, that I need to be inside you, right now. Just as you want me to be.”

“Yes, oh yes.” Her words were breathy, and although she couldn’t see herself, she knew her whole body flushed pink with sexual arousal. “Your cock is right there. I can feel it teasing me, taunting me.”

He smiled, and then kissed her again, even more forcibly this time, and she felt compelled to respond by pushing her tongue deep inside that beautiful mouth again. “Please, Mitch, I’m begging you. Make love to me.”

“You got it, baby.” He took hold of her hands and wrenched them forcefully high above her head, exposing her armpits, which he feverishly kissed and licked. “Mmm, such an underrated part of a woman’s body. Sexy even.” With those words, he forced her legs wider apart with his own before sinking deep inside her.

“You like that?” He started to pump energetically inside her. The glow from the roaring wood fire flickering mischievously in his eyes. “And that.” He upped his pace, his hips flexing athletically as he filled her completely.

“Yes.” High on pleasure, she instinctively wrapped her legs around him, hooking her feet together at the ankles, urging him deeper still.

Mitch was the whole package. Articulate, educated, achingly gorgeous, and with a way about him that no woman could ever resist. He’d been buried inside her for mere seconds, but already he released physical feelings and psychological emotions that had lain dormant for years. Emotions that her previous boyfriend Jake wouldn’t even understand, let alone be able to tap into.

Mitch worshipped her breasts, then licked the divide that separated them. His tongue first caressing the mysterious hollow at the base of her neck, before moving ever upward until he reached her throat, then the underside of her chin before finally his lips met hers, making her feel more vital and alive than Jake had done in their two years together.

With their eyes connecting on ever higher levels of understanding, he thrust inside her again, deeper and more dominant this time. “Oh, dear God, Mitch, you feel so good. It’s as though you’re in my womb.” He smiled knowingly, and when he slid almost all the way out, she watched mesmerized as his huge, thick prick, coated with her glistening juices, powered back inside her again, causing her mouth to fall open with sheer delight as she desperately sucked in another lungful of air. Lost in the moment and lost for words, she marveled at the beauty of this man—that rare animal, a man who really knew how to please a woman.

He tasted good as he crushed his lips to hers, the undiluted passion she saw in those big, blue eyes sensuously filtering between their bodies as his tongue forced its way inside her mouth, a mirror image of what his cock did to her sensitized pussy.

When he let go of her wrists, allowing her circulation to return, he assertively pushed her breasts together again, forcing them into impossible, sexy mounds that no push-up bra could ever hope to replicate. Relishing her newfound freedom, Hannah seized the opportunity to fist her hands into his luscious, thick locks once more. Pulling hard, then harder still, it had the effect of raising his head slightly, causing her tortured nipple to become elongated as his lips and teeth stubbornly refused to relinquish their grip on her tender peak.

“Oh Christ, Mitch.” Her previous boyfriends, including Jake, amounted to nothing compared to Mitch Brenna, because he was the real deal. 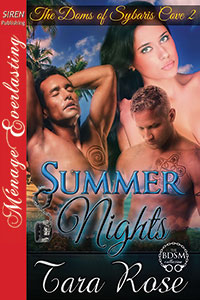