What happens when the forces of good and evil confront each other over the love of a mortal woman?

An earth-shattering secret hidden for two thousand years finally sees the light when archaeologist Claire Raines goes in search of her mentor at Cambridge University, who has mysteriously disappeared after leading the excavation of a fabulous Neanderthal find in a treacherous labyrinth of caves on the Island of Majorca, off the east coast of Spain. On her arrival, she meets with the government representative in charge of the operation, tall, dark and stunning Vincent Demarco, who menacingly dissuades her from continuing with her search. But the truth of the matter surpasses her wildest expectations when a visit to the site with the leader of the original rescue expedition, gorgeous, blonde and blue-eyed Daniel Robinson, reveals fossilized vampire skeletons. The course of events leads Claire to suspect that Vincent is behind her mentor’s disappearance, who may have fallen victim to a secret conspiracy.

But nothing is what it seems and, unknown to Claire, Daniel and Vincent are in fact seed-bearing archangels and archrivals with the common mission to find the Host and impregnate her to create a new human race as part of a divine plan. When Vincent brutally opens her eyes to the truth of her identity, she struggles against her own personal beliefs and convictions. To make matters worse, Claire becomes pregnant and finds herself swept up in a crescendo of passion and heartbreak.

But falling in love with a mortal goes against the rules, and Daniel and Vincent must unexpectedly team up to protect her from the wrath of Archangel Michael himself when Claire refuses to accept her destiny… and the terrifying truth about the child she is expecting. 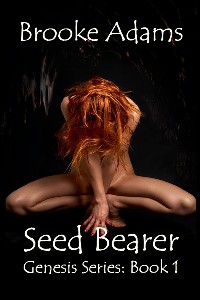 However, she suddenly realized that the skeletons, while being intact, were lying with their cervical vertebrae arched backwards in an unnatural position… as though their necks had been broken, she thought. But so many of them… what on Earth could’ve happened?

Just then she noticed a stone axe stuck in the ground to her left. Focusing more closely, she saw that it had separated the skull from one of the skeletons, which seemed different to the rest. It was lying with its arms crossed over its head as though trying to protect itself from a deadly threat. Its mouth was open in a silenced scream, petrified for all time. But something else drew her attention. She held the flashlight closer to its mouth. It can’t be. Unbelievably, she saw that it had unusually large and pointy incisors. Just like the jaw fragment, she thought. Realization suddenly dawned on her.

“A vampire? What makes you think that?”

“Look at this fang-like structure… what else could it be?”

“I have no idea. All I know is that this place gives me the creeps.”

“What’s wrong?” he asked, worriedly focusing the flashlight in her direction. He was starting to regret ever having brought her here.

“I just cut my finger on the fangs. Look at that, it’s bleeding.”

She held her finger up to him. Several tiny red drops fell on the skull at her feet before she instinctively sucked on the wound.

As they started backtracking, Claire suddenly noticed a narrow crevice in the wall about thirty feet to their right, barely wide enough for an adult to pass through.

“Daniel, can you wait a minute? I just want to check something out.”

Daniel followed her to the crevice in the wall. It was narrow but allowed the passage of an adult. There was another white arrow drawn at the entrance. Philip had gone in this direction. Claire looked at Daniel with an excited look on her face.

“Let me go in first,” he said, shrugging off his rucksack. Claire did the same. He took the lead and focused the flashlight in front of him.

After covering a short distance they reached a small, claustrophobic cave with a low ceiling. Part of the wall had collapsed inwards, reducing the space even more, but an entire panel of rock paintings had somehow remained intact. The excitement of discovery gradually gave way to incipient horror as she observed aghast what had suddenly become a macabre scene before her eyes. Her heart pounded wildly against her ribs as she mentally pieced together the massacre that had taken place here thousands of years ago.

Daniel backed up against the wall as far as possible to give Claire room to study the paintings, but she couldn’t avoid brushing him with her buttocks every time she crouched or bent over. His cock reacted immediately. He imagined himself putting his hands on her slim hips and pulling her against him… Stop it. He clenched his fists and shook himself mentally. This wasn’t the time or the place.

“Just give me another minute,” she pleaded.

Another minute? Daniel didn’t know if he’d be able to control himself for another second. Claire suddenly stood up and slipped on the wet ground, falling backwards into Daniel’s outstretched arms. She turned around and placed her hands on his chest, feeling the warmth of his skin and the taut muscles underneath the thin t-shirt. But that wasn’t the only thing she could feel.

Forcing herself not to look down, she couldn’t help but notice the bulge in his jeans straining against her stomach. Claire felt a warm rush of adrenaline and was thankful for the dim light. The startling sound of a falling rock in the main cave echoed deafeningly around them and brought her back to reality with a jolt. She quickly disentangled herself from his embrace and made a conscious effort to steady her hammering heart, clearing her throat before speaking.

For Now and Always
Jessica Coulter Smith
In Shelf
$2.99
Tweets by
sirenbookstrand