The Silliest Stories Out of Bustleburg

The Simpsons’ Springfield may be horrible, but here’s an invitation to explore a far more dreadful community.

Welcome to Bustleburg, a dying American metropolis where the mayor has stolen the last eleven elections and polluting vampire industrialists hope to blot out the sun.

The local televangelist takes credit for hurricanes through his prayer attacks, a media giant that never tells the truth just bought the TV station, and with the fire department on strike, blazes are everywhere.

Prominent citizens of Bustleburg include mafia don Boss Vostic, who buries his victims in the only part of town where trees are legal, ditzy social climber Mauve Mertz whose fashion fiasco might get her exiled, and Queen Zina, the mystical wife of the mayor and possibly the source of all the city’s woes.

You’ll never enjoy misery so much as your visit to Bustleburg. 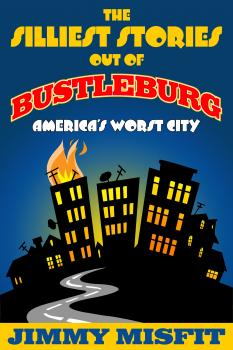 The Silliest Stories Out of Bustleburg

I'm not supposed to tell this story as it may incriminate me. However, my guilty conscience compels me to inform you I'm something of a killer. I promise you it was self-defense. Sort of. I was defending my house, anyway.

I blame it all on the City of Bustleburg, my home town. We lead the nation in bank robberies. Education is so poor, our achievement scores are in the single digits. There's neither a museum nor a sports team to speak of, and only one park, so there isn't anything for the kids to do. Except hone their skills as arsonists.

The real problem, however, is the woodpeckers.

Except for a small area of Burnsvale reserved for multi-millionaires, you have to move north of the Bustleburg Pike to the still-whoppingly-expensive High District if you want a yard with trees and decent schools. Either that, or you resign yourself to a commute so long it requires a couple pit stops and the crossing of at least one time zone. Believe me, I had to pay dearly for the cedar shake house at 35 Bluffwood. Moreover, as the High District is semi-autonomous, not only do we have trees, but we're also allowed birds.

"How nice," I remember saying when we moved in.

That sense of niceness ended about a year ago on a cool spring morning, a few minutes before dawn. As my wife Emily will tell you, I am an early riser. But I have nothing on woodpeckers.

"Go back to sleep, Dan. It's just a woodpecker or something," she said.

Right, just a woodpecker. It was probably confused and thought it had come across an extremely wide and flat tree. It would soon discover its error and leave.

However, the woodpecker must have been learning impaired. Every morning for several weeks, I woke to its loud, insistent hammering against our wall. Then Emily and I were out gardening on the south side of the house. We noticed small but alarming holes in the wall near our bedroom window.

"Oh my word," Emily said. "Did the woodpecker do that?"

"How in the world does the bird know we sleep in that room?" I asked.

My wife's thinking was clearer. "Repairs will cost a fortune," she said.

I called around for replacement cedar shakes. Then Emily phoned the Bustleburg Nature Society. They said the best way to get rid of woodpeckers was to have a bird of prey around. As it happened, we were fresh out of birds of prey at 35 Bluffwood. We ended up going to Gargantuan Mart to buy a fake one. I wanted a bald eagle since it's the most ferocious bird. However, Emily claimed local birds would more likely fear owls as there were no bald eagles in the vicinity.

"But the eagle represents the law and the American Way," I insisted. Emily doubted the woodpecker would appreciate the symbolism.

"That's not a very pretty decoration," said our neighbor to the south, Mrs. Fitzwallace, as we tied a plastic great horned owl to our rhododendron. "I bet if I dig around the garage, I can find something nicer."

We thanked Mrs. Fitzwallace but declined her offer.

The fake owl worked for five days. Then we heard the woodpecker return. Interesting. The bird couldn't tell the difference between a tree and a house, but it knew a real owl from a plastic one.

We moved the owl to a different location as if to say "Look! The owl moved, so it must be real!" The woodpecker figured us out. We upgraded to the plastic eagle. Less than a week later, the woodpecker started using the eagle as a perch to rest on when it was done assaulting the house.

The woodpecker grew bolder. We began seeing it hack away at the house during the middle of the day. It was a small woodpecker, actually. It had a black back flecked with white spots and a little round red head like a cherry tomato. No crest like the cartoon woodpecker from television. My son Bobby thought it was cute.

It had become beyond irritating to wake up daily at five in the morning and throw open the window to shoo off the thing, so we called the nature society back. Now they suggested stringing strips of tin foil around the house. That would surely scare the bird away.

"It certainly is an odd time of year to be decorating for Christmas," Mrs. Fitzwallace commented while I teetered on the ladder and pasted up Reynolds Wrap. "Can't you afford something better than that, Professor Teague? I think I have some nice garland in the attic."