The Sinful 7 of Delite, Texas 7: Her Double Delite Angels (MFM)

The Sinful 7 of Delite, Texas 7

Ava Donaldson is the last Dixie Chix to find true love. Just as she meets two amazing men, she finds out that she may have breast cancer. After suffering her own loss years ago, she now faces losing the new family of Dixie Chix and a possible relationship with two very sexy and complicated men.

Evan and Colton Banks have some scars of their own. They lost their mother to cancer, are estranged from their father, and only know life as military men. Then they meet Ava.

Ava soon realizes that Evan and Colton are like two special angels coming to her in a time when she needs true love most. Ava helps Evan and Colton to heal as she teaches them forgiveness and compassion when faced with a truth hidden by years of lies and misunderstanding. This final story emphasizes a different type of fear and suspense. It is a battle of Ava's inner struggles and proof that true love conquers all and that together the Dixie Chix can overcome the greatest battle of all…life.

The Sinful 7 of Delite, Texas 7: Her Double Delite Angels (MFM)

The Sinful 7 of Delite, Texas 7

I just loved Ava. She is so tough and is always there for all the other girl. She doesn't want to bother anyone when she goes through a new crisis. Ave so needs someone or two someones. She finds that in Evan and Colton. She finally finds love again and gets through her crisis with their help.

It is also great to see everyone at a BBQ at the end. Sure wish Dixie would write an update book on them all. Miss these characters and series.
JKM
JK Maxwell
Read more...

More From The Sinful 7 of Delite, Texas

The Sinful 7 of Delite, Texas 7: Her Double Delite Angels (MFM)
Dixie Lynn Dwyer
In Shelf
$5.50
All Books In Cart
All Books In Bookshelf
Excerpt

Ava Donaldson was determined to get a good run in today. She could feel her heart pounding and the blood pumping through her veins. She felt good, she felt alive and still filled with energy.

“Oh God!” Ava yelled as she lost her footing on the dirt running trail and nearly fell. As she dug her heels into the pebbled dirt and nearly hit the tree, she slammed directly into a wall of steel. Ava grunted as her body made contact with something, and she sprang back, looked over her shoulder, and knew when she hit the ground she was toast. Before her body made contact, strong, thick arms wrapped around her midsection and pulled her back up, making her head spin right before her face hit that wall of steel.

“Oh!” She gasped, realizing that she hadn’t hit a wall, but a man, and boy was he big and rock solid.

“I’m so sorry,” he stated in a deep, sexy tone that did a number to her insides. She gripped his arms of muscle until she was able to gain back her equilibrium.

Looking up and up, she locked gazes with one very good-looking man. He had green eyes, crew-cut hair, and wrinkles near his eyes probably caused by the sun and that terrifyingly intimidating look in his eyes. The tight T-shirt, camo shorts, and heavy breathing all turned her on when she should have panicked. She immediately stepped from his embrace and lowered the hat on her head more securely. Keeping her head low, her hair tucked under the cap, she figured the man wouldn’t recognize her from Dixie Chix.

“It’s okay. I’m fine and it’s not your fault really. I slipped on the incline. Thanks for stopping my fall. Have a good day.”

Ava rambled on as she tried to control her breathing. He had to be military. There was no doubt in her mind. Even now, his posture was military straight, his stance respectful and ready, with his hands behind his back, and his long legs showed off an ease, yet also appeared ready to bolt into an action stance. He eyed her, trying to see her face and her eyes. She quickly turned away and pulled the cap lower. She didn’t need some guy hitting on her in the middle of the damn woods. She wondered where he came from anyway. This was her spot to run. No one ever came around here, especially not at six o’clock in the morning.

“Wait. Are you okay? You could have been seriously hurt. What the hell is a young woman like you doing out in the woods alone? Don’t you know there are creeps out there?” He reprimanded her and suddenly he wasn’t so hot anymore. Now he was a chauvinistic jerk.

She placed her hands on her hips and stared up at him.

“Thanks for the advice, but this is my running path. Where the hell did you come from? No, wait, don’t answer that. Better yet, don’t come back here again. Find a new place to run.” She knew she sounded bitchy, but she was already in a cranky mood. Hence the reason for her jog this early.

“Damn,” was all he said as she began to run again, hoping that she’d never see that bossy jerk again. It was too bad because he was quite the eye candy.

As Ava continued to run, she wondered if perhaps she was a bit too bitchesque. It wasn’t his fault that he decided to run on her territory. It wasn’t his fault that she lost her footing and could have been seriously injured if not for his brute strength and quick reflexes. Then it hit her. She should have been thanking him instead of cursing him out.

What the hell was I thinking? He was very good looking. In great physical condition and mature looking. That was the kind of man she needed. Someone with experience and consideration for women.

She slowed her pace, feeling like maybe she should go back and find him. But how would that look? She didn’t know him. She had never seen him before. Ava knew she would have remembered him. She decided that if there were a next time, she would apologize or in the least be a lot more polite. Who was he anyway?

It was such an amazing feeling to be touched by two men at once. Two desirable, lethally handsome cowboys, who made her want things she thought she had given up on until meeting them.

She looked up into Colton’s green eyes and held his gaze.

“You make me want things, Ava. Things a man like me never thought he would desire.” He was so serious, and she felt Evan kiss along her neck and squeeze her a little snugger as Colton spoke. It was as if Colton’s words and feelings were reiterated by Evan’s touch. The moment and sensation was so strong, she felt her entire body tighten.

“Like what things?” she whispered in a shaky voice that told these men they had her full attention.

Evan caressed his palm along her belly.

“A woman as beautiful as you to come home to at night.”

She was shocked by his words. She knew hardly anything about them. What was he thinking?

He gently glided his thumb along her bottom lip as he remained holding her face between his hands.

“Don’t say anything. Please, Ava, this is so unlike me. I couldn’t sleep last night. I couldn’t stop thinking about you. That’s crazy.” He leaned closer and touched his lips to hers. He kissed her while Evan continued to kiss her neck as he moved her hair to the side. She felt his fingers graze along the underwire of her bra, but she couldn’t move. It felt so wonderful and so perfect to be caught in between each man. Colton’s kiss grew more urgent and needy as he swiped his tongue between her teeth and whisked along the inside, tasting her fully. She grabbed on to his forearms and kissed him back, allowing the moment to run its course. She felt free, alive, and desirable.

Then she felt Colton’s hard cock against her belly and Evan’s against her ass. Evan gently, slowly pressed his body firmer as he squeezed her tighter to him, and her hips had a mind of their own as they counterrocked against both men. She moaned into Colton’s mouth, and Colton lightly thrust his hips against her. Both men moaned and Colton pressed the palm of his hand down her hip to the hem of her shirt. She felt his warm hand against her ribs and she wanted more. She wanted to wrap herself around both Evan and Colton and get lost in a fantasy with them. No thoughts of cancer, of the past, and of death, just thoughts of the joy and deep sexual pull that continued to grow the farther his hands disappeared under her shirt. As Evan’s fingers moved down her belly and then brushed against her mound, she tightened her hold on Colton’s shoulders.

His lips moved off her mouth momentarily, but Evan’s continued to suck along her neck, keeping her aroused.

“I want to touch you. Open for me, Ava. Let me feel you,” Evan said, sounding breathless. She gave him her answer by kissing him harder as she grabbed Colton’s face and held him best she could at her shorter height.

She felt the masculine fingers undo the clasp of her jeans, push down the zipper, then press against her panties. She was glad she had worn her stretchy jeans. She sensed Colton’s fingers replace Evan’s as Evan gripped her hip and pulled her back against his chest. Then she released a sigh of relief as Colton’s fingers pressed her panties aside, and she parted her thighs, giving him room to explore.

His thumb brushed along her pussy. She was wet and aroused. Her pussy seemed swollen.

“That’s it, baby, let him feel you,” Evan said then kissed her neck and shoulder while he pressed his hips and cock against the seam of her ass.

Colton maneuvered two fingers up into her pussy, making her gasp and release his lips.

Her head fell back against Evan’s chest. He caught her as Colton slowly thrust two fingers in and out of her pussy. She felt Colton kiss and nibble on her chin and throat while he pumped his fingers, making her hungry for more. 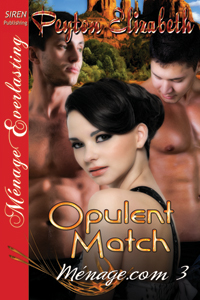 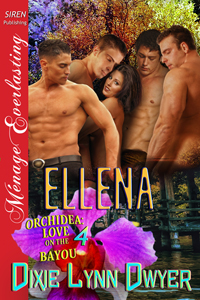