The Sky at Night (MM)

When Armand happens to look down into his new neighbour’s yard one night and discovers him lying on his back, staring up at the night sky, he doesn’t know what to think. It doesn’t happen every night, but it happens often enough for Armand’s curiosity to be piqued.

When they finally meet, Armand falls instantly in lust with Ben, a dentist with an interest Armand can only describe as out-of-the-ordinary. As they get to know each other, Armand’s feelings towards Ben blossom into love. Yet Ben reveals he has recently come out of a six-year relationship and isn’t quite ready for anyone special in his life. Armand is disappointed but learns to live with the fact he and Ben might only ever be friends.

But the future is a strange and wonderful thing. When Armand starts to show a fondness for Ben’s unusual interest, it leads to more than one surprise event. 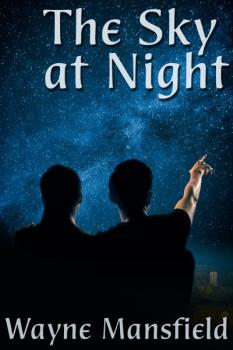 The Sky at Night (MM)

On Saturday morning, he did his weekly housework with vigour. Not only did he get it finished in record time, but he cleaned things he didn’t usually clean every week. Things like the inside of the windows, the skirting boards, and even the spaces behind and underneath furniture. It gave him something to do and took his mind of Ben’s return.

Armand was Skyping with his mother when he heard a car pull up next door. It was about three o’clock and even though he wasn’t going to rush next door like a lovesick teen, he bid good bye to his mother and turned the computer off.

His heart was going a mile a minute. He began to fidget, to look around for something to busy himself with. A little voice kept telling him he was being stupid, that it was a waste of time getting excited about someone who wasn’t interested in him in the same way he was interested in him. Yet it was beyond his control. He could no more suppress what he was feeling than fly.

An hour dragged by and there was still no word from Ben. Unable to wait any longer, he went outside to the garden hose, and began watering his front garden. He gave the garden a good soaking, allowing Ben plenty of time to make an appearance. But he didn’t. Undeterred, he walked around to the back of the house and watered the gardens there. And the lawn. And the orange tree.

That night, after dinner, after doing the dishes, Armand went upstairs to brush his teeth. While he was in the vicinity, he stalked across his bedroom to the window. Through a chink in the curtains, he looked down into Ben’s back yard and saw him, lying on his back, eyes, no doubt, skywards.

He pulled on some shoes, grabbed a towel, and returned downstairs. He left his front door unlocked and walked across the lawn to Ben’s place. Remembering the side gate was never locked, he opened it and went around the back.

“Hello,” he called out, announcing his presence. “Welcome home.”

He saw the shadowy figure of Ben sit up.

There was something in Ben’s voice that Armand didn’t like. A flatness.

He laid his towel beside Ben’s and made himself comfortable.

“How was your trip? The convention?”

“Good. Good,” said Ben. “Caught up with a couple of ex-colleagues. Learnt a lot. Brought back a tonne of reading.”

“Yeah. Yeah. Caught up with them.”

There was a pause in the conversation. Armand felt that perhaps he was intruding.

“Perhaps I should go,” he said, making to get up. “You’re probably tired. I didn’t think.”

Ben reached out and grabbed his wrist. “No. Don’t go.”

Armand lay down again. He didn’t speak for a few seconds. He was unsure what to say. Ben was obvious upset or worried about something, and he didn’t want to say the wrong thing.

“You don’t seem yourself,” he said, tentatively. “I thought maybe I was intruding.”

“Sorry about that. It’s not you. I’m just really tired.”

Ben paused, though Armand could tell there was more to come. He kept silent, allowing Ben the opportunity to say whatever it was he was going to.