When Bran meets Adam, he’s intrigued but wary of moving too fast with the brash younger man. Their first touch enthralls him, but he worries Adam will leave the way his last lover did.

From the moment Adam sees Bran, he knows the handsome soldier is what he wants, despite the older man’s resistance. He knows they have a connection, no matter how Bran protests.

But when everything gets thrown into chaos, Bran begins to see another side of Adam. The arrogant young man needs his help, and Bran starts to see there are lots of reasons he wants to give it… 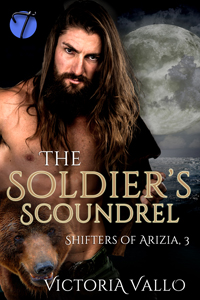 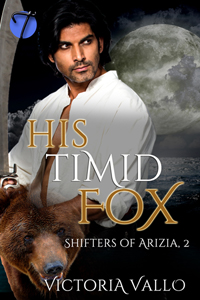 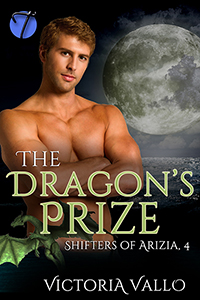 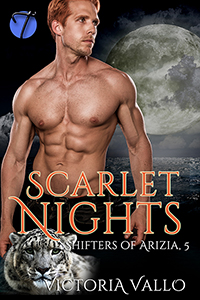 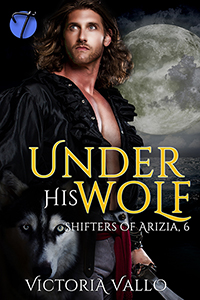 According to the priests of Arizia, the first shifters were once only beasts, not human at all.

Bran settled down under the oak tree, the only shade he could find so soon after noon. While he liked that Vane Godwin gave all of the guards and soldiers every third day off, Bran didn’t really know what to do with so much off time. He’d been a soldier since he was sixteen and had never wanted a different life. The possibility of marrying lingered in the back of his mind, but he didn’t like the idea of staying in one place. A year ago, he’d been certain he’d met someone he could build a life with, someone who would stay by his side no matter where his life took him. But Martin had cooled toward him when Bran had said he wouldn’t leave the military.

In the end, Martin had left Bran’s bed in the middle of the night, a crumpled and hastily scribbled note tossed on the table of the small room they’d been sharing.

Bran had considered joining the king’s army a few times so he’d have a more settled life, but he felt he’d be bored before long. The king’s men tended to stay close to the capital city and do their work from behind desks. Bran loved travel and meeting new people, and he couldn’t see himself giving it up. Serving the vanes and helping keep the peace locally suited him better. Many of the other men longed to see a war, but Bran didn’t crave that. A lot of the men in the troop he was in now were more old-fashioned, considering themselves warriors more so than soldiers. They wielded longer, heavier swords and rarely touched guns, even when they were available. Some of them were a bit too bloodthirsty for Bran’s taste, but they all seemed like honorable men.

Most importantly, he felt at home with them in a way he never had in his own childhood home.

Movement on the road caught his eye, and he turned to watch an approaching horse. The enormous black stallion looked even larger because of the small rider on his back. Bran wondered what a child was doing riding such a large horse, but as both drew closer, Bran noticed a sword at the rider’s belt. The rider carried himself well, and by the time he stopped a few feet away, Bran could see he wasn’t a child. He was a very beautiful man with big brown eyes. The man smiled down at Bran as he stood up and dusted his leathers off.

“Glad to see the landscape is a breathtaking as I was told,” the stranger said, not even trying to hide the way he was eyeing Bran.

Bran had taken younger lovers to his bed before, but they usually tired of him quickly because of his serious nature. “Yes, it is lovely here.”

The man sat up straighter on his horse. “Perhaps you could show me around Castile this evening. I’d love your company.”

Bran tried to keep his expression neutral as he nodded toward Castile. “I think you’ll find what you seek in the tavern.” After a moment, he added, “Try around back.”

The man laughed as he dismounted. For such a short man, he certainly didn’t seem to lack confidence. He swaggered over to Bran, not seeming at all bothered that Bran towered over him by more than a foot. “I wasn’t coming here for that.” He gazed up into Bran’s eyes, his lids lowered as he added, “Not until I saw you.”

Bran clasped his hands behind his back. “What are you here for? Perhaps I can help direct you.”

The younger man blinked, as if confused by Bran’s lack of interest. “I’m here to fetch one of my older brothers. He’s been serving time here for something. Stealing, I think.”

Adam smiled. “Indeed I am.”

“A pleasure.” He came closer. “And now we know each other’s names…” His hand slid over Bran’s crotch before Bran knew what was happening, while his other hand untucked Bran’s shirt. Eager fingers slid over Bran’s stomach as Adam smiled up at him and tilted his head for a kiss.

Bran backed up, begging his cock not to respond to the warmth and hunger of Adam’s touch. “How old are you? Viktor said you were younger than him and Garrick but wasn’t specific.”

Adam scowled at that. “I’m twenty-one. And yes, I’m short and small. And pretty. But I’m no child. I’ve been showing men like you how to fuck properly for years.”

Bran would’ve laughed if Adam hadn’t spoken with such confidence. Yet he saw a bit of uncertainty in the younger man’s eyes. Was it all bravado? Bran had known many men of shorter stature who behaved more aggressively as a defense. “Have you?” Bran asked, interested but not thinking it wise to act on his desire.

“Yes. And if you’re a good boy, we’ll continue what I tried to start.” He turned and walked back to his horse, mounting the saddle far more easily than Bran had imagined he’d be able to. “Very rude of you to turn me down, you know,” he added with a smirk before slowly licking his bottom lip.

“Rude, huh? Well, I like to know men better before I stick my cock in their mouths.”

Adam laughed. “Who said your cock was going in my mouth?” He urged his horse forward a few feet. “Would you like a ride back to the city? Beast can handle two men easily, like his master.”

Bran fought back images of Adam pinned between two brawny, muscular men. “I’m fine, thank you. It’s my day off so I came out to enjoy nature.”

“You’d have enjoyed it more with me on top of you.” He glanced up. “The clouds are quite pretty. They’d have made a gorgeous backdrop behind me.” He looked back at Bran and winked before clicking his tongue at his horse. “See you around, Bran.”

“Maybe,” Bran called to his back. He heard Adam laugh at that. I know shifters can be aggressive, but Viktor didn’t say anything about his brother being such a libertine. He frowned at that thought, feeling it was unfair. He and Martin had ended up in bed within an hour of meeting, and Bran had been convinced that was the beginnings of a lasting love. Who was he to judge anyone?

Once Adam was almost out of sight, Bran began walking back to Godwin’s estate, deciding to bypass the walk through the city of Castile by taking a backroad. He knew Adam would find plenty of willing men in the tavern, which would put an end to his interest in Bran. His body stirred a bit, a hint of jealousy washing over him at the thought of other men touching Adam and enjoying him. But, as much as he thought a fling might do him good, Bran had heard too many stories about Viktor’s family to get involved with one of them.

No matter how big and beautiful his brown eyes were.