Who built Stonehenge? Over four thousand years after it was built, Stonehenge continues to intrigue, attracting a million international visitors every year. Now ancient scrolls unearthed near Dublin reveal the secrets of Stonehenge and an archaeologist blogs about their meaning in this compelling e-novel. Based on known archaeological discoveries, The Stonehenge Scrolls spins a tale that could just possibly be true.

Myrddin, a kind of prehistoric engineer, supervises the hauling of giant stones that will be used to build a new monument at the Sacred Circle, an astronomical site long revered by the five clans in the territory. He also fathers a daughter, Sulis, born on the day the sun rises highest in the sky.

Her auspicious birthday foretells greatness, and Myrddin becomes smitten by the little girl with red hair, the sign of a Monument Builder. The precocious Sulis learns about the healing qualities of plants from her grandmother Ogwyn, the clan medicine woman, and cures the impetuous young chieftain Gwyr. But she has her own ideas when it comes to the Sacred Circle.

Is the oral history recorded in the scrolls plausible? In alternating chapters of The Stonehenge Scrolls, archaeologist Maeve Haley’s blog cites the evidence and speculates on the meaning of Stonehenge. 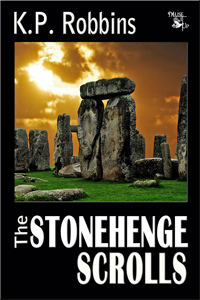 “A fine saga, The Stonehenge Scrolls is driven by drama and tight, involving writing and is a pick for any who enjoyed Auel's 'Earth's Children' series and similar historical novels.” --Midwest Book Review.

Author K.P. Robbins has studied stone circles, dolmens and cairns in England, Scotland, Wales, Brittany and Ireland. “The first time I saw Stonehenge, I was hooked,” she says. “In my travels I met many people also fascinated with Neolithic stone monuments. I hope The Stonehenge Scrolls not only appeals to them but also attracts new interest in Stonehenge.”

Why has this girl child bewitched me so?

I shouldn't have named her, for naming recognized my bond with her. But I didn't want her to have a harsh name like Ine, her mother, or Ogwyn, her grandmother, so I called her Sulis, a soft and pleasing sound.

Sulis. Maybe it's the name, maybe it's the child herself, but I am enchanted with every simple thing she does. Her first tentative steps, her baby babbling, how she tries to say my name—these ordinary actions seem amazing when she does them. Every time I see her, I marvel at how much she's changed and grown since my last visit. And then she wants me to hold her. I, Myrddin the Monument Builder, do not hold children, but when she cries and puts her arms out to me, tears—tears!—come to my eyes, and I must lift her up, if only to hide my emotion.

I am a man of learning. I know the sacred numbers and measurements of which these local simpletons are ignorant. I know where the sun will rise in the sky tomorrow and when the moon will be full again. I have made men do work they thought could not be done. Although I am a powerful man on these Plains, I am powerless to resist this beautiful child.

I have slept with many women, as I did with Ine, her mother, and I have always been careful to time my sexual adventures with the moon, to avoid getting the woman with child. Fatherhood is not fitting for those who have monuments to build. But the old witch Ogwyn, Ine's mother, knows the ways of plants. She must have given Ine something to make her particularly fertile around the time of the Even Day festival, when the village celebrated the end of the harvest. Or perhaps Ine put something in the festival mead to make my seed stronger. Maybe both. And so I became a father, and Ine died in the birth.

There's no doubt the child is mine. The local people all have dark hair. She has hair the reddish gold of the setting sun, the sign of a Monument Builder.

"You'll spoil that girl, Myrddin," Ogwyn said. "Not even the great Chief Yula can name the day of his birth. All I know about my own birth is that I was born sometime between the winter festival and the planting moon."

"Well, you weren't born on the longest day of the sun cycle," I replied. "That's certainly a day worth noting, the day with the most light and the least darkness."

What I didn't tell Ogwyn was that the day of Sulis' birth foretold great things for her. As a girl, she was a child of the moon, but her birth-day put her under the sun's special protection as well.

"Myrddin, did you bring me something?" Sulis asked.

"Yes, I have a surprise for your third birth-day," I answered, as Ogwyn rolled her eyes in disgust. "Whoever heard of a gift to remember a birth-day?" I heard her mutter.

I took Sulis outside, away from Ogwyn's disapproval, to receive her present. It was a dog of the kind found around Avlyn, with long legs and big feet, an intelligent looking face with a long snout, and short, wiry hair, both black and brown. We called them tomb dogs, because they were good at digging. Since I was often gone, I thought Sulis needed some companionship other than the old woman. I hoped the dog would keep rats and squirrels out of their hut, but looking at the jumping, whimpering puppy, I wondered if he would be of any use at all.

"Oh, he's so funny, Myrddin. He trips over his own big feet. And he must like me, because he's jumping into my lap. I'm going to call him Cwimgwily."

"Hey, I'm the Monument Builder. I do the naming around here."

"No, I'm calling him Cwimgwily. It's a silly name, and he's a silly puppy. I like the name. I can name things, too, Myrddin, because when I grow up, I'm going to build monuments like you do. Ogwyn says I have the hair of a Monument Builder."

Well, what else could I do? I was so proud she wanted to be like me, I let her call the dog what she wanted, and I didn't tell her that no women were Monument Builders.