Life's not easy when your mum's nuts, your uncle is becoming your aunt, and one of your crushes could -- and probably would -- break your face if he found out how you felt about him.

That's Tab's life, though, malevolent gods and all. His text-flirting with Demi, the brother of his best friend, is going nowhere: Demi already has a boyfriend and anyway, who dates their best friend's twin? But then, the pining after Nick is going nowhere either, because Nick probably likes gay-bashing on Friday nights for fun. He's gorgeous, but he's dangerous, and Tab knows better than that.

So what's a bit of harmless flirting, when one is taken and the other is straight? It's just a bit of fun.

That is until Demi is suddenly single, and Nick is not looking as straight and scary as he was before. 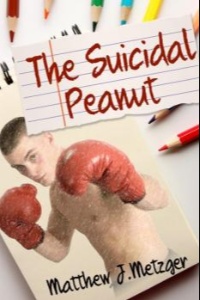 Tab just kept re-reading the text. He'd left the class sheet purposefully close to his elbow, and hopefully Nick would be early because he couldn't ask (about the portrait, not about a date, shut up) if there were loads of people, and if the gods could just leave him alone, just for five minutes, then ...

"What's up with you?" Uncle Eddie asked as he passed through the lobby, energy bar in hand. Tab shrugged, and carried on fidgeting. He needed a little luck right now -- no, maybe, like, a ton of luck, like a luck blessing, and regretted not having made some kind of sacrifice.

What did the God of Luck like as sacrifices anyway?

The door downstairs boomed, and Tab hissed in a deep breath. He'd heard no car engine, but Nick sometimes seemed to get the bus and sometimes got dropped off and Tab thought maybe he didn't drive, so maybe ...

Black boots clomped into view, and he clenched his fingers into the desk edge. "Hi," he squeaked.

"Alright?" Nick nodded, dropping his bag on the nearest chair and extracting a pen from his jacket pocket.

Just ask already! Dare you ;) x, said the phone, for the millionth time since Demi had actually texted him.

"Um, can I, um, ask you something?" Tab blurted out, and the paper clip he'd been fidgeting with made a pinging sound and flew away around the room.

"Sure, if you don't chuck more at me," Nick mumbled, scrawling his signature on the list.

"You have a load of those."

"Yes, but I have this particular one, as an assignment for portraiture ..."

"For what?" Nick screwed up his face.

"What, draw me like one of your French girls and all that?"

Tab flushed hotly to the roots of his hair, and adjusted his glasses. "No," he insisted. "Of you boxing. So I can draw the motion and speed and things. There's huge marks for those technical challenges, and the lighting on a person actually doing something is completely different, and ..."

"Um, well ...you come into the bagroom a few times, like you normally do, but ... I'd just sit in the corner and draw you. I'd need to do a load of practice sketches first, and then take some pictures to do some of it at college, but mostly it would be live."

"I said fine. It's not like nobody's never taken a picture of me before," Nick shrugged. "You do it around my schedule, though, man. I can't go juggling stuff about."

"And I want paying."

"Those peanut things you drew," Nick clarified. "They're right good, and you said you was into comics and shit, right?"

"So I want some of them. Baby sister loves that kinda stuff, and it's her birthday in a couple of months and I don't know what she'd want so yeah. You give me a handful of them peanut comics, and I'll be your French girl. Deal?"

Tab flushed a little at the repeated reference, but adjusted his glasses again nervously and nodded. Comics. He could do comics. More peanuts on pint glasses, no problem.

"Deal," he said, when he found his tongue again from where it had fallen down the back of his mouth and right into his stomach, and Nick held out a gloved hand. Tab stared, then shook himself, and shook the hand. Even with the black leather between their skin, Tab swore he could feel a spark. His stomach melted. His guts flooded down through his legs and pooled on the floor. He wanted to dissolve, right there, and it would be fine.

"I'm not doing no naked posing, though," Nick said.

Tab went purple, and Nick laughed. He had a hoarse sort of laugh, like he was parched, and maybe it would have sounded weird on somebody else, but to Tab it was like ...like ...like the best sound ever. There was no other way to say it. And fuck it if that didn't make him sound pathetic.

"I'm kidding, chill out," Nick said, smirking. "You're dead easy to fluster, you know that?"