The Sum of All

When a spell goes wrong and two witches find themselves stuck in a house with a plethora of paranormal creatures, tension rises and sparks ignite. A gauntlet is thrown down, a contest is born, rules are drawn up, and soon, the two women are living out the fantasies they’d never thought to have.

Who will be the best? Will jealousy prevail? Or, will they get their hearts snared by one or two of those Alpha males? 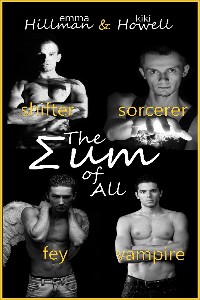 The Sum of All

“Another one? Mae!” Es huffed.

“Oops.” Mae eyed up the new man. He was a sure confirmation of what she’d done. In front of her stood a fair man, masculine but beautiful in every way. Her assessment was interrupted by Rafe’s teeth raking down the side of her neck and the shivers that started running up her spine. “Hey! No biting!” she finally remembered to say.

The vampire’s head drew back, and he stared at her nonplussed. “No biting?”

If she wouldn’t have had another visitor to contend with, she’d have laughed at his whiny voice. “No biting, baby. No blood spilled, etc. etc.. I am just not cleaning it off the carpet. Now,” She turned toward the blonde god standing in her doorway. “Welcome. What’s your name?”

The man’s eyebrow lifted. “My name is Devlin. I’m a Fey Prince, and I’m here in answer to your call. Where do you want to do this?”

“An impetuous and impassioned rite of sex, of course. That’s what you’ve called me for after all.”

“Impetuous?” her voice ended on a squeak. “Impassioned?”

“Rite of sex. Yes. So?” He stared back at her, his arms crossed over his chest. The toned forearms accented his six-pack abs. Ah, another shirtless man. So nice of them to come prepared. With his wings still extended and flowing gossamer feathers down to his jean-covered thighs, he looked more a modern god than just a mere prince.

“Back off. She is mine.” Rafe came to stand in front of Mae, the white of his eyes starting to turn red.

“Who says?” Devlin asked. He looked at the vampire like he would a new opponent and then with one shake of his head, clearly dismissed him. “So, where do you want to do this? I don’t have much time. I have to go back to my people.”

Mae tilted her head to the side so she could look at him from behind the vampire. His good looks were rugged, and yet, as crystal clear as his blue eyes. There was almost an aura about the man; too perfect if you asked her.

“Your people?” she repeated, the enormity of what she’d done finally getting through to her. She’d called all these creatures to her? What the hell had she done? She wondered a brief second as his wings receded inward.

She heard shuffling behind her and turned, only to find her friend trying to disentangle herself from the sudden attentions of the shifter. “Get off!”

“No.” He grabbed Es’s butt in both hands and drew her forward.

“So what?” He sniffed around her friend, his voice a growl once again. “I can smell your desire. Your scent doesn’t lie. You want this. You want me.”