Jared Montaine owns a big cat rescue in Florida and faces financial pressures, getting over his ex-wife, and the challenge of suburbia creeping ever closer to his enclave for the animals. But when a tornado wrecks part of the refuge, Jared's worst fear comes to life: his Siberian tiger, Sultan, escapes.

It's a big cat handler’s nightmare: a tiger on the loose, confused, lost -- and hungry.

Jared races against the police, the media, and the hysterical public, all of whom are clamoring for the tiger's hide. He must re-capture Sultan before the cat is killed -- by traffic, by SWAT, or by a civilian who just wants to shoot a tiger. With fellow wildlife handlers at his side, Jared fights desperately to find and capture Sultan before the tiger injures or kills a human. Because that would lead to his worst nightmare -- having to kill the tiger he hand-raised from a cub. Jared’s commitment is tested -- to his animals, his refuge, and his belief that saving the life of even one tiger is worth losing everything. 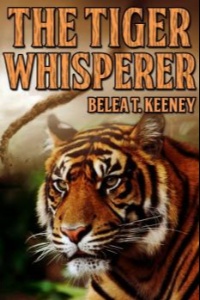 Tom regretted telling his wife to work that midnight shift last night. She had called from the hospital, and he was breezy, reassuring. “Oh yeah, I can handle little Aaron and get to the office myself. I’m a big boy.”

Riiiggghhhhtttt. He glanced at the clock, a silly gift from his sister. It had cats on it and it meowed on the hour. Nowhere near nine o’clock and Sheila’s arrival home.

“Aaron, please, a couple bites.” The cell phone slipped from his ear and Tom caught it before it hit the kitchen floor. He bent over and his tie plopped in Aaron’s cereal bowl. “Shit! No, not you, sorry. Wait a sec.” Tom tugged off his dirty tie and stood away from the high chair.

He had the sliding-glass doors open and the sunlight gleamed through the screen into the kitchen. The cool breeze felt wonderful, and Tom smelled the pungent marigolds in the small planter on the deck. He glanced at the backyard pool and wished he could just stay home, swim, watch baseball, and drink beer.

“Look, get the vendor on the phone and get them to walk you through the diagnostic. We can’t wait until office hours; those phone lines have to be up in thirty minutes. Okay, gotta go.” The microwave beeped and Tom snapped the door open. The odor of burned bacon filled the kitchen. Tom gulped down the bacon and grimaced at its taste. Aaron threw his cereal bowl on the floor.

“Okay, big guy, enough of that for you. At least get this down your gullet.” He tugged Aaron from the high chair, put him on the floor, and handed him some toast. Aaron chomped happily and Tom moved to the cabinet under the sink. Where were the paper towels?

Aaron bobbled around the breakfast table, splashing the milk and Fruit Loops. He kicked the plastic cereal bowl, sending it across the floor. He skidded, plopped on his diapered ass, and rose again, still cheery as two-year-olds could be while slipping and falling.

“Yes, hon, kitty cat.” Probably his neighbor’s Siamese, peeing in the coleus he had planted the week before. Thanks a lot. The paper towels eluded him; Tom moved to the laundry room closet, the phone still scrunched in his shoulder.

“Kitty cat! Kitty cat!” His son’s voice rose into that brain-squeezing toddler pitch that only small human beings can muster.

Tom turned from the closet and looked at his son. Aaron pointed gaily. “Kitty cat!”

A tiger stood outside the screen door.

Tom’s guts twisted in his belly, a sharp cramp of fear-pain.

The tiger peered in, only a screen between it and Aaron. Tom felt his heart rump-a-thump, like an old engine straining.

The tiger’s nose twitched -- as wide as his hand! -- and its golden eyes focused on the little boy. The animal was huge; its back was waist-high and Tom was over six feet tall himself. Its paws were caked with mud, and enormous. The tiger’s tail swung lazily behind him, batting against the palm trees Sheila had in planters, sending green leaves to the ground.

That was what convinced him it was real, that he wasn’t hallucinating. A figment of his imagination wouldn’t snap off the palm’s leaves like that.

LAN networks and systems and servers swooshed from his brain.

Should I move fast or slow?

Slow, he decided, get Aaron, and back away.

Tom clicked off the cell phone and slipped it into his pocket. The jangle of his car keys sounded loud, and in the quiet, he heard the tiger breathing, a thick sound. Aaron squealed and raised his arms.

The tiger’s whiskers snapped forward. It huffed and the screen door moved with the cat’s exhale.

Tom spoke softly. “Yes, I see the kitty cat. Be quiet, little guy, no more noise.” Tom realized he was experiencing tunnel vision; he could see nothing beyond the few feet around the tiger. The pool, the backyard, the kitchen were all a gray blur around the deadly orange and black. And he could smell it now; something rich and wild and none too clean.

Tom picked up Aaron, his movements slow and careful. He backed away, one, two, three steps. His shoes slipped a little in the spilled milk. If he fell ... But his reflexes were cold and fast this morning as the adrenaline pumped through his veins. He righted himself without thought, and tugged Aaron to his chest, the boy squirming.

Aaron kicked his little feet; his baby Reeboks smacked into Tom’s testicles but there was no pain. The tiger’s pupils dilated as he saw the child twist and turn and to Tom’s horror, it licked its furry mouth.

The tiger pressed his terrible face into the screen. Tom heard it rip, a purring sound that made his bowels clench, then the tiger stepped into his kitchen.

Tom backed away, step by step, eyes forward. The tiger’s stare didn’t waver. This wasn’t a meek housecat who shyly blinked away from eye contact; this was a predator who wanted Tom’s tasty little son for breakfast.