The Two and the Proud

Roger Michael Easton IV, better known as Rowdy, flouted the family's Naval tradition to enlist in the Marines—not as an officer, but a ground pounding grunt. He never expected to see as much combat or valor as he did in the field, but every engagement furthered his commitment to his brothers in arms. Now, with an early offer on the table to end his contract, Rowdy has to take a long look at the life he left behind, the life he's built, and the future he longs to have. Rowdy also wants a woman who gets him. Inactive Marine, Kim Wakefield, continues to serve her country as a Naval Criminal Investigator. She's hard on the grunts and sailors because she is one of them—and they didn't sign up for easy. Tired of the seedier side of military life—picking up drunk Marines, AWOL sailors, busting drug running operations, or worse, sending drug addicted servicemen to court marshal and treatment, she longs to have her faith in her fellow Marines restored. Kim wants a man who knows what she needs. Thrown together by chance on a 1Night Stand, the jarheads have a combustible chemistry—but do they have what it takes to give each other what they want?

The Two and the Proud

Not sure how those results could be a bad thing, he tapped the side of the shot glass. “Put the piece in the safe. They have the kind you can program here. I’ll keep my eye on the tequila.” He wouldn’t have tried to memorize her combination anyway, but he didn’t miss the minute relaxation around her eyes when he told her he’d watch the drinks.

True to his word, he kept his attention on the alcohol while she stowed the gun. When she leaned against the bar next to him, he pushed a shot glass over to her. “Let me preface this by saying I absolutely want to have sex…but I don’t want to be limited by the one-night stand.”

She hesitated in mid-reach for the glass and stared at it, not him. “Clarify?”

“I like you. You’re smart—which is both good and bad.”

“How can it be good and bad?” Her chin came up and she swung a hard gaze at him. Temper flared beneath the surface, bright as the lightning outside, enhancing the outrage in her eyes.

Gotcha. One little nudge to crack the cool façade and the passionate woman beneath glared at him. Yeah, that’s more like it. A second knock on the door interrupted and he let her think about it while he took the tray from room service and sent them away. He set the food on the luggage stand and ignored it for the moment.

Sprinkling salt onto the side of his hand, he said, “It’s good, because it’s sexy.” He bit into a lime, tossed back the tequila, and finished off the ritual with a quick lick of the salt. “It’s bad because you’re playing a game with me.” He poured another shot since the first had warmed his gut and loosened more of the tension. He’d barely added the salt to his wrist when she slammed back her own drink, caught his hand and stroked her tongue over his pulse point before gliding along the side of his hand to take the salt.

All the blood in his head rushed south and he let out a low whistle. “Damn.”

“Courage isn’t doing something because you know you can do it.” She moistened her lips and he couldn’t look away. “It’s doing what you’re not sure you can be successful at.”

Tell it to the Marine
Heather Long
In Shelf
$3.99

No Regrets, No Surrender
Heather Long
In Shelf
$3.99 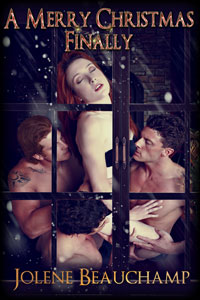 Marine in the Wind
Heather Long
In Shelf
$2.99

Marine with Benefits
Heather Long
In Shelf
$2.99
Tweets by
sirenbookstrand