Eiry, an icy fairy, had her wings savagely ripped from her leaving her almost powerless. Alone and powerless she is slated to become a sacrifice, but is saved at the last moment by Derian God of Lust and Pain. He makes Eiry his pleasure slave, teaching her in the ways of passion. Till Airyana, a creator Goddess, finds out and starts causing problems.

Will Derian be able to keep his wingless fairy? Or will Airyana take her from him? 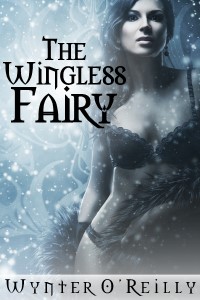 Derian stood before her his black eyes taking in every inch of her being. After a moment, he asked, "What are you?"

She swallowed the lump of fear in her throat. "I was an Ice Fairy

"Was? How did you lose your wings?"

He smiled and actually laughed. "My pets enjoy having fun at the expense of others."

Eiry's heart quickened it's already fast pace. His pets? The creatures had held her down and tortuously cut her beautiful wings from her. Leaving her this shell. Fear iced over into anger and rage.

Launching herself from the bed she attacked him with all she had. Still laughing he caught her, pinning her to him. Her small fists did nothing so she slapped him. The sound resonated throughout the room.

Derian let go of her suddenly and she stumbled falling to the floor. He'd stopped laughing but grinned down at her rubbing the cheek she'd slapped.

"So a fairy doesn't lose all their powers with their wings."

Eiry swallowed, trying to rid herself of the fear that had returned and balled in her throat. Something flashed in the Gods dark eyes that was gone before she could grasp what it was. Kneeling down he took her chin in his hand making her look at him.

"I'm going to teach you how to find pleasure in pain, my little wingless fairy."

Letting go of her chin, he scooped her up in his arms and gently laid her back on the bed. Slipping his hand under her robe he caressed one of her breasts. She gasped but didn't pull away.

"Let your lessons begin." He pinched her nipple applying pressure till she whimpered.