With his relationship on the rocks and a wicked winter storm keeping him from his destination, Shane wonders if his relationship with Vicky is in its final days. Can a holiday miracle save them?

Shane and Vicky had plans to meet their friends at a secluded little cabin for some winter skiing fun. After months of stress and fighting, Shane hopes a weekend away will do their relationship some good. He’d hoped for hot cocoa near a roaring fireplace and maybe some hot make up sex.

But after getting a late start, losing the GPS signal, and getting lost in a snow storm, all his hopes are dashed. Things between them are tenser than they’ve ever been, and soon they find themselves at the mercy of a hotel clerk with a very limited selection of available rooms. 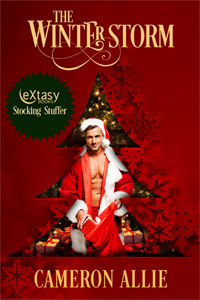 After driving in circles for over an hour and fifty-five minutes of listening to his fiancée bitch about how he had gotten them lost, Shane pulled into the nearest hotel parking lot. He’d barely taken the car out of gear before she hopped out, slamming the passenger side door in her wake. Hands flexing around the steering wheel, Shane closed his eyes and counted to ten in an attempt to get a grip on his anger. The last time he’d responded to her jabs about his bad sense of direction, it had turned into a screaming match followed by the silent treatment for ten minutes. If he hadn’t been so bothered by how he’d yelled at her, he would have been thrilled by the quiet.

He’d barely gotten to the number four before he heard a loud bang, as Vicky thumped the trunk in an aggressive demand that he pop it open. Gritting his teeth, he pulled the tab for the trunk and climbed out of the car. Vicky, with her luggage in hand, stomped across the parking lot toward the hotel’s front doors.

Hurrying, Shane grabbed his things from the trunk, and after locking up the vehicle he followed in her path, his feet crunching snow with each step.

The snow had been coming down steadily for hours. At one point during their trip they’d been stuck behind a snow plough. Barely going thirty, they’d wasted a lot of time on one small chunk of highway. They’d rented a lodge with a group of friends for a winter ski trip, and they should have arrived more than two hours ago. Vicky had gotten caught up at work, and already bickering, they’d been late leaving their home. Between that, the wicked snow storm, and the lost GPS signal, they’d gone from being late to being stranded.

Shane stopped in the doorway to brush the snow from his hair and shoulders.

White Christmas lights decorated the lobby. Garlands were wrapped around the railing of a nearby stairwell. In the breakfast area, fat Santa Claus dolls decorated the tables, and a big Christmas tree sat in the corner without any presents. Someone needed to tell the staff that Christmas had ended three days ago.

Already standing at the front desk, Vicky bellowed back at him, “Are you coming?”

Deliberately taking his time, Shane made a show of wiping his shoes on the mat. Even across the lobby he was sure he heard Vicky’s aggravated sigh. When he approached the counter, the clerk asked cheerfully, “How can I help you?”

“Someone,” Vicky said while glaring at Shane, “got us lost. So we don’t have a reservation.”

The clerk’s smile slipped, but only for a moment.

“Do you happen to have anything available on short notice?” Shane asked, trying to present a calm façade.

“Let me check.” The clerk typed into the computer, then scrolled down with the mouse. “There’s a conference going on. Between that and the unexpected snow storm, we’re pretty full.”

Beside Shane, Vicky sniffled. When he glanced over he realized she was close to tears. She didn’t bother to look at him, but her red-rimmed eyes and the lost look on her face made him want to hold her. He knew that wouldn’t go over well—it’d be like trying to hug a porcupine. She might be saddened by their predicament, but she was still pissed at him. Instead, he prayed that their luck would turn around.

“We have a few single rooms left.”

Shane hung his head. Since they’d moved in together six months earlier, it seemed all they did was fight. He really didn’t want to be separated from her. He’d rather she stew and fuss near him so he knew what to expect come the morning.

He chanced a peek at her and just knew she was considering taking the singles. Stopping her from accepting, Shane quickly asked, “Are you sure there isn’t anything else?”

With a loud humph, Vicky crossed her arms over her chest and leaned a hip against the counter.

“Actually…” the clerk announced, “I have one of our king suites available. It comes with Netflix access, an electric fire place, king bed, and a Jacuzzi tub.”

“How much is that?” Shane asked, fearing the answer.

“Four-hundred and ninety-nine. A night.”

With clenched teeth he looked over at Vicky. Between the engagement ring and the new mortgage payments, they’d already been stretching the budget pretty thin by going on the ski trip. It would probably be cheaper to rent two of the small rooms. Maybe he could convince Vicky to share a single bed with him. One night on a tiny mattress shouldn’t be so bad, but considering they hadn’t had sex in months, and taking into account their current fight, she might not even want him close enough to touch.

“However,” the clerk continued, drawing their attention back to him. “It’s nearly midnight now, I can’t imagine we’ll be renting the room out tonight. I could give it to you for one-hundred and fifty.”
Shane perked up. “Seriously?”

“You won’t get in trouble for that?” Vicky wondered, while playing with a candy cane that was sticking out of a little red bucket next to the clerk’s monitor.

The mouse began clicking again and the clerk smiled. “Benefits of being management. I get to make executive decisions, to a point.” He winked at Vicky, then glanced back at Shane. “I’ll just need a credit card.”

As Shane slid his card across the desktop, he made note of the clerk’s name. The nametag read Owen. Surprised by the man’s kindness, Shane started to wonder if maybe he really could turn this night around. “See, Vicky? It all worked out.”

Big mistake. As soon as the words were out of his mouth he regretted them.

Leaving her slouched position against the counter she leaned toward him and groused, “I’m not the one who got us lost.” 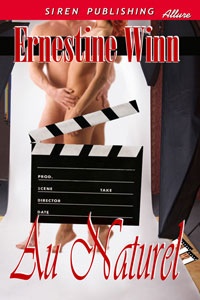 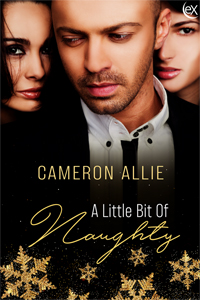 A Little Bit of Naughty
Cameron Allie
In Shelf
$1.99
Tweets by
sirenbookstrand