The Witch and the Alien

When a witch and an alien join forces, will they be powerful enough to save the world?

Petal has spent her entire life hiding the fact that she's a witch. Now she fears her life is destroyed, because in a moment of rage, she unleashed her power and revealed her secret. If things weren't bad enough already, they get even worse when some kind of otherworldly beast suddenly appears in her backyard, followed by the arrival of an angry mob looking for the witch. Adding to the chaos, a tall, sexy man shows up, whisking her away in the nick of time.

Though Rein thinks Petal should be grateful to him for saving her, she feels nothing but distrust and anger toward her savior. He's an intergalactic space monster hunter, and now she's stuck on another planet while he completes the next task on his to-do list. Unfortunately, she's also feeling some uncomfortable and totally inappropriate thoughts of desire for the man.

When Earth is threatened by invaders, Petal must put her faith in the mysterious alien and return to the place she was scorned. She must battle the invaders, and her growing feelings for Rein, hoping her powers are strong enough to save the world. When it comes down to a choice between Earth and Rein, she can only hope she's brave enough to make the right decision.

The Witch and the Alien

Before my eyes I watched the wild beast transform. Its physical attributes remained unchanged, the character, however, visibly shifted. The snarling mouth closed, and the clawed limbs dropped down to its furry sides. The massive head lowered submissively, and it sat back on its haunches. The long, thin tail I'd failed to notice earlier actually swayed back and forth across the grass.

The giant lowered the sword and stared at me, his mouth hanging open slightly. "What the hell?" he finally said.

I shrugged, dropped the dirt, and brushed off my hands. "A spell to subdue the wild," I explained. "What is this thing?"

"A Kedago. Deadlier than anything you'd find here."

The drilling look I got made me shiver. "As in this planet."

He reached out suddenly and pushed me out of the way, forcibly enough to send me sprawling. By the time I got to my feet he'd swung the sword in a great arc and brought it down to cut off the beast's head.

"Holy shit, you son of a bitch." I couldn't believe it. As I stared in dismay at the carnage before me, the thing began to disintegrate. It took about a full minute, but soon it was completely gone. I spun on the giant. "Why? You didn't have to do that."

"How long did you think you could hold it? Even if you could manage the beast, what would you do with it? Keep it?"

True, I'd always wanted a pet, but I was thinking more along the lines of a cat—black, of course.

The giant gestured over his shoulder in the direction of the road. "Besides, I think you have enough to worry about right now."

I'd been so caught up in the beast drama that I'd failed to hear what sounded like a minicaravan coming down the dirt road toward my house. I was far off the beaten path and not many cars came down this way. They must be coming for me. I suddenly pictured an old-fashioned witch burning.

"Damn." I glared at the giant and turned to bolt for the house.

Taking the stairs two at a time, I rushed through the door and strode into my room. My suitcase was in the closet. I yanked it down and tossed it open on the bed. Grabbing an armload of hanging clothes, I dumped them in the case and bent down to snatch up several pairs of shoes, cursing myself all the while. I had intended to pack up and be off first thing this morning.

I heard my front door bang shut and held my breath until the giant poked his head into my room. "Get out," I told him.

"I would think you'd want my help."

"I don't want anything from you." I didn't want to even try and contemplate what had just taken place and all the implications it entailed.

I turned my attention back to my packing. I tossed a bunch of stuff into a toiletry bag and began pulling out drawers of my dresser. There was so much I needed to take, and I wasn't sure if I'd get the chance to sneak back and get the rest.

"Easy for you to say. I need this stuff. I can't just leave with nothing." I shoved some socks and panties, along with the toiletry bag, into the suitcase, flipped over the top, and held it down with one hand while I zipped it up with the other.

"They're here." The giant had moved across the room to look out the window that faced the front of the house.

"Damn it." I joined him and saw four cars move down the driveway and block in my car, not bothering to mind the grass.

"What exactly did you do?"

I shrugged. "Had a little meltdown at school yesterday. In front of witnesses."

The giant whistled low. "Got a back door?"

He gripped his sword in one hand and took my suitcase with the other. I had no choice but to rush with him through the house and outside. Then we were barreling toward the woods, the sounds of an angry mob clamoring for my blood behind us. 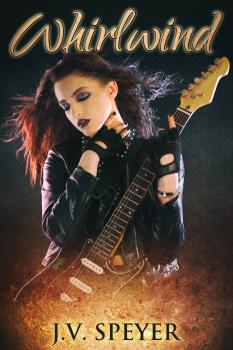