Though his mother named him after a priest, there's nothing saintly about McGauran O'Dowd. He needs to escape the slums before he's forced into marrying his friend’s sister and revealing the sin he's managed to hide so far.

When McGauran gets hired as a logger by ruthless business man Gédéon Latendresse, people warn him --the Latendresse family is cursed. Twenty years ago, Gédéon rode the witchin' canoe from the camps to the city to stop his brother's wedding. But that night, Gédéon broke one of the Chasse Galerie rules, and now the Devil's come for his due.

And that due, McGauran soon finds out, is Gédéon's sheltered young nephew Honoré, the most enchanting man McGauran’s ever met. The lover he's been praying for.

Cursed, Honoré is slipping into madness and threatened to be interned. When the winter comes, McGauran is stuck at the shanties, helpless to save Honoré from his tragic fate. He’ll do anything to save the man he loves, even bargain with the Devil himself. 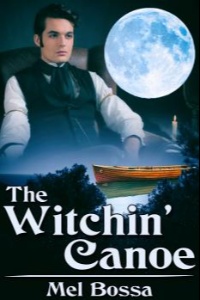 McGauran moves into his arms and rests his head over his heart. “It can't be a sin if it feels this good.”

“Oh, but I think that's the very definition of sinning,” Honoré says in jest, without thinking.

“I wish you'd read that Darwin book I told you about. Evolution. Transmutation of species. Science. That's where men should be turning for answers. Not the Church.”

When McGauran is silent, Honoré regrets his words.

“It's not like a gobble up everything the bible,” McGauran finally says, defensively.

McGauran glances up at him, his eyes turning gentle. “You're scared, aren't you? Because believing in God, would mean believing in everything else. Including the Devil.”

“Stop.” He wraps McGauran's arm around his shoulder. “Don't talk about it. Don't.” He's learned to ignore it. To drown out its evil presence with joy and laughter and music. Always music. “I don’t want to have an episode. I haven't had one since you've moved into the house.”

“Because you're here.” Honoré touches McGauran's face. “And the lights -- have you noticed?”

“Yeah ... I noticed.” McGauran leans over him, gazing down into his eyes. “Listen to me. I'll never let it hurt you. Whatever it is. I'll sell it my soul, if I have to.”

“Don’t you understand? I had nothing, I was nothing, before you looked at me.”

“That's not true, Gaury! You keep referring to yourself as a poor jobber, or a loafer, but you're none of those things.”

Honoré raises himself up on the pillows, leaning back on his elbows to give McGauran a direct look. “You're a king, McGauran. That's what you are. I knew it the moment I saw you.”

“Right ...” McGauran falls back against the pillows and rolls his eyes.

“Stop it.” He chuckles, pinching McGauran's chest. “You are. All you need is your own kingdom, that's all. I see a cabin... a lake. Land. Yours.”

With intense eyes, McGauran studies his face. A confession seems to be forming on his lips, but he doesn't speak.

“Tell me,” Honoré ventures, too curious to stop himself, “are you more like your father or your mother? Because you never speak of him.”

McGauran looks away at the window. “I'm a lot like him, I guess.” He turns his eyes to him again. “He was always -- he was always trying to better our lives. He worked so hard. Too hard. And he just ... he just wore himself out. He died coughing blood.”

“That won't happen to you,” Honoré says, almost panicked and grabbing McGauran's hand. “I won't let it happen. I'll inherit. I'll lift that curse for you.”

At the sound of those words, McGauran's eyes fill with tears and he takes hold of Honoré's face. “I have to tell you something.”

“Wait. Listen.” Someone is running down the hallway and Honoré sits up. “What was that?” Maggie is whimpering somewhere near his room. “It's Maggie.” He tosses the blankets off.

“No, stay here.” McGauran jumps out of bed and into his breeches. He frowns, looking at the door. Nearby, Maggie is mumbling words. He cracks the door open and peers into the hall.

Honoré throws his black silk house coat over his naked body and ties it at the waist. He steps closer and looks over McGauran's bare shoulder. He starts. “What's hap --”

But she takes off, running down the hall, her long orange hair swaying, her pale blue nightgown flowing behind her. Her light and quick steps are heard in the distance.

For a moment, Honoré can't move or speak. Shocked, he stares at the long empty hall. “You saw her, too, yes?”

McGauran crosses himself and leans his head back against the wall. “Her face ...”