The Wranglers of Bear Mountain 2

The Wranglers of Bear Mountain 2

Heat Rating: Sextreme
Word Count: 61,827
10 Ratings (3.7)
Contemporary Menage a Trois/Quatre Western/Cowboys
In Bookshelf
In Cart
In Wish List
Available formats
ePub
HTML
PDF
Mobi
Cover Art by Les Byerley
Reviews
Great story with good characters
Jlg29
I really liked this book a lot. You could really feel how scared Shelby was throughout the book and I love the fact that Dalton and Bo weren't perfect and had to come to terms with things in their lives before they could agree on sharing Shelby. A very well written book and I look forward to the next book in this series!
rhondavb
Read more...

More From The Wranglers of Bear Mountain

Love and the Two Wranglers (MFM)
Marla Monroe
In Shelf
$4.50
All Books In Cart
All Books In Bookshelf
Excerpt

Dalton Crazy Bear shook his head at Bo, “Enkoodabaoo” Cotu, his best friend. Sometimes the other man drove him crazier than his name. Why couldn’t he move on and stop living in the past? He didn’t deserve the kind of life he lived. It wasn’t his fault, none of it had been, but the damn Indian continued to punish himself as if it were.

“Well, I’m tired of spending every night we get off doing nothing but talking to the damn horses and my hand is tired of all the quality time we’ve had of late. I’m going to town.” He pulled off his hat and wiped his sweaty forehead with the back of one arm.

“I don’t understand why you stick around in the first place. I’ve told you to stay away. It’s not my fault your love life consists of your hand and a bottle of hand lotion. You’re not my keeper, and I’m not your partner. Go.” Bo waved him away before continuing to whittle on some wood.

Dalton sighed. “What are you making this time?” he asked, deciding it wouldn’t hurt him to sit for a while before taking a shower.

“Don’t know yet. The wood hasn’t told me what it is yet.”

“The eagle you gave the twins’ father was amazing. You really should sell your work instead of giving it away,” he said.

“I thought you were going to town,” Bo said without looking up.

“I am. Just cooling off before I shower. You know, as many of those things as you have in your room, you could have a showing in town and get rich, off of ’um,” he said, trying again.

Bo just grunted this time. Dalton gave up and stood, brushing off the dust from the back of his jeans before unstringing his chaps. They needed a good beating before he took them inside. They were covered in dust after the last ride. Once he had them off, he threw them over the metal line they had strung across one side of the porch for that reason and proceeded to beat them lightly with a small broom.

The dust flew out toward the trees instead of back on them as it was intended to, but for once, he wouldn’t have minded one bit if it had drifted back toward the porch and covered his friend in it. With one last whack, Dalton set the broom down and pulled his marginally cleaner chaps off the wire to carry inside with him.

“I won’t.” Dalton gave the other man the finger behind his back before toeing the worn boots off and setting them upside down over the boot rack to keep anything from crawling into them during the night.

“Back at you, D,” Bo said without looking up.

How in the hell did he always seem to know what Bo did behind his back? The man had to have some shaman inside of him somewhere. He always seemed to know about something beforehand. Dalton could never manage to pull anything off around him.

They’d grown up together as young bucks despite there being two years’ difference in their ages. Back then, there were so few children living in the area, that if you were anywhere close to age, you hung out together. To seal the deal, Bo’s grandmother had treated Dalton like her own, always feeding him and making sure his clothes were mended. His own mother was a drunk and rarely noticed if he was around or not unless she wanted him to do something for her.

No one treated him any differently since almost everyone in their community had drunks or gamblers in their families. It was a sad family tradition that few were able to break. He’d done it by enlisting into the marines after Bo had. Bo had been injured and ended up stateside near the end of his first tour while Dalton had remained in until everything went to hell. He should have said something to his friend before he’d shipped out that last time, but hadn’t had the guts to bring it up. Instead, he’d pushed it to the back of his mind and fled like the coward he’d been and told himself he’d do it the next time he was home. Only he’d never gotten the chance and later, when he had finally gotten out, Bo was gone.

The hot water did wonders to soothe his aching muscles and the added soap cleaned his body up just fine, but nothing could soothe his miserable soul or clear the guilt he felt over his failure to talk to Bo before he’d left that summer. Now they were at odds with each other, loosely connected as only blood brothers could be when one of them no longer cared. He could sever their connections and go on with his life, leaving Bo to drift, but that just wasn’t right and he missed his best friend and brother by choice. If there was some way he could ease Bo’s torment, Dalton was going to keep trying.

He didn’t want to leave his friend alone, but he needed to get away for a while. Enkoodabaoo, one who lives alone, described Bo to the hilt. Only he hadn’t allowed his friend to do that for the last seven years. It had taken him a while to locate him after his tour of duty had been up, but once he had, Dalton hadn’t left him alone again. If anyone had a right to wallow in misery, it was Dalton, not Bo. It had been Dalton’s wife who’d committed suicide, not Bo’s, though his friend had loved her as well.

She couldn’t remember the last time she’d gotten all hot and bothered like this. It had started with just a look at Bo’s squeezable ass. Could it be that her libido was finally coming back online after all these years? At her age, Shelby figured she was wishing for a miracle when she wished to just feel something for a man, any man, just so she knew she wasn’t a dried-up old hag at the age of thirty. Well, it looked like she’d finally gotten her answer. She wasn’t dried up, but neither was she dating material either.

Shelby shoved aside all the crap in her life and concentrated on Bo and the way he’d gotten her hot and wet. She needed to hold on to that feeling. As she removed her clothes, the scent of her own arousal greeted her. She had no doubt Bo had smelled her earlier. A groan at that thought changed into a moan as she slipped her fingers through her wet pussy lips and drew a light circle around her clit.

“Yes!” she hissed out. It had been so long since she’d felt any sort of arousal at all, much less one as powerful as this.

Closing her eyes, Shelby thought about Bo’s dark eyes and the way he focused his entire attention on the person he was listening to. It sent chills down her spine even now. She wanted to unbraid his hair and run her hands through it as he kissed his way down her neck to her breasts.

One hand came up to tweak a nipple, tugging on it as she imagined his mouth fastening to the tight bud and sucking. His other hand would squeeze the opposite breast, cupping and molding it to his liking. She could imagine sharp teeth biting lightly before he sucked gently then moved to the other breast.

Shelby’s pussy contracted, grabbing at nothing as she continued to stroke lightly across her aching clit. The two fingers she shoved inside did little to ease the need building inside of her. She needed cock, thick, hard, hot cock to ease the need. She didn’t have that and wouldn’t be getting any for a long time. It was why she had her trusty vibrators, but today, she just couldn’t bring herself to defile the momentous occasion of a true natural arousal by riding out an orgasm with a fake dick.

She slid her fingers in and out of her cunt, wishing she had longer fingers to reach her own g-spot, but that wasn’t happening. Instead, she returned to teasing her hard little clit with her fingers as she continued to pinch and pull at her nipples.

“Please. I need to come so bad. Please, Bo. Don’t leave me like this.”

Shelby squeezed her eyes shut against the stark reality that she was alone in her room and pictured Bo there next to her. It was his fingers torturing her breasts and his fingers playing in her juices. She could almost feel it when he nipped and licked all along the underside of her breast and down her abdomen to lay brief kisses along her pelvis.

When he moved her fingers aside, and replaced them with his mouth, Shelby did call out his name. His hot, wet tongue licked along her pussy lips then lapped at her slit like a kitten finding cream. Every muscle in her body tightened as she slowly began ascending to her desperate goal of pleasure. Each swipe of his tongue near her clit drew out a moan from her lips. Each hum of approval vibrated against her pussy, adding to her burning flame of need.

When a second mouth encircled one nipple and fingers plucked at the other one, Shelby knew it was Dalton adding to her pleasure. Where one went, the other followed. 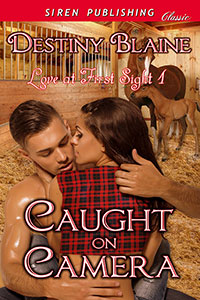 Love and the Two Wranglers (MFM)
Marla Monroe
In Shelf
$4.50