Even a decade after the Civil War, the evil deeds carried out in the Border War for "Bloody" Kansas are not forgotten. Hate and revenge still rule the hearts of some, while others wish only to forget and disappear.

In the beginning, Boy Smyth has a dull Missouri farm life and a burning desire to be an outlaw like his hero, Cole Younger.

In the end, Boy Smyth has five dead bodies and two burning buildings at his farm and the most feared man in the United States crying outside his front gate.

And that desire for the outlaw life? It's purged completely from his system. 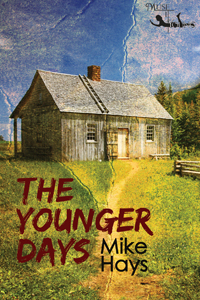 Off in the distance, on the edge of a rise, two dark figures rode rapidly toward the house. I just about jumped out of my skin, but Pa only looked up for a second and returned his focus to the piece of wood in his hand. I was sure these fellas had to be detectives from the Pinkerton Detective Agency. They were probably out hunting down the Youngers after the train robbery.

As the riders came closer, I became more and more concerned. "Pa, want me to get your Sharps rifle?"

Pa did not look the least bit worried. "No, son, that won't be necessary."

What! Not necessary! The enemy was riding in, and he says “not necessary”! Sometimes I wondered about Pa. I wondered if Pa even had an ounce of Missouri rebel left in him, or if he had gone plain yellow, like Maddox says. Pa stayed in his chair as the riders approached full bore out of the pasture and leapt over the split rail fence not fifty yards off the porch. They stopped right outside the arc of light given off by the lantern. Their horses looked tired. The two shadows appeared exhausted but still had a dark and sinister look.

One rider was tall and sat high in the saddle. He wore a long duster with a hat pulled low over his face. As the horse jittered back and forth, a Sharps rifle, holstered below the saddle and Colt pistols around the tall rider’s waist reflected the light of the lantern and caught my eye. The second rider sat motionless, hunched over in his saddle. He looked either dead or asleep, but I’d never seen nobody ride that fast or that hard asleep. There was one thing for sure: these weren't ordinary, everyday travelers. These two had to be Pinkerton detectives. I looked nervously to Pa, who sat calm and whittled on the stick!

The tall one spoke, "Evening, sir." He had a worn, rough tone to his voice. "Word is that you may have lodgings and a meal for a couple of weary Texans traveling back from dealings in Kansas City?"

Texans? That was a flat outright lie. Did this guy think we were stupid? Surely, Pa will get the gun now and chase these rascals off. But Pa answered, "I reckon we have some space for y'all in the barn, if that will suit you. My wife could probably scrape up some food, too."

"You know, we've had rain here lately, and the creek’s running. I imagine if a man were to water his horse about half mile downstream and walk her back upstream to the barn so as not to leave a trail, we'd have some supper ready when he gets here," Pa said to the stranger.

I was so mad I could just about jump out of my skin. What in the world was Pa talking about? There's a spot just fifty yards down the path where they could water their horses and just keep riding. The tall one cracked a shy smile, thanked Pa for the advice, and the two riders trotted away. Pa went inside to talk to Ma for several minutes while I sat on the porch rail fuming mad. He returned to the porch carrying a stack of blankets and another lantern.

"Come on, son; we got work to do. Pump me a couple buckets of water and meet me in the barn."

I got up and followed him toward the water pump. I answered him. "Why's that, Pa? You aren't really gonna let them fellas stay here?"

"Yes, son, and hurry a bit. They’ll be coming back soon, and one of them is hurt badly."

That was more than I could take. My temper had seen enough for one day. I fidgeted as I filled the water buckets. I couldn't believe Pa had gotten so soft he'd be hospitable to any Pinkerton detective or Red Legger. Finally, as Pa approached the barn door, I exploded. "Not them Pinkertons, Pa! I ain't doing anything to help them stinking Yankees!"

Pa stopped dead in his tracks. I thought I was dead. Never had I talked back to Pa like that before. But as Pa turned around, a grin began from the corners of his mouth. "What in Jesus' name are you talking about, Boy?"

"Those Pinkertons that was just here, Pa. You ain’t gonna let them stay here, are you? You know they are just hunting down the Youngers and the James."

At that moment, Pa broke into the first real, all out belly laugh I had ever heard come out of him. He laughed so hard he nearly dropped the stack of blankets from his arms.

"That's precious, Boy!" he said, still chuckling, "Those boys ain't Pinkertons, son... Those two are the Youngers, Cole and Jim Younger, from Jackson County, Missouri. And seeing as Cole is a childhood friend of mine, I reckon we will put them up for a spell, no matter what you have to say about it. Besides, Cole is always welcome at my home. I owe him that much."

The buckets of water both hit the ground about the same time as my jaw. I stared at Pa, wide eyed. Water splashed and soaked my pants. "Whaa...?" I tried to spit out some word, but nothing came out.

Pa, still laughing, said, "As soon as you get them two buckets filled, meet me in the barn." He turned, shook his head, and walked to the barn.