Five friends, one basket of sex toys. How to win it? By telling the sexiest story.

Ellie Kirkwood takes a job as publicist at a renovated hotel in Spirit, Colorado. She’s peeved to find that Josh Cooper, the guy who broke her best friend’s heart, owns the place. Still, she needs this job so she’ll just have to get over herself.

Josh’s partner, Rex Moore, maintains that Josh wasn’t responsible for the breakup with Annabel, but Ellie knows better. She puts her animosity to one side as she works to publicize the hotel. Josh and Rex are real hunks. Perhaps a charity auction with the two of them as the star prize?

Note: The books in this series share an external story arc. Though not mandatory, we highly recommend reading the books in sequential order.

All 5 Spirit, Colorado books must be purchased in the same transaction in order to receive the 20% discount. Books purchased individually do not qualify for this discount.

“Ellie?” Josh half rose from his chair. “What the—”

“You,” she said accusingly at the same time, barely able to believe her eyes.

Ellie stepped into the room, her insides churning with anger as she gazed into the eyes of the man who had unceremoniously dumped her best friend, almost at the altar, and disappeared into the sunset.

“Am I missing something?” the other man in the room asked, his words cutting through the electric atmosphere. Ellie and Josh ignored him and continued to glare at one another. “Excuse me, earth to Josh. What the hell’s going on? I take it you two know one another.”

“You could say that,” Josh responded curtly.

“I’ve obviously made a mistake.” Ellie turned toward the door. “I can’t work with you.”

“You have no choice,” Josh said. “You already signed the contract.”

Ellie tossed her hair and treated him to a belligerent glare. “Only because I had no idea you were behind this scheme. How was I supposed to know that you grew up in Spirit?”

“Glad to know the gossip machine continues to thrive,” he said caustically.

“It doesn’t matter where I heard that. All that counts is that you and I can’t work together. Frankly, I’m surprised you’d even want to.”

“Sometimes I surprise myself. Rise above your personal feelings, sweetheart, and be professional. There’s no time to find anyone else.”

“I’m not your sweetheart, thank God. Show me some respect, if you even know the meaning of the word.”

Another heavy silence descended as Ellie and Josh glared at one another, neither willing to look away first. Even though Ellie hated him for what he’d done to Annabel, she couldn’t deny his attractiveness. Over six feet of hard, taut muscle and the powerful aura of a man who was used to getting what he wanted out of life. Yeah, Ellie completely got what Annabel had seen in him. She’d only met him a couple of times when she’d gone to visit Annabel in New York, but she’d never forgotten him. He wasn’t the sort of guy any woman could forget easily, which made it hard for her to accept that he’d treated her college roommate so shabbily. She’d had him pegged as a man of principle. He’d grown up with nothing and had made a success of himself in a very short space of time, driven by ambition and an obvious need to prove himself. Shame he hadn’t learned how to treat people right along the way. Still, wasn’t ruthless disregard for the feelings of others the hallmark of a natural entrepreneur?

He continued to glare at her, an ironic half smile flirting with his lips, as though he found her dilemma amusing. Instead of thinking about her next move, she registered his thick, dirty-blond hair, a little too long, just the way she’d remembered it. It flopped across his brow and touched the collar of his shirt. She felt an irrational desire to push it away from his eyes, as though he was a small child in need of tidying up.

But Josh Cooper wasn’t a child, she reminded herself. He was a dangerously attractive man. She had every reason to think the worst of him, but it seemed she might also have to work with him. Hazel eyes flecked with silver projected annoyance and a superior kind of smug satisfaction that infuriated her. Even so, she was obliged to swallow several times, wondering why her body felt so alive. Why her nipples should tighten and her pussy moisten while crossing swords with a man she actively disliked was a total mystery. It was insanity in its purest form.

“Since you both appear to have been struck dumb,” the other man said, “I’ll introduce myself. I’m Rex Moore, Josh’s business partner. And you, presumably, are Ellie Kirkwood.” Rex stuck out his hand. “Pleased to meet you.”

Ellie took his hand. His long fingers closed about hers, and her sensitized body sizzled with awareness. “Yes, I’m Ellie,” she said shortly, imagining that her face must be washed with color, playing havoc with her freckles. It always happened when she got mad, and right now she literally burned with anger.

“Well, now that we’re all acquainted, why don’t we sit down and talk about this?” Rex suggested. “Whatever this is.”

“Hands above your head, sweetheart.” He shackled her hands and then produced a blindfold. “If you can’t touch or see,” he explained, “your other senses will be greatly enhanced.”

“They feel pretty enhanced already,” she said, making no further objection when he placed the blindfold over her eyes.

“Hardly. To coin a phrase, you ain’t felt nothing yet. Anticipation is the key.”

“I need to come, Josh.” She rubbed her thighs together and twisted what he could see of her features into an agonized scowl. “I’m going crazy here.”

He tapped her outer thighs gently and they immediately parted. “You get to come only when I say you can.”

She made a sound that was a cross between a moan and a giggle. “It was worth a try.”

Josh pushed her legs wider apart and lowered his head. With provoking intent to discover her limits, he sucked on the lips of her pussy, drinking in her freely flowing juices as the tip of his tongue found her clit. It was too much for her, and she thrust her hips upward, screaming his name.

Further words became superfluous as she bucked her hips against his mouth and climaxed into it. He sucked the orgasm out of her, pleased to discover that she was uninhibited about her needs. Her body continued to spasm for some time after he removed his lips from her pussy, and a specious smile graced her lips.

“Sorry,” she said in a small voice. “You pushed me too far.”

He briefly considered getting her to suck him for a while but dismissed the idea. He’d been told many times that he had iron control in such situations, but right now Ellie had got him in such a state that he wasn’t prepared to put that theory to the test. He reached for a condom, tore the packet open with his teeth, and rolled it down his length. Then he maneuvered into a position above her, supporting his weight on his elbows. The tip of his prick nudged at her cunt, and once again her mobile hips rose up to offer him ingress. He no longer had sufficient control over his own reactions to chastise her for hers.

“Wrap your legs around my waist, honey,” he said gruffly.

As soon as she had done so, he sank into her, and they sighed with shared pleasure. He was big and thick, and her cunt was so goddamned tight that he almost lost it then and there, before he’d even gotten all the way in. How gauche would that seem? She closed about him, welcoming him inside like they’d performed this dance a thousand times before.

“You feel that, babe?” he asked breathlessly. “It’s just amazing.”

“I’m hurting you?” He made to withdraw, but her legs tightened around his waist and kept him in place.

“No, you’re just filling me, which is what I need. Fuck me, Josh. I need to feel you fuck me hard. Don’t treat me gently.”

“Music to my ears.” Josh slammed himself all the way home. He’d forgotten to ask her if she minded it rough. He’d obviously been right to assume that she didn’t. “Let me fill you. Tell me how it feels.”

“You’re right about the hands and blindfold,” she said, panting as she lifted her hips to keep pace with the increasing tempo of his thrusts. “Even my sense of smell is enhanced.”

“In a good way,” she said, giggling. “I shall always associate the aroma of sex with you from now on.”

“Stop talking and save your energy to fuck me,” she said on an anguished sigh.

Nice change of subject, Josh thought, but he didn’t have time to dwell upon it. His own climax was building, and he needed to get this show on the road. He grabbed a pillow and shoved it beneath her buttocks.

“Legs around my neck,” he said harshly. “I need to get deeper.”

She didn’t hesitate to comply, leaving her ass clear of the bed for Josh to spank. He did so, timing the blows to coincide with his thrusts. Her breathing deepened, as did her willingness to meet his thrusts halfway.

Ellie was a natural sub.

He felt her close the walls of her vagina around him and decided not to make her wait, mainly because he was so damned close himself.

“No need. Feel my cock fucking you. Feel how big you’ve made me and ride it for all it’s worth.” 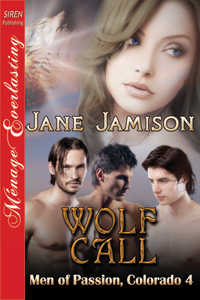 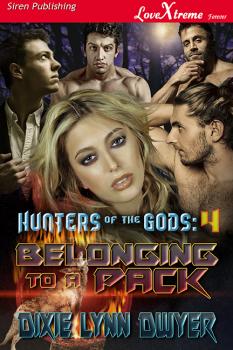 Hunters of the Gods 4: Belonging to a Pack (MFMMM)
Dixie Lynn Dwyer
In Shelf
$5.00
Tweets by
sirenbookstrand