Falsely accused of treason by her scheming stepmother in an attempted coup, Trilani Princess Syla enlists the aid of her handsome bodyguards Jake Odin and Luka Arma to save her from execution and clear her name. While vowing to help her reclaim her throne, can they also steal her heart?

Still mourning his lost lover, Luka is overjoyed to see Jake again, but he gives Syla a frosty reception. A passionate interlude between the trio leaves Luka shaken and wondering if he might finally be able to stop living in the past.

Following the death of her father, Syla must choose between remaining on Earth with the men she loves or returning to Trilan to clear her name and reclaim her rightful throne.

Damn it, all he’d done was come out here in the middle of nowhere to help her, and she’d thanked him by racking his nuts and trying to steal his pulse-gun.

Wrestling her under him, Luka finally pinned her with his heavier body. “Stop struggling.”

She was nothing but a little bit of a thing, probably not weighing more than forty-five kilos. He used care not to hurt her. Perhaps she was a child after all.

“Not hurt me!” She tried to buck him off.

“I told you I’m not going to hurt you. Stop wiggling.”

She gave up the struggle. “I stop now. Loosen me.”

Her white-blond hair was tangled over her face. Holding her slender wrists with one hand, he brushed the tresses away from her face.

Seeing her was like a punch to the gut. This was no child. This was an attractive woman.

His breath let out in a loud whoosh, and his cock hardened so quickly he got a little dizzy. Even after months of celibacy and a good knee to the groin, his body still recognized a soft, female form.

Her eyes were the most enchanting color—crystal blue with rings of emerald around the irises. He’d never seen eyelashes that long. Her beautiful face was heart-shaped, as were her pink lips.

His heart clenched as Kimini filled his thoughts. God help him, he was lusting after this woman, and he didn’t even know her. It felt like a betrayal of all he’d shared with his wife.

Sanity came tumbling back, and Luka eased away, still holding her wrists. “Are you hurt?”

“Where’s the other survivor?”

With a growl, he got to his feet, pulling her up with him. “I know you don’t know me, so I’m going to clue you in on one very important thing you need to know. I despise liars.”

Luka put his hands on his hips and glared down at her, surprised at how much taller he was. The top of the woman’s head barely reached his shoulder. Yet she stood toe-to-toe with him, those gorgeous eyes glaring right back as though she could match his strength and stubbornness.

Damn it all if he didn’t chuckle in response.

He’d never seen anyone move so quickly. One moment, he was laughing. The next, he was holding his foot and wondering if she’d broken a bone when she’d stomped his instep. “Wait!”

She scampered into the trees with the speed and agility of a doe, obviously more afraid of him finding her companion than any mountain lion.

He hurried after her, sore foot and all, so he wouldn’t lose her in the forest. “Wait!” he called again.

Luka rapidly gained ground, and he tried to grab at her long hair to slow her down. She dodged him and veered to her left.

“Oh no, you don’t. You’re not getting away that easy, you little minx.”

A cliff was approaching, and there was no way he was letting her run right over the edge. His fear gave him a burst of speed. He caught her at the edge of the woods, only a short way from the rocky edge. Arms around her waist, he tackled her, rolling to absorb the force of the fall with his own body. A loud whoof came from him as the wind was knocked from his lungs.

The fight went right out of her. She moved off him and knelt at his side. “Hurt you are?”

Luka shook his head as he panted for air. His lungs didn’t want to cooperate.

Her trembling fingers brushed the hair away from his eyes. The scent of flowers rose from her skin. “Sorry. I am sorry.” She laid her palm against his cheek.

Funny, but her mere touch seemed to restore his breath, and what little pain he’d had from the fall vanished. His dick, which had just begun returning to its bored state, rose to attention again.

Then recognition hit. The accent. The white-blond hair and two-toned eyes. The healing touch.

Her eyes widened, and fear was clearly written on her features. “Not. No, no. Not Trilani.”

He didn’t like seeing her afraid. He especially didn’t like her pulling away from him as if he were the danger. She seemed so fragile, so vulnerable.

When she tried to stand, he seized her wrist. “Wait. Where’s the other survivor? I saw two sets of tracks.”

She let out a shuddering breath, moving her focus from him to the trees and back again.

Jake rolled to spoon against her back. He’d awakened hungry for his lovers. While the three of them might not have the same goals for the future, they shared a sexual connection that was unequaled. Sure, he, Luka, and Kimini had enjoyed each other, but the closeness Syla brought to the men surpassed that level. They had something very, very special going, and Jake never wanted it to end—wherever they decided to live.

He rubbed his hard cock against her tight ass as he nibbled the soft flesh of her neck.

She moaned and ground her backside against him.

Now if only Luka would wake up…

As if on cue, Luka groaned and rolled toward Syla, capturing her mouth for a hot kiss. Since everyone seemed on board with making love, Jake slipped his hand around to cup Syla’s naked breast.

She whimpered, pressing her backside against his dick before rolling on top of Luka. “Are you awake?” she said, her voice a husky whisper.

Luka didn’t reply. He simply cupped her neck and pulled her down into a heated kiss.

Jake wasn’t about to be left out, and Syla had just put herself into the perfect position for the next intimacy he wanted to introduce her to. Although the sex the three of them had shared had been satisfying—and fucking hot enough to start forest fires—there was one thing they hadn’t done that Jake needed to finally feel as if their trio had become a committed group.

He crawled over Luka’s legs to put himself behind Syla. Holding her hips, he worked his cock between her thighs, brushing over her pussy and loving how she pushed back against him. “Wanna learn something new, sweetheart?”

Luka’s gaze caught Jake’s as his eyes widened. Then a slow smile spread over Luka’s face. “There’s some aloe on the nightstand.”

“What do you wish?” Syla asked, watching as Jake reached over to grab the little bottle.

Dropping the aloe within quick reach, Jake brushed her long hair forward and massaged her shoulders. “I want the three of us to fuck at the same time.”

Her quick intake of breath boded well. Syla was a passionate woman, and everything the men had tried with her had always pleased her. He hoped this intimacy would as well because it was one of his favorite things about having two lovers at the same time—a need to feel that all three were equally involved and not simply taking turns.

Luka chuckled. “Oh, yeah, honey. It’s possible. And it’s damned hot. Since I’m in the right spot, how about we show her, Jake?”

Syla had an idea of what her men wanted, but a shiver of fear ran through her when she thought of them both possessing her body at the same time. Both Jake and Luka were large men, and she was such a small woman. She reminded herself that they had brought her pleasure like she’d never known time and time again and let that help quell her anxiety.

“Ride me, Syla,” Luka said, holding his cock for her.

She rose up to let him slide inside her. The feeling of fullness she had whenever one of them was joined with her was beyond compare. Yet she worried whether her body could accommodate two men.

Luka thrust his hips up, distracting her and starting the slow burn of desire that curled out to all of her limbs. Jake’s fingers were tickling down her spine, adding to the myriad of sensations she wanted to savor.

“Lean down, sweetheart,” Jake coaxed as he gently urged her forward. “Rub those beautiful breasts against Luka while I get you ready for me.”

The touch of the crisp hair on Luka’s chest made her nipples tighten and tingle. She kissed him, sliding her tongue past his lips to mate with his and capturing his growl. Her kisses must have pleased him because his hips surged up again until he was as deeply planted inside her as possible.

Jake’s hands were on her backside, separating the two cheeks. His finger slipped between to find her most intimate spot and swirl something cool and wet around and around.

Syla hissed out a breath, but Luka kept her busy. He stopped moving and held her close, kissing her and sucking on her tongue. She relaxed, and when Jake slid a finger inside her, she didn’t flinch.

“You’re so tight,” Jake said as he stretched her wider by adding a second finger.

She didn’t know what to say in response, not even sure she could form words in his language. This was surely the best feeling in the world. At least that was what she believed until Jake pulled his fingers back and pressed the hot head of his cock against her.

He gently thrust past the ring of muscles, then pushed against her, again and again, sinking a little deeper each time as though teasing her with what she wanted.

Syla took control, moving back hard against him until his cock was all the way inside her. She moaned, loving that the three of them were now connected in a way that was beautiful and giving.

“I can feel you inside her, Jake,” Luka said, rocking his hips up.

“This is fantastic,” Jake replied. 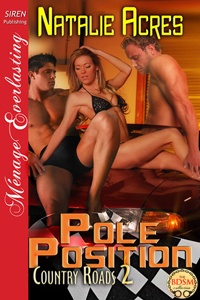