Heat Rating: Sextreme
Word Count: 44,651
29 Ratings (4.6)
Contemporary Menage a Trois/Quatre
In Bookshelf
In Cart
In Wish List
Available formats
ePub
PDF
HTML
Mobi
Cover Art by Les Byerley
Reviews
Couldn't put this book down until I was finished with it. I loved it and can't wait for the next one. Ms. Dwyer doesn't write any bad books, they are all good.
rhondavb
I loved this book! Third in a wonderful series.

Antoinette is a gutsy girl running a coffee shop that makes great sweets.

The series gets better with each book.

“What is this?” Stone asked, walking up to Emerson’s desk and picking up the fancy pink box. It had the wordBliss on it in stylish script. As soon as he lifted it, he could smell something incredible.

“Oh, just some raspberry brownie bites. I stopped at a place for coffee and a snack, but then you called, and I couldn’t indulge in the pleasure. Of course seeing Olivia had made my satisfied belly sick,” Emerson said, and then he stared at the box. Stone had a funny feeling.

“What look?” Emerson asked then quickly turned away.

Stone undid the bow and opened up the box. “Wow. These smell and look incredible.” He picked one up, knowing that he would need to work out a bit more in the gym later if he ate more than one, and took a bite. He felt that instant satisfying feeling inside. It was like finding pleasure in one simple bite. “Holy shit, these are fucking fantastic.”

Emerson leaned back in his chair, elbows on the armrests and pen in one hand. He was smiling at Stone.

Stone reached in and took another one, then leaned against the desk. He took his time savoring the taste. “Where did you say this place was?”

Emerson looked at him and then the box. His best friend seemed to be daydreaming or something.

“Dude, where’s the fucking place? What’s wrong with you?”

“It’s in SoHo. Man, Stone, it is a really nice little place, and there was this barista—”

“A fucking gorgeous barista.” Emerson shook his head and closed his eyes. Stone chuckled. He had never seen Emerson act like this. The man was straight-faced all the time, and never sought out women. He was particular about who he slept with. He hadn’t even liked Olivia, but Stone had talked him into sharing her, and she was all for it.

“What did she look like?” Stone found himself asking.

“She had brown hair, big brown eyes, and thick, long eyelashes. Her lips were sensuous and she was petite, Stone. I’m talking no more than five feet four.”

Emerson’s eyes widened. “And her body?” he asked. He was getting excited. She seemed too good to be true.

Emerson leaned forward in his chair.

“Stone, she has an incredible body.”

“When are we going back there?” Stone asked and Emerson widened his eyes and then shook his head.

“What the fuck do you mean we can’t? You described her as if she’s the woman we’ve both have fantasized about. All you have to tell me now is that she’s smart, isn’t a stalker like Olivia, and that she’s single.”

“Too young? How fucking too young?” Stone asked, feeling himself getting all worked up over a woman he hadn’t even met.

“Young,” Emerson said then nodded his head as if totally disappointed and there was no need to continue the conversation.

“I think she’s in college and working there to pay her way. It would be too much of a worry if she were over twenty-one to date her and know if she could be trusted. Olivia is in her twenties. Look how her true colors came out. It’s not worth the chance.”

Stone ran his hand up and down his cheek and chin, feeling his dusting of whiskers right on schedule of late afternoon.

“Maybe she just looked young? How do you know she doesn’t have money? Why would you think the worst about her? Was she wearing a lot of makeup? Maybe some foundation, too?”

“That’s something else about her, she wasn’t wearing any makeup. She could be working her way through college. I don’t know. As attracted as I was to her, I would worry about her intentions, too. Women cling to men in our positions. It’s hard to differentiate the truthful ones from the liars.”

“Fuck. You had me so fucking excited until you let me know this chick could be on a Clearasil zit commercial for teens. Is there any way that you could be wrong? Maybe Olivia has spooked you?”

“Spooked me? Hell, I can’t stand that woman. No, this is different. I’m telling you that she’s probably underage.”

He grabbed a hold of the box, pulled out another brownie bite, and popped it into his mouth. As he chewed, he stared at Emerson and saw his disappointment.

“Well, I don’t know if I can wait three years to check this woman out. Maybe another trip there this week will be in order for you. You can find out how old she is, if she’s in college, and if she’s single.”

“I don’t know. She saw me in my business suit. She’s going to assume that I have money and I’m set.”

“You don’t know that. Hey, but if you go in there and converse with her, find out more about her, just don’t mention that you’re a fucking billionaire. Say you work for the company, but you’re at the bottom, making your way up.”

“Lie to her? I don’t think that’s the best way to start off a possible encounter with the woman. She seemed sweet.”

Stone raised one eyebrow at Emerson.

“So did Olivia until her beast claws came out. Play it safe. Feel her out and if you think she is what we’ve been both looking for, then let me know and I’ll go with you the next time.”

Emerson sighed. Stone couldn’t believe that they were actually discussing this woman in such depth. They always did what they wanted, and went after any woman they were interested in. Sure, sometimes they were pompous and demanding, but they had yet to meet a woman who captured their hearts. Starting off with a little lie or in this case, nondisclosure shouldn’t be a big deal if things progressed.

“I guess when I go meet the clients on Thursday I can stop in for another coffee.”

“Yeah, and grab another box of these. These are incredible.”

She parted her lips and allowed Emerson to feed her shrimp. Stone took a few bites of some raw clams and then the baked ones. Then Emerson did the same while Stone fed her a raw clam and then another shrimp. They were spoiling her, arousing her senses.

When they finished, Stone touched her cheek, and she tilted her head up toward him. His lips were inches from her own.

“You are so beautiful, Antoinette. I want to taste you. I want a lot from you. Do you trust us?” he asked, and suddenly her heart beat a bit faster. She was surprised at the feeling of guilt she felt. She hadn’t been completely honest with them. They didn’t even know her nickname, that all her close friends and family called her.

She felt Emerson’s hand move under her dress and over her knee. He began caressing her skin, moving slowly higher and higher, and her pussy ached for his attention.

“I don’t know you well enough to trust you.”

“You can trust us to take care of you, to protect you, and bring you pleasure. Have we done anything you haven’t enjoyed yet?” he asked her. She shook her head and stared at the very serious expression in his eyes. His voice was low and deep, and had the air of dominance and control in it. He seemed different.

“I want to touch you. I want to bring you pleasure,” Stone whispered then leaned forward and kissed her lips softly before pulling back. Her eyes closed and then slowly opened, finding both men watching her closely.

“We both want you to feel comfortable with us. We’re willing to take our time, but there are things that really turn us on, and we want to share that with you. Can you trust us to not go too far?” Emerson asked, and then smoothed his hand a little higher up her thigh. Back and forth, she was nearly lost in the stroke of his fingers against her sensitive skin, and then felt the tips touch her panties. A quick intake of breath, and she nearly burst right there. Her nipples hardened, her breathing felt shallow, and she nodded her head, agreeing to what, she didn’t know.

“Good girl. Remember when I said that there were rules?” Stone asked as he continued to kiss along her neck and collarbone.

“Yes,” she replied softly, their touch stimulating her senses and nearly sending her into a trance.

“You must obey us. If you do, then you’ll be rewarded.” Stone took that moment to add a little nip of his teeth against a very sensitive spot on her neck.

She gasped. “Obey you?” she asked, feeling a twinge of fear and excitement suddenly overcome her.

“Obey us,” Emerson said as he leaned forward and kissed her lips.

Antoinette took an unsteady breath, but staring into these two men’s eyes, she knew she wanted them. Anything they asked right now, anything to gain more insight into who they were and what they were made of, encouraged her to give their rules a try.

“Uncross your legs, and open up for us.”

Holy fuck! Where the hell did that come from?

Toni was in shock. But not so much a total outrage and “how dare you ask such a thing” way. No, she was completely sideswiped by their brazenness, and utterly turned on. Emerson tapped her thigh, and she slowly uncrossed her legs. She felt them shaking.

Both men caressed her thighs.

“Baby, don’t be scared. I guarantee, you’re going to love following our rules. Listening to our commands and our voices leading you to the next level is guaranteed to make you come like never before. We want you. We want to explore what is going to be ours very soon,” Emerson said, and then she felt his fingers move between her thighs and against her panties.

He gently stroked her pussy against the thin material. She parted her lips and tried to remain still.

Emerson brought her wine glass to her lips. “Take a sip. It will help you to relax.”

A sip? Give me the damn bottle to chug, I’m already about to explode and he hasn’t even inserted anything into me.

Emerson lowered the glass then cupped her cheek and kissed along the edges of her lips. His large hands held her face and chin in one hand, while his other hand began to play with the knot of her top behind her neck.

“These are going to have to go. Lift up, baby,” Stone whispered. She did as he said and felt him pull her panties down her thighs. As she lifted higher, using her hands on either side of her for support, Emerson undid her top. She covered her chest and the material, afraid that it may fall.

“Put your hands on the table in front of you, and keep those thighs parted.” Stone’s deep, hard voice made her instantly react to his commands. 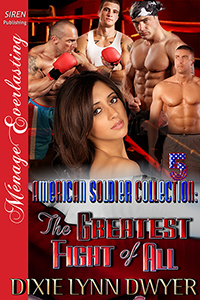 The American Soldier Collection 5: The Greatest Fight of All (MFMMM)
Dixie Lynn Dwyer
In Shelf
$6.99 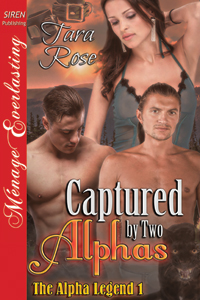 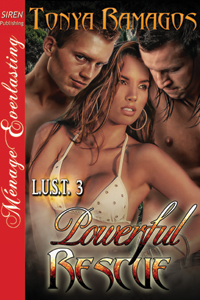