Salt, sand, sun, and soul. Professional surfing is Drew Johnson’s sport, but after a bad break at last year’s competition, he’s been looking to make a strong comeback. He needs to outsurf the famous Australian champion, Shawn Kennedy -- sex on a surfboard.

Shawn has it all: talent, looks, money, sponsorships, endorsement deals, but all he really wants is Drew. Fraternizing with competition is against the rules and both risk losing more than just their sponsors. The two competitors will have to decide how far they’re willing to go. How many rules are Drew and Shawn willing to break for love?

As the romance heats up, so does the competition. May the best man win ... 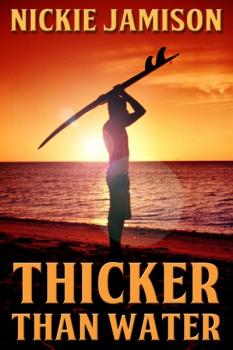 “Sorry if your beer’s warm, mate. Got cornered by someone from Carve,” Shawn said.

Drew watched Shawn pull the lime wedge out, squeeze the juice into the neck, take a swig -- goddamned sexy -- and push the lime down into the bottle until it landed in the beer with a plop and a fizz.

The lime wedge in Drew’s beer wasn’t as easygoing and he was struggling to get a grip on it to squeeze. “Damnit.” The lime launched from between Drew’s fingers and into Shawn’s lap.

Shawn chuckled. “Here let me.” He retrieved the wayward citrus slice from his crotch.

Drew handed Shawn the bottle, heat flushing into his cheeks.

The lime juice shot into the bottle, a brief bubble of white foam, and Shawn handed it back. “Try it.”

The lime didn’t make Corona any better, just tolerable. Drew swallowed and smacked his tongue against the roof of his mouth. “It’s okay.”

Shawn reached over and shoved the piece of lime into the neck of Drew’s beer bottle until it fell into the yellow swill.

“What did dude from Carve want? Exclusive interview after you kick Bussone’s ass tomorrow?” Drew asked.

“Something like that.” Shawn exhaled and rubbed his knee. “I hate press parties, mate. Can’t stand the pertinacious bullshit. All the shit talking, not my thing.”

“Mine either,” Drew admitted.

“I’d rather be out there.” Shawn nodded his head toward the ocean. In the moonlight the cresting waves were slashes of silver against the black water.

“Me, too.” Drew gingerly sipped his beer. Lime or not, Corona was not his thing. He set the bottle on the step beside him. “Is that why you’re sitting down here with me hiding instead of being the man of the hour?”

“Pretty much, mate. Why’re you hiding with me?” Shawn flicked his curly ponytail back over his shoulder.

“Sweet,” Drew said. Shawn’s hand brushed against Drew’s. Drew didn’t shy away and neither did Shawn.

Shawn’s fingers moved back and forth over Drew’s knuckles, the contact thrilling Drew. Heat settled in Drew’s belly; he wanted to lean over and press his lips to Shawn’s, but he didn’t dare. Usually it was Drew who took charge, went in with both guns blazing, fucking men he wanted to fuck, but Shawn was a different game and Drew wasn’t sure what the rules were. The only thing Drew was certain of was that Shawn had the power to end Drew -- damage his career and his soul. Drew let the caress of Shawn’s fingers on his and the crashing of the waves drown out the din of the party behind them.

Drew turned his head. Shawn’s lips met his. The tartness of lime and the bitterness of hops, coconut, and honey, the salt of the ocean. Drew parted his lips and let Shawn’s tongue invade him, exploring, tasting. Drew pressed back into the kiss, giving pound for pound, rough. He wound his fingers into the Shawn’s golden hair, pulling him into the kiss.

They parted, panting, their foreheads resting against each other. “Goddamned. I have wanted to do that for so long,” Shawn said. He kissed Drew again, a swift chaste peck on the lips.

Aussie, fucking sexy as hell. Drew extricated himself from the embrace. “I think we just broke a shit tone of rules.” Drew rubbed his jaw, stubble scratching at his palm. He really should have shaved.