It's not unusual for the bride to have sex on her wedding day. But when the bride is begging for another man to take her hard and fast in front of a startled bridesmaid that's unusual. Not that Stella Rowallan wanted to watch. She walked in on it and now she can't walk out. The man taking the bride is bad, wild and hot. Stella knows she should be appalled. But she's not. She wants him. What is it was bad boys that make them so damn good?

But all bad boys have a past and Kit Kincaid is no different. He is a self confessed thief who likes to have sex in wild, daring places. And Stella Rowallan is just his type of woman - shockable yet willing. But he has a problem. A freaky witch woman and her followers are chasing him for a stolen stone idol. Kit has it and he plans to sell it. Can he have both Stella and the idol or does something have to give? 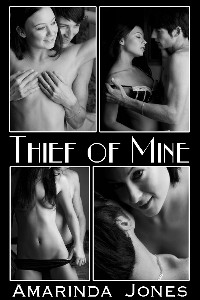 “Holy crap!!” Stella Rowallan shrieked out loud as she stopped in amazement and took in the scene before. Of all the things she expected to see going on the brides’ room this was not one of them. She expected maybe to see bridesmaids fighting over flowers, possibly the damage of a stiletto heel through a hem, perhaps the bride’s mother rushing around in a panicked frenzy or even something fairly simple like the bride dancing drunkenly after one too many glasses of the champagne that they had opened earlier. None of that would have surprised Stella. She had been to weddings before. She had seen and coped with all that and worse.

However this was different. Stella had not expected to see the bride bent forward over a chair, her white bridal skirts thrown up in wild disarray as a man thrust his cock in and out of her exposed and clearly willing backside, as she screamed at him to go faster and harder. That was unusual. But that really wasn’t the thing that threw Stella the most. It was more that the man who was enthusiastically shagging the bride was not the groom. In fact he was a stranger. A stranger with a muscled, flexing butt directed straight at Stella and seemingly not about to stop what he was doing. How did one cope with that?

Kit Kincaid, the man in question, heard an intruder enter the room but he did not stop as he thrust back and forward into the bride’s ass. Why should he? He was enjoying himself and the bride had all but begged him not to stop. The pleasure between them was mutual. Kit did not care if another person was standing open mouthed and staring at him. As long as it wasn’t the groom of course. It would be hard to explain why he was inside the man’s soon to be wife’s body. The thought of telling the groom that the bride had begged him to fuck her was not a conversation he wanted to have with any man just about to get married. However anyone else could watch. In fact, Kit kind of enjoyed it. He liked to shock people and sensed that the intruder was most definitely shocked.

“Do you want to join in?” Kit turned to look at the intruder, grinning widely at the startled woman who stood behind him, hers eyes on his butt. She was opened mouthed in astonishment and dressed in an ugly pink dress that did not become her, nor probably any other woman on the planet. However, despite the dress she was kind of cute standing there looking all stunned and outraged. Kit Kincaid had a thing for prissy brunettes. And he certainly wasn’t adverse to having an audience or having another woman join in on the action. In fact the thought of it spurred him on and the bride shrieked out loud as he increased his thrusts.

“I… What? No!” Stella as she moved further into the room without realizing what she was doing. She was stunned, mesmerized and amazingly jealous. A definite absence of sex could do that to a woman. Stella was starting to think all sorts of things she knew she shouldn’t but damn it, just watching this man rhythmically thrusting back and forward into the bride was making her hot and aching for action. How could he keep doing that when he had an audience? Did the man have no shame or sense of decorum? Why was he grinning at her as if he was enjoying being found with the bride like this? Did he not care that was taking another man’s woman on their wedding day?