When Edward inherits the family textile mill from his deceased parents, he knows where his duty lies. As a young Victorian gentleman, he devotes himself to the family business and doing right by his customers and employees. What concern is it that he surrenders his own artistic ambitions and romantic passions?

But a hideous accident at the mill one day brings him into close contact with Mori, one of his most productive workers, a beautiful yet seemingly delicate and vulnerable young man. Edward takes Mori under his protection, bringing him back to his house. At last, Edward has found a friend and companion. His fascination for Mori grows swiftly into love, and he’s drawn out of his quiet introspection into a world of delight and passion.

Yet Mori has a private task that both baffles and concerns Edward: the completion of a stunningly beautiful, abstract tapestry. Edward doesn’t understand its significance, Mori’s devotion to it, or Mori’s strange behaviour when Edward tries to part the man from his mission. Mori loves him in return, he’s sure – but can that ever be enough? As Edward is tangled more deeply and irretrievably into the web of Mori’s love and mystery, what bittersweet price might he have to pay?

NOTE: This story was originally published in the anthology Masquerade. 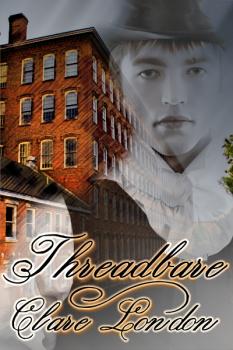 At midnight, I woke suddenly to find my guest out of bed and in my own room. There was only a single candle alight on my bedside table, sweeping large and mysterious shadows around anything that moved. Mori stood at the foot of my bed, barefoot and with the hem of my ridiculously large shirt hanging down below his hips, clutching his tapestry against his chest. I had brought it to my room to examine it further before I retired for the night. Did he think I’d intended to steal it from him?

I sat up in bed slowly, my heart thudding hard with the shock, but I was wary of scaring him in return. “It’s safe with me,” I said. “Go back to your bed, Mori.”

But he didn’t move away. He no longer seemed like a nervous, skittish animal. He stood calmly and gazed back at me. “I want to come to your bed,” he said, softly. “I want to be safe with you, too.”

I didn’t know what to do. Is that so shameful, considering my more advanced age and my presumed wisdom? But I couldn’t answer him; couldn’t move either to encourage or dismiss him. Instead, I watched him lift the coverlet and slip into bed beside me, and I thought I’d cease breathing from the excitement and the fear. He pressed against me as if to meld our bodies together, and I could feel his heart beating under his narrow ribcage. His hand ran down my back and I arched against it. He kissed gently at my jaw, his lips very moist and sticky with his warm, eager breath.

He’d been obedient and grateful since I brought him home, and for a horrifying moment I thought he might be offering this purely as an obligatory part of his employment. If I were honest, I knew there were plenty of other factory owners who used their employees in such ways, both male and female, sometimes at a shockingly young age. But Mori was old enough to understand this, and I’d also given him the chance to refuse without giving me offence. Hadn’t I? He seemed genuine in his desire to be beside me.

He knelt up, his hands stroking underneath my nightshirt, lifting it up over my head. I undressed him in the same way, though my hands were trembling. His eyes glinted in the shadowy dark, gazing at me. His body was smooth and slim, and his skin almost translucent. He was astonishingly beautiful. He kissed my shoulder and he whispered against me, and when he nudged my knees apart with gentle hands and dipped his head down, I felt the wet trail of his saliva along my inner thigh.

I held my breath, hardly daring to hope, and yet so very confused as to what I was hoping for.

His lips slid down over my half-erect cock, taking me into his mouth, hesitantly at first and then more boldly. He licked me, savouring me, and all I could do was listen helplessly to the soft, sucking sounds that came from between my paralysed legs. I felt myself swell in his mouth, felt heat in my groin that consumed me. When I came, I cried out shamelessly, for I’d never known anything like it. I think I gripped his hair too tightly, but he didn’t protest. For several long, delicious moments he continued to lick at me, drinking me, caressing me. It was as if he cleaned me of the astonishing burst of hot, thick seed that had been brewing inside me for far too long.

And when he lifted his young head up to mine again, I saw his lips glistening and the pleasure in his half-lidded, smiling eyes.