When an earthquake hits, Mackenzie and two of his co-workers are forced to take shelter in a refuge chamber three miles below ground, uncertain of the damage around and above them. Weighing their options, the three must decide whether to stay put or take their chances climbing to the surface, though making it to ground level is just half of the battle. 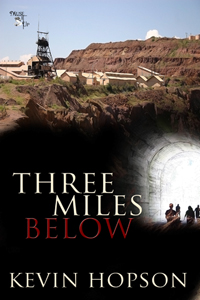 This is a great and suspenseful story that will hold your attention captive from the begining to the end. Imagine being trapped in mine and trying your very best to not only get you out but get the men, your friends, out with you. The horror and fear the characters feel in this story jumps from the pages right into your mind and you are able to feel it too. Kevin Hopson is able to write with enough detail and emotion to allow you to not only read but live the story. Jenn-5stars

I placed the hard hat atop my head, fitting the goggles snug to my face. Daemon and Tayt followed suit. We also wore gloves, dust masks, knee guards, and forearm guards. Despite there being some natural ventilation throughout the mine, the air quality likely had deteriorated.

Not wanting to debate, I stepped aside, granting him his wish. Kneeling next to the hatch, I grasped the giant wheel handle with both hands, Tayt ultimately coming to my aid.

“You know, Daemon.” I chuckled. “You should be the one doing this.”

“You got that right, Mack,” Tayt teased.

Daemon grinned as he towered over us.

The handle finally budged, allowing me to push the door ajar. Just as Daemon bent down to stick his head out, another quake struck. Small rocks, dirt, and dust descended from the tunnel roof outside, at least from what I could see with my head lamp. Daemon, still hunched over, blocked the chamber exit, effectively sheltering me and Tayt from the falling debris. The trembling subsided a few seconds later.

“It’s not uncommon,” I replied, “especially with weaker quakes.”

I looked up at Daemon. “I think it’s safe for the time being, so let’s move while we can.”

He helped me back to my feet and then took the lead.

Once outside the chamber, I lifted my head to the ceiling, aiming my light at the view above. Tiny pockets of debris, mostly rock particles, peppered my goggles on the way down. Steel frames, reinforced with nine-inch nails, supported the weight of the rock face around us, while safety mesh kept larger fragments from falling through.