Benji, a lonely 1930's farm hand, is smitten with Molly, the farm owner's mischievous middle daughter, only he won't tell her. Scarred from a tragic accident, he keeps to himself. Fearing ridicule or rejection, he prefers to sketch her as she works from a distance.

Their paths cross often as Molly goes about her duties milking the twenty Jersey cows in the barn. Nothing ever comes of it until one day Molly discovers Benji's notebook. Not knowing who her secret admirer is, she invites him to introduce himself, only to receive another anonymous love letter.

Benji discovers a knothole in the side of the barn and he can't resist watching her react to his letters. When Benji is caught peeping by his two bunk mates, Garth and Hugh, Benji is certain he has lost Molly forever. But to his astonishment, he gets more than he bargained for when Molly treats his anonymous cock to the ride of its life. Molly has one last trick up her sleeve though, and she pulls a prank that not even Benji can fathom. 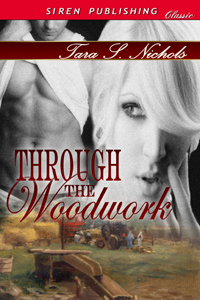 5 STARS: "She was raised on the farm, but she dreamed of a career in writing. She went off to boarding school in the city, but she came back in the summer. During this summer, a secret admirer kept leaving her notes. She soon started leaving him notes. Will they end up taking a roll in the hay? I will never look at a barn the same again. This story had great sex scenes, but it was much more than that. It was sweet, tantalizing, and romantic. I recommend this!" -- Ashley Turlington, ReviewYourBook

5 KISSES: "Through the Woodwork is beautiful. It's a sweet love story. Both Molly and Benji are virgins and discover sex with each other. I liked how Benji was true to Molly even though the other farmhands had sex with her older sister. Molly was not drawn to them and their roughness. Benji was gentle and shy. Molly was tender with him and his scar was not a barrier for her. She loved him for his gentleness. I loved the ending. Both were aroused by the other and loved the other. I could feel their love and gentleness with each other. I felt satisfied by it and am glad I read this sweet, tender tale." -- Sheila, Two Lips Reviews

"I found Through the Woodwork to be a very sweet story with an added spice at the end. I loved how Ms. Nichols was able to paint the mental picture of the loving but shy Benji so that there was nothing I wanted more than to see him get the girl...for those who like an old fashioned story with a sexy twist at the end then you need to pick up Through the Woodwork." -- Tanya, Joyfully Reviewed

The well-worn knothole offered a discreet view of her lithe little figure. Peering through he saw, to his delight, that she wore the pale blue dress, the one that synched in tight at her waist, accentuating her hourglass curves. The low-cut bodice revealed enough soft curving flesh to tantalize, yet leave a modest amount to the imagination. He silently commended her on the length of her skirt, showing just above the knee. True to form, she’d sewn herself a scandalously revealing frock.

She bent and busied herself with the task of manually milking each of the twenty Jersey cows while he held his breath, anticipating the moment she would discover his note. Oh, how he wanted to lift up the tails of that skirt and act upon his carnal urges. He knew it was wrong to entertain such lewd thoughts, and he tried as best as he could to refrain, but his breath came hot and fast, blowing off the rough wood plank and back into his face. His hand dropped to the fly of his work pants and he absentmindedly brushed his knuckles along the bulge growing there. Closing his eyes he imagined it was her touching him, caressing him, and his heart threatened to rift into two. Gathering his wits he drew his hand away again and forced his eyes open. He’d come with the best intentions, to secretly woo her, not to jerk off to her.

Finally Molly came over to the place where he’d left the note. This time he’d placed it where he was certain she would find it, on the milking stool. He watched as Molly’s eyes widened with delight upon seeing it. For two days they’d been carrying on in secret. With each note, he’d grown more confident, taken bigger risks and was rewarded by her smile. He’d never seen her look as radiant as she did just then.

Inspired, he pulled out his pencil and sketch pad. With fast loose movements, he wrote out everything he felt in his heart. 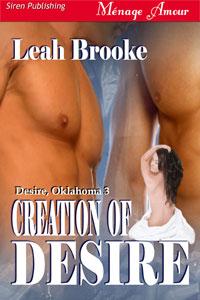 Leader of the Pack
Leighann Phoenix
In Shelf
$8.99

A Bride for Two Roughnecks (MFM)
Helena Ray
In Shelf
$5.99
Tweets by
sirenbookstrand