When the island volcano erupts and buries neighborhoods, life gets very exciting for helicopter tour pilot, Keoni. His home is threatened by rapidly spreading lava, so he’s staying with his lifelong friend Steve. Keoni has never felt any chemistry between them before, but his feelings for Steve change as things turn deadly even in supposedly safe areas.

Keoni carries newsmen, cameramen, officials, politicians, and performs rescues on flight after flight. As his home is destroyed and more neighborhoods crumble, his emotions run high, and his feelings for Steve grow. But he screws things up between them as he leaves for his last flight of the day, maybe of his life. Could things get any worse? 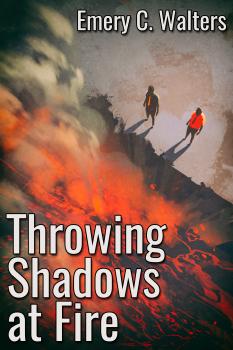 Since my place was likely the next victim, we went in, and I went upstairs to my place. Steve started taking valuables out of my housemate’s apartment on the first floor. I’m sure we looked like thieves if anyone saw us, but there was nobody else around and no time to explain anyhow. I ransacked my place, but I’d always kept my things organized so I was pretty sure I’d get everything I wanted. That’s just the way I was.

I was still upstairs when the propane tank behind the third house blew up. I glanced out the window and watched it arc past, tumbling flames and smoke, crashing onto the back patio of the first house.

Steve came running up the stairs two and three at a time, screaming my name. I thought that was actually kind of funny, until he grabbed me and I saw the look on his face.

“Damn it, Keoni, I thought you were trapped! The back of the house is on fire!”

He was breathing so fast, I thought he was on fire. I wanted to tell him that he’d finally had the chance to scream my name ... but it wasn’t funny anymore. I saw how serious he was. I took one last look around my home and let him drag me down the stairs.

Somewhere in the middle of the living room, I tripped. And that’s when fire burst through the patio doors. Glass shards went everywhere; fire hit the drapes and a pile of magazines in the corner. My downstairs neighbor was a bit of a packrat. I groped for the couch or the table leg or something but was coughing too hard in the smoke to see anything, let alone breathe, though since I was coughing, I must have been able to breathe, right? You’d think so, but inhaling didn’t seem like a great idea either.

Then, out of nowhere, a mask was shoved over my face and strong arms pulled me toward a vague shadowy rectangle of lighter smoke: the door. Then more arms caught me, and we all tumbled down the steps onto dry, still green, grass. The first thing I could see was, had to be, a mirage. A goat was calmly chewing the grass and then reached for my collar and went, “Maaaaa,” as it tried to eat that, too.

“Get in the damn truck!”

The goat and I jumped in fear. Then we were picked up like sacks of wheat and tossed into the truck. Thank the Lord for small favors, big ones in proportion, and for extended cabs, as there were now four grown men and a goat inside the truck cab. Oh, and Morticia the cat, who had apparently escaped the box and climbed back into the hot cab anyhow. Someone landed on her, and she did not look pleased to be moved.

I could still barely see and realized it wasn’t because of just the smoke. Maybe I had glass in my eyes, but they stung something terrible, and everything was blurry. “Who’s this? Where’s the goat from? What’s going on? Who are you?” I asked in a tumble of words. My heart was pounding. Why had Steve been screaming at me?

There was a sudden wave of heat that seemed to push the truck backwards, but I realized it was just Steve backing the truck up in a hurry. I could see enough out the front windshield that houses one and two and three were all burning or smoldering. I couldn’t tell if they’d caught fire from the heat, from a burning tree branch falling on the roof, from the exploding propane tank, or from the red hot lava that was pouring over all three back patios and onto the first-floor walls.

Steve said, “I’ll drive; you talk. Not you, Keoni, you just keep quiet. Here, pour some of this water over your face and in your eyes. And drink some. You know you never keep hydrated.”

I said, “Yes, dear,” drank, and passed the bottle.

Someone took it. They fed the rest to the goat. The truck bounced over the road back the way we had come, only now there was a wall of lava edging toward the last bit of grass and bushes alongside it. I could hear popping and hissing sounds. And the goat. The cat was now curled up in my lap, purring, so there was one good thing. And Steve wasn’t screaming my name anymore, so I had stopped giggling about that. But who were these other two guys?