Love should be celebrated. From the man who can’t let go of the love he lost to the police officer giving his heart to a criminal, Tidbits of Love features 15 short and sweet stories celebrating the love between two men.

Take a step back in time with Joseph and Ephraim in “Kiss of the South.” Leo and Caleb learn the power of apology in “Let It Hurt.” A blinding snowstorm threatens to keep Elliot and Nathan apart. Koyote and Amadeus are about to start a rather unusual family in “Green Ball of Fluff.” And Jasper’s missing dog returns with something special in “Lost and Found.” 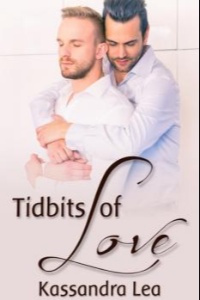 EXCERPT FROM "The Last Night"

Storm jerked back, still disturbed by the hint of doubt in Timothy's words. His reaction would probably be the same next year and every year after it. What could he have possibly done in their short time together to ever make Timothy question his love? Oh, the amount of time he'd spent trying to figure out where he might have gone wrong. It never occurred to him that he should have asked, and now it was far too late.

Storm cupped Timothy's cheek in his hand, his eyes searching those of his lover. "Forgive me, my love. It was never my intention to make you feel any less than the sunlight on my cloudy days. It is the love we share that brings me hope each and every day, a glimmer that this world isn't so bad." He realized just how cheesy it all sounded and yet, here he was happily repeating the phrase for the umpteenth time, always wishing he could have said more, could have had the time to show Timothy just how much their love meant to him. "You know my job," he continued, wondering if by some chance confessing the true nature of his existence might have had a hand in Fate taking his Timothy away.

Reapers were meant to pass through the world sight unseen until the moment they arrived to possess a soul.

Love wasn't supposed to be on the table, but there was his Timothy, sweet beloved Timothy.

On what had originally been a spur of the moment, he took firm hold of Timothy's hand and practically dragged the surprised men toward the front door. Back then he didn't really understand what the hell he was doing, but now that he was reliving the moment for the umpteenth time, he saw that it made sense in its own little twisted way. Out the door they went and down the steps of the porch into what remained of the autumn storm, now nothing more than a drizzle. The clouds were starting to break apart allowing for a glimpse of the stars every now and then.

Storm gestured at the long gravel driveway, the surrounding trees, the faint glow of lights at a house some distance away. "All around us life is thriving and dying, people are going about their evenings without much care, and all I ever want to do is be here with you, Timothy." He glanced into those dark eyes. "The world could fade away, and as long as I have you, it wouldn't matter."

"D-d-do you really mean that?"

For some reason he chuckled, drawing Timothy to him. "My dear, I meant every word and then some. I would give up everything I am to never spend another day without you by my side." And his heart broke again.

Why couldn't it have played out that way?

It was hard to tell if Timothy was crying or if it was the work of the cold drizzle. He looked about to say something -- and so very often now Storm wondered what it might have been -- hesitated, then popped out with, "Let's go back inside."

He faked being caught off guard. He knew exactly where things were headed, and he wasn't about to stop them. "What?"

This time it was Timothy that did the dragging.

"Come on, there's something we should be doing." "What could that possibly be?"

At the front door, Timothy stopped by the bowl of candy. It didn't look as though anyone had been by to take up the offer. Timothy plucked a fun size bar from the bowl. "Chocolate doesn't melt in the cold, hun." 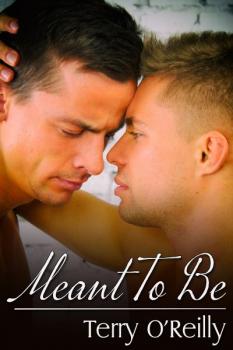 Meant To Be (MM)
Terry O'Reilly
In Shelf
$3.99
Tweets by
sirenbookstrand