When reporter Mona Stewart finds herself on an alien planet, she isn’t terrified. She sees the Pulitzer Prize in her future—if she can survive. Two factions war on the dying planet. One group holds the key to cures for fatal diseases. The other plans to destroy humanity.

The Svarians want to integrate into Earth’s society and share their knowledge. Joining their cause, Mona aids them in their goal by helping them outwit the Torpians. Question is, are the people of Earth ready to learn aliens truly exist? 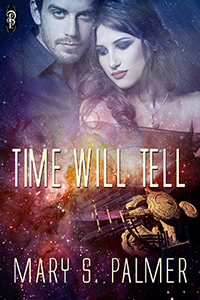 In the heavy rainstorm, Mona’s car skidded, swerved sideways, and spun around three times. As it flew off the road and plunged into the gully below, her body became light, lifting out of the driver’s seat. Fear ripped at her lungs. Oh my God! I’m not wearing my seat belt. Twin headlight beams revealed only darkness in front of her, and air rushed around the car as the engine revved.

The car arced, gravity pulling it down. A wall of gravel filled the windshield, and she clutched the steering wheel. “No, no! Dear God, no!”

The front end of her VW slammed into the ground, the impact catapulting her from her seat. Her head smashed into something…through it…and then she flew into the darkness. Pain engulfed her to the point of madness until, at last, everything stopped.

When she woke, she ached all over. She opened her mouth to yell, “Help, somebody help me!” But no words came out. A heavy weight lay on top of her. She opened her eyes, staring in horror at her little red Volkswagen bug, which pinned her to the ground. Intense pain jabbed at an area near her belly button. Reaching down, she discovered a sharp piece of twisted metal piercing her abdomen. She groaned as she tugged on it, but she didn’t have the strength to pull it out.

Fear gripped her. No houses faced this stretch of the sparsely populated road in west Mobile County, and traffic became light at one a.m. Who would know about her accident? She panicked at the thought no one had heard her earth-shattering screams, the trees snapping, or the crunching metal when her vehicle hit the bottom of the ravine.

Exhaustion overcame her. Mona Stewart lay motionless in a pile of pine straw. Her head swam, and she gasped for breath as life oozed out of her twenty-eight-year-old body.

Remembering her little beagle had been in the car with her, she turned her head to the side. A few feet away, a small, furry body lay in the mud. Her heart squeezed with fear. “P-Pep.” The word came out on a breathy moan. The pup’s ear perked then he lifted his head. Rising onto shaky legs, he staggered to her. Tail low, he sniffed around then crawled under the car, snuggling as close as he could to Mona.

She set her hand on her pup, digging her fingers into his damp white fur. Her eyelids fluttered, and it seemed each breath required a herculean effort. So tired. But at least I’ve got Pep. Not alone.

Behind her lids, lights flashed then melted into images—her parents’ funeral after their death in a plane crash, her marriage and divorce, a couple of dateless years for fear of a failed relationship. The scene of her boyfriend breaking up with her played out in her mind.

“What did you expect?” Lee laughed. “I promised you nothing, and nothing is what you’re getting. There were no commitments.”

Crushed and outraged, she fled her apartment, hopping in her car and speeding away into the humid summer night without fastening her seat belt. She didn’t know or care where she went.