Lame, with harsh features, brooding eyes, a wiry beard crackling with flame, and ropy muscles, the god mortals call Hephaestus is nobody's idea of perfection. Indeed, far from it. A lingering odor of burnt solder clings to him, adding to his manly stench of sweat and musk. His bed is narrow and lonely, his sheets filled with soot and regret.

Blacksmith to Olympus, he hides from his kin on an island in the Mediterranean, commissioned to forge a hero's sword from unbreakable metal. But a brief tryst with a minor water god distracts him. Aean is everything Hephaestus is not -- young, beautiful, sexy. He stirs in Hephaestus a savage lust the smith has never felt before.

Now Hephaestus wants Aean for his own, and he won't rest until the water god is his.

There is a slight current underwater, a tug against his foot, that flickers over his toes and dances along the length of his leg. He stretches his calf, raising it up out of the current, then plunges it back into the flow of the stream running unseen through the pond. Or perhaps it’s a naiad, toying with him, a water nymph looking for a spot of fun.

As if in response, he feels a wet finger drawn across the ball of his foot, tickling him. He kicks out, irritated. “Not tonight,” he growls. His voice is gravelly, unused, as deep and dark as the forge in which he’s been toiling all day.

Those are definitely fingers he feels smoothing up his leg now. He kicks again and covers his eyes with one hand. He doesn’t have to feign his exhaustion -- it’s written in every muscle, every bone. He hears a splash as someone breaks the surface of the water but there is no tell-tale giggle, no girlish laughter, nothing to give away his visitor. Just that hand, now heavy on his knee, and another drifting between his legs. Cool fingers close over the tip of his thick cock, jolting it awake. Pleasure shoots through him like one of Cupid’s arrows, piercing through his fatigue. In an instant, his dick is hard enough to rival the anvil in his forge, and the blood rushing in his ears drowns out all other sound.

So much for a quiet evening alone. Damn.

A hand encircles his shaft, gripping it fiercely. Hephaestus gasps, hips rising off the rock, his body wanting more, no matter how tired he might be. He feels his lame leg pushed aside to part his thighs and the hand lifts his dick as it kneads him, working his erection. He fucks against it, suddenly needful. Cold lips touch his balls but the tongue that licks out to trace his veins is as warm as any mortal’s and Hephaestus melts beneath it. “Yes,” he sighs, aloud this time, hands gripping the rock beneath him for purchase, legs shifting wider apart. That tongue delves deeper, tasting his musky center, and he writhes with delight as his dick throbs in the unseen hand. His voice rises to Olympus, scratchy with desire. “Gods, yes.”

Slowly the nymph climbs onto him. Hephaestus keeps his eyes closed, unwilling to scare his visitor away just yet. These creatures can be skittish at times, and he’s learned the hard way not to spook them when he wants relief. A damp leg presses along the inside thigh of his lame one, and another rests high against the outside of his right hip. Something hard and heavy hangs down against his stomach, rubbing in the furry hair of his abdomen. His cock stabs between the nymph’s legs -- he thrusts up, meeting nothing but air, and a frown crosses his face. Where ...?

The visitor rocks back and Hephaestus feels wet buttocks with his next thrust. Firm like ripe apples and damp from the water below, the ass cheeks part easily around his cock, giving him some much needed friction. He grips the knee closest to him in an attempt to keep the creature close. If he can just roll over quickly, pin the nymph beneath him, thrust inside in one swift move, maybe he can find release tonight.

But a strong hand catches his, and the male voice that purrs in his ear surprises him into opening his eyes. “Oh, no, smithy. You’re mine this evening, not the other way around.” 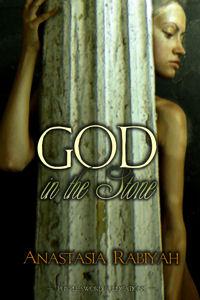 God in the Stone
Anastasia Rabiyah
In Shelf
$3.50