To Love a Traitor (MM)

Wounds of the heart are the hardest to heal.

Solicitor’s clerk George Johnson has a secret goal when he moves into a London boarding house in the winter of 1920: to find out if his fellow lodger, Matthew Connaught, was the wartime traitor who cost George’s adored older brother Hugh his life.

Yet the more he gets to know his quarry, the more George loses sight of his mission -- and his heart. Blessed with boyish good looks and charm in abundance, ad man Matthew is irrepressibly cheerful despite having lost an arm in the Great War -- and soon makes plain his attraction to George.

As George’s feelings for Matthew grow, so does his desperation to know the truth about what happened that day in Ypres. Even if bringing all their secrets to light means he’ll lose the man he’s come to love. 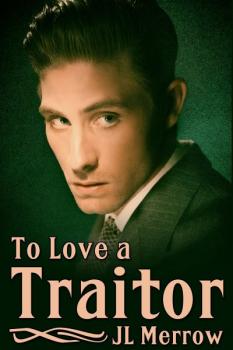 To Love a Traitor (MM)

George stuck his head under his pillow and tried to ignore the noises from next door -- but a vigorous thump on the wall right by his ear, followed by the unmistakeable sound of a sob was too much for him to endure. Matthew might hate him for it, but George just couldn't leave the man in such distress. Flinging off the blankets, he pulled on his dressing gown and padded to Matthew's door in his slippers.

Uncertain whether to knock, George stood on the landing for a moment, irresolute. A further cry from within prompted him to pull himself together and open the door.

He hadn't thought to re-light his candle, but like his own, Matthew's room looked out on the front of the house, and a faint glow from the streetlamps filtered through the curtains. It was enough to make out Matthew's form, writhing in the bedclothes which had wrapped themselves around him like a shroud. "Matthew," George whispered, laying a hand on his shoulder. Matthew started violently. "It's all right," George reassured him. "It's just a dream."

George started to unwind the sheets from the sweating form. It seemed to help -- as Matthew's limbs were freed, the thrashing eased. "Hush," George kept repeating. "It's all right. Just a bad dream."

"George?" Matthew's voice was hoarse. "George, what are you doing here?"

"I heard you cry out. I think you had a nightmare."

"God, George ... I was back there in the dugout, when that wretched shell landed and it collapsed ... Oh Lord -- you don't want to hear about this. I'm sorry, George. Just being a bit of an idiot. Sorry to have woken you."

"You didn't wake me -- I've only just finished studying. Now, will you be all right, or would you like me to stay for a while?"

"I ... Would you mind, awfully, staying for just a little while? I'm being a wretched nuisance, I know."

"Don't be ridiculous," George said a little more sharply than he meant to. "And is there anything else you need?" he asked in a softer tone.

"Do you think you could light the candle? It's on the bedside table, and the matches are in the drawer."

Feeling more than seeing his way, George managed to locate the matches and lit one with a blinding flare that left him blinking for a moment before he could find the candle. Once lit, the candle showed him Matthew's pale face, his hair plastered to his forehead in little curls. He was sitting up, his right pyjama sleeve flopping forlornly where he hadn't bothered to pin it up. George's chest felt curiously tight at the sight of him. "It must be a wretched place to go back to in your dreams," he said.

"Do you know, it's the only time I remember anything about it at all? In my dreams. If it even is a memory and not something my beastly mind has cooked up all by itself."

"Does it happen often?" George asked before he could stop himself.

"Lord, no. Hardly at all, these days. I must have had too much cheese for supper or something," Matthew said with a ghost of a grin. "Or possibly Sherlock Holmes is a little too racy for bedtime reading for one of my advanced years."

"Advanced years?" George asked in a light tone. "You can't be older than twenty-five."

"I can, you know. I'm twenty-five and six -- no, seven months, now." Matthew's smile seemed much more genuine, and his colour was returning.

George felt horribly torn and confused. It was such an intimate situation -- he in his dressing gown, and Matthew in bed not six inches away from him. George knew he should be thinking of a way to use the situation to his advantage, to find out more about Matthew's time in the trenches, but all he felt was a fierce yearning to close the gap between them, to hold his friend tight -- and did he only imagine that Matthew's lips had parted, his eyes half-closed, ready to welcome his embrace ...?

The Strike of Hot Iron
Charlie Richards
In Shelf
$4.99
Tweets by
sirenbookstrand