Tom Fleet was a bit of a misfit as the second son of a minor English noble in the 1880s. Once he finished his schooling he had little to do. His grandfathers had left him adequate finances for his needs and with his elder brother set to take the title, he gave in to his fascination with gadgets and began to tinker and invent. His goal was to create a sky craft to go to the moon. Surely if Jules Verne’s characters could go there and many other places, he could do as well.

Rowan Farrell followed in his Uncle Gordon’s footsteps, joining the UniFleet, but went a step farther and became an officer. Assigned to his first command level post, he takes a small patrol ship out to scout a region of interest to the Council and report if any signs of the enemy Angevirian Empire in the area. When one of his crew spots a strange, tiny craft, he decides to capture and study it. After all it could be an Angevirian Trojan horse. But the odd cylindrical vessel holds only one man, unconscious and suffering from hypothermia and lack of oxygen. When the man comes to, he claims to come from the earth ... five centuries in the past! 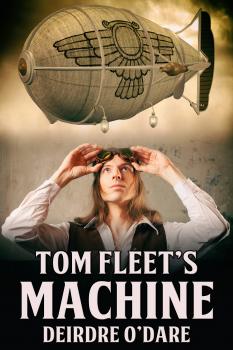 Rowan turned to Tom. “I want to take another look at this machine of yours. I couldn’t make much sense of it while we were trying to get you out of it before you died from exposure.”

From Tom’s smile, which held much of the pride and affection of a new father, he saw the Englishman would be delighted to show off his invention. Leaving Jost again at the controls, they headed down to the lower bay.

As Tom proudly explained his craft’s operation, Rowan felt more confused than enlightened. He had a vague notion of steam power from his classes in physics and the history of the Industrial Revolution but this mass of pipes and wires, gears, levers and such defied his understanding. How the fragile and primitive contraption could have transported Tom through incredible distances of space and time boggled his mind.

“What about this suction pump devise?” He posed the question more to watch Tom’s enthusiasm and listen to his novel accent and speech patterns than anything else. Again as when he’d first mentioned the device in their earlier conversation, Tom blushed.

“You could probably patent such an invention,” Rowan went on. “We do have women in the UniFleet but they’re outnumbered about ten to one and not nearly all the spacers are gay. Such a machine could be a real boon at times.”

Tom nodded although Rowan could see his thoughts had strayed. Finally his keen gaze snapped back to Rowan. “I just had a terrible thought. What if the only way this machine of mine worked was because of the powerful release of physical, mental, and psychic energy?”

Rowan grinned. He couldn’t help it. Tom looked so shocked and distressed he knew he should not take this so lightly but the idea tickled him too much. “Orgasmic energy powered space and time travel, eh? Well, I know they’re experimenting now back at Titan with teleporting and telekinesis which basically harness the energies of the mind to move either yourself or some object. Lots of military uses for that if they can make it work. I suspect those scientists are going to want to talk to you, Tom. You just may have hit on something great here.”

At first Tom’s mouth shaped a shocked “O” but then he too began to grin. “At any rate, I don’t think either of us had better try it right now. Gods only know where we might end up.”

Finally the other man gave a single, short, jerky nod. “You first,” he said. “And just a BJ because that way we don’t have to undress or anything.”

With a shrug, Rowan reached down to unzip the fly of his space suit. “Works for me.” His cock popped through the opening, not the least bit bashful or hesitant.

Tom dropped to his knees in front of Rowan, his face shifting to express eager, avid anticipation. “I haven’t done this since I was away at school,” he confessed, “But I don’t think one forgets how.”

Rowan braced his shoulders against the support of the cradle that held Tom’s craft in a secure lock. He endured the wait while Tom first studied his prick and then slowly reached to wrap one hand around it. The first stroke of that hand felt wonderful but soon the slow rhythm was not enough. “Suck me,” Rowan ordered. “Suck me dry.”