When Dezi Falconi, a pampered rich boy, meets up with Rox Forrester, a savvy trailer trash hottie, sparks fly. Living on opposite sides of the tracks makes them an unlikely couple until Dezi gets a good look at Rox and propositions him. Tired of being used as a rich man’s whore, Rox heatedly refuses the offer, but when Dezi hears his tale of woe, he decides to help Rox financially, and in time they fall deeply in love.

Eventually Nick Falconi, Dezi’s father, finds out about Rox. Nick is a powerful man, used to having anything he wants, and he wants Rox. This puts Rox in the middle of an impossible situation when he learns that Nick holds the strings to Dezi’s money. If Rox doesn’t leave Dezi and become Nick’s whore, he’ll leave Dezi penniless. What should he do? Submit to a dirty old man’s perverted desires, or run away with Dezi and start a new life -- one that includes murder? 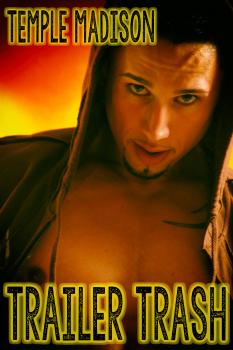 Dezi looked up at him. Suddenly the trailer trash looked big. Too big to handle. With his strong, shapely legs outstretched in a no-nonsense stance, he looked tough and sexy. "Why, you trailer trash, I ought to skin the hide right off your bones."

"And mine is Rox Forrester, not 'trailer trash'!"

"Am I?" Rox said as he straightened himself up to his full height. "By you and what army?"

Dezi's eyes couldn't help but rake along his body, stopping at his crotch that bulged with the promise of a hot and unforgettable fuck. And Dezi was so hungry he could feel his cock getting bigger and bigger at the sizzling thought of a night with this trailer trash. Dezi's gaze reluctantly left his crotch and looked up into his face. He had a head full of hair that was tousled from the wind, making him look tough and virile. It was light, long, and bleached blond by the sun, and he had an athletic build. A deep tan told him he spent a lot of time outside, his chiseled jaw had a five o'clock shadow, and his eyes were an amazing sea green. His lips were full, but they were unsmiling.

If only I could get him to smile. What a picture he would be.

When the trailer trash spoke, his voice was throaty and sultry, but when he was upset, it was thunderous. What would the trailer trash do if he told his dad? He'd go, all right, but all of a sudden Dezi didn't like that idea too much because if he did, Dezi would never see him again. So why did he have to leave? He didn't have to tell his dad that Rox was here. If he played his cards right, Rox could be his little secret -- his dirty little secret.

"It's no skin off my nose if you stay here. My father's, either. You haven't done any damage to the property. The trailer is kind of an eyesore, but you could fix it up."

Rox stared at him. "What are you saying, rich boy?"

"I'd even help you fix it up. In fact, if things work out the way I want them to, I could even pay you."

Dezi stared at him for a moment, his eyes taking on a lazy, sultry gaze as he slid them down his body, and then up again, stopping at his flesh-colored lips that he was dying to taste.

Rox had seen that look before, and hesitated for a moment "Why, you bastard. Are you propositioning me?"

"Why not?" Dezi said, looking at him as if he were dirt. "It's not as if you couldn't use the money. You're trailer trash, aren't you?"

A full chest of anger blossomed inside Rox, making him automatically clench his fist, reach out and grab Rich Boy's collar, and draw his fist back to hit him.

What the rich boy didn't see was the rush of tears that misted Rox's eyes. He'd heard slurs like that one too many times, and trying to fight it was like trying to stop a hurricane. To keep Dezi from seeing his tears, he pushed him away, turned, sat down on the bed, and hung his head. "I guess I can't blame you. It seems I'll never be anything else."

"What's wrong?" Rox mumbled with a derisive chuckle. "You've just propositioned me and called me trailer trash for the umpteenth time, and now you want to know what's wrong? What turnip truck did you just fall off of? Get the hell out of here, 'rich boy' before I really lose my temper."