There’s a long waiting list for life saving transplants. How are so many organs suddenly becoming available, especially for wealthy patients out on Solus? Something isn’t right there and questions begin to arise. After a friend of a friend is killed, Galactic P.I. Majestic Kane is determined to find out why. 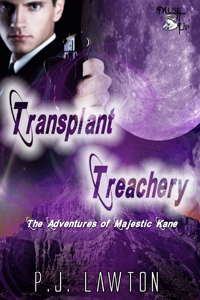 Kane’s short shuttle jump landed just after nine-twenty a.m. local time. He rented a scooter and made it to the Space Time Motel with about five minutes to spare.

Before walking to the reserved room, he cased the foyer in an attempt to ease his nagging feeling something wasn’t quite right.

The hackles on the back of his neck had risen, and he always trusted his instinct. But since he couldn’t see anything out of the ordinary, he went to find Moore.

Kane knew the room was number three-fifteen. He’d purposely booked that one at the rear of the hotel, with the excuse he didn’t like street noise.

Actually, he figured Moore would be a little more at ease and inclined to talk if he felt safer. Kane sprang up the three flights of stairs, as best he could, and then slowly walked toward the room. The door was slightly ajar. A sudden cold chill ran down his spine and he hesitated before making his presence known, especially since he was not armed. He gently pushed the door fully open with the toe of his shoe.

Bile rose in the back of his throat as the coppery smell of fresh blood and other unpleasant odors assailed his nostrils. A quick peek around the doorframe showed only one person in the room. Moore was slumped over in the hard motel room chair, stone cold dead.

The man’s nose was broken and pushed to the side, both eyes were swollen shut, and his shirtfront was stained with congealed blood. His mouth hung open, and Kane got a feeling he’d probably lost a couple of teeth.

Kane didn’t know whether they’d got what they were after, but when they were through with him, they’d simply shot him. They’d placed the barrel of a laser pistol flush with his left temple, and blew out the other side of his head. Gore and brains were splattered over a wide area. Sometime during the process, Moore’s bladder and bowels voided.

Just to make sure, Kane took out his handkerchief and gently removed the wallet from the dead man’s inside jacket pocket. Yes, it was Moore.

Kane didn’t waste time looking for the disk Moore had said he would provide. The fellows who took him out would have been professional enough to make sure nothing incriminating was left behind. Kane remembered Moore had mentioned cartels.

He’d heard the Solus underworld included some drug cartels. It was news to him that cartel folks were into organ smuggling, but money talked, and to them it was simply diversifying.

Making sure to wipe anything he might have touched, he left the room, walking nonchalantly across the foyer and calmly biding the receptionist goodbye. He shot all the red lights to the Spaceport.

Unfortunately, he had an hour to kill before the first available flight so he made his way to the bar for a cold syn-beer. He hoped it would settle the nausea threatening to trigger off a major attack of stomach migraine, as tended to happen when he was stressed out. Kane was a tough guy and all, but the sight of scrambled brains could still get to him a little. He considered himself lucky; they could have waited for him to arrive.

With hindsight, he realized it wasn’t the brightest move he could have made. Rivulets of sweat ran down his face as he reached for his drink.

He’d only taken one sip of beer when a Breaking News notice flashed across the bar video screen. Had someone found Moore? As it turned out, the actual newscast was even more remarkable.
About the time he had dropped in on the late Mr. Moore, someone had firebombed the office of Life Flight, Inc. The entire structure was completely destroyed. Kane presumed the cartel needed to tie up some loose ends. He would have to wrack his brains some more on his way home.