The memory of this party could haunt him forever ...

Dragged along to a haunted house by his mates, Sam’s at the Halloween party from hell -- the guy he fancied has turned out to be a bigot, and Sam has just outed himself to his whole football team.

Escaping to the garden, he meets James, an enigmatic stranger with a mischievous smile, and the evening soon takes a turn for the better. The night may be chilly but the heat between Sam and James is hotter than Hades.

But James has a role to play in the evening’s ghostly entertainment, and it’s a story with a deadly ending. Unless Sam can change the script and stop history repeating itself, “till death do us part” will come sooner than he thinks. 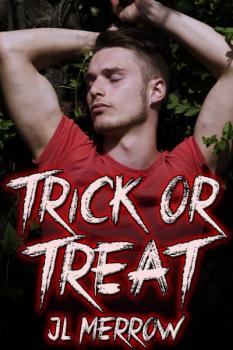 Sam sighed and leaned back against a tree trunk, remembering to check first that it wasn’t the one he’d just been pissing against. “I had a bit of a disagreement with one of the blokes I came with, and it ended up with me walking out before I decked the bastard. Thought I’d try ringing for a taxi or something, but my phone’s dead. Getting into the spirit of Halloween, I suppose.”

An odd look passed over James’s face, as if he hadn’t quite understood what Sam had said and it was worrying him, somehow. Then he seemed to pull himself together. “So you’re stuck out here? What a bore.”

“Well, I wouldn’t have put it quite that way, but, er, yeah. Don’t suppose you could give me a lift back to the nearest town?”

“Shite. Could I use your phone, then?”

There was a pause. “I’m afraid I can’t help you there either. Sorry.”

“S’pose I’ll have to go back inside and borrow someone else’s,” Sam said with resignation. “Still, no hurry.” He grinned and reached into the pocket of his leather jacket, pulling out a half-bottle of Stolichnaya vodka. “Not 'til this runs out, anyway.” Sam took a swig, wiped the neck on his sleeve and held the bottle out.

James looked a bit startled but accepted it all the same. “Vodka? I don’t usually drink it neat. Or from the bottle, for that matter.”

“Well, if I’d known I’d have company I’d have half-inched some tonic and a couple of glasses.”

James looked blank for a moment, then his face cleared. “Oh, rhyming slang. Pinched. I suppose I have heard it before.” He grinned. “Although not usually in polite company.”

Sam returned his grin. “You were after polite company, were you? Right, I’d better bugger off, then.”

“I’d rather you didn’t. I should be reduced to trying to hold a conversation with the squirrels, and I suspect they all went to bed hours ago.” James took a respectable swig from the vodka bottle and handed it back. As he did so, their fingers brushed, and his eyes met Sam’s with a hint of a challenge -- or a promise. “Besides, the present company is far more to my taste.”

“So who are you here with?” Sam asked, trying to sound casual. “No offence, but you don’t seem the sort to hang around with any of those wankers in there.”

James gave him a quizzical look. “I’m not entirely sure what possible offence I might take from a statement like that. Or do you suppose my ears too delicate for your delightfully descriptive turns of phrase?”

“Well, you do look a bit delicate,” Sam teased. “Quite pretty, really.” He held his breath, hoping he hadn’t judged this wrong.

James cocked his head on one side. “Well, as it happens, you wouldn’t be the first to say that,” he said softly. He grinned again, suddenly full of mischief once more. The sight did weird things to Sam’s insides. Good weird things. “Although I’d value the compliment more were we a little better illuminated,” James added.

“Nah, I don’t think we really need any more light, do you?” Sam pushed off the tree trunk and stepped closer to his companion. “Wouldn’t want anyone to see what we were up to, would we?”

“Oh? And what might that be?” James teased, his face tilted up toward Sam, half lit and half in shadow.

Like the moon, Sam thought, and wondered just how much he’d had to drink even as he leaned down for a kiss.

James’s lips were cool and inviting. Sam could taste the vodka he’d just knocked back, the faint kick of it lingering on his tongue. James’s face under Sam’s hands felt impossibly smooth and flawless, and Sam was guiltily reminded that he hadn’t bothered to shave this evening. The arms around his waist were once again surprisingly strong, pulling him close, crushing their chests and their hips together.