Brock has fantasized about men his whole life, but he loves women too—especially Yasmine, his wife. After a tell-all game of truth or dare, he admits the one deep, dark secret he’s never revealed to the love of his life. Months later they wind up at Inferno with Jeremy, the couple’s best friend.

The evening meant to fulfill Brock’s yearnings quickly becomes a night of adventure for all three, with a lot more love laid on the line than any of them could have imagined.

Brock Duncan squeezed his wife’s hand as they entered Inferno that Friday night. His nerves were shot, his hands clammy, and his stomach was even a little queasy. “You sure about this, babe?”

Yasmine, his gorgeous, loving wife, gave him one of those smiles that after eight years of marriage still melted his insides. “I am, but are you?”

They sidled up to the bar, and Brock ordered a white wine for Yasmine and a double shot of Crown for himself. The bartender brought their drinks in an instant, and Brock paid and left him a nice tip. After handing the wine glass to his wife, he downed half his whiskey in one gulp. Yes, he was ready. He just hadn’t been this nervous since his first time in the back of his dad’s pickup truck with Jodi White his sophomore year of high school.

Yasmine laid her hand on his chest and her head on his shoulder. “I love you, Brock. This is for you, and if you don’t want—”

“I do.” He breathed deep the soft floral scent of her perfume and wound his free arm around her waist. “I am ready. I want this.”

She tipped her head back and grinned.

A simple game of Truth or Dare a year ago culminated into this night. When Yasmine asked him for the deepest, darkest secret he’d never shared with her, he’d feared the answer would shake their marriage. It hadn’t. She’d been intrigued by his answer. Turned on by it, in fact, which had surprised him. A couple of months later, after a hot night at Inferno where they’d spent the evening in one of the voyeur rooms watching a triad, she’d made an offer he hadn’t been prepared to take her up on just then.

She told him, if he wanted it badly enough, she’d be willing to invite another man into their bed—a man for him.

Their best friend was a guy they’d met a few years ago right here in Inferno, and he happened to be bisexual. One night after a few too many beers and too much sun, Yasmine told Jeremy about Brock’s fantasy. Jeremy had offered to be the one to…pop his cherry.

Brock kissed his wife now, softly, gently, letting her know how much he loved her, cherished her. Tonight was about sex. They’d come to Inferno a few times a month for several years. They liked to play and get kinky. But when they were at Inferno, they often pretended to be strangers. Sex for the sake of sex. Something they’d never experienced in their relationship. So they’d agreed to meet Jeremy here, where friendship could be suspended and fantasy could live on its own. Tonight they were three individuals, not a husband, wife, and another man.

When Yasmine pulled back, she gave him a small peck on the tip of his nose. “Jerry just came in.” She tipped her chin in the direction of the door.

Brock turned his head to see Jeremy Dorst standing in the doorway to the club. He grinned when he spotted them and headed their way across the semi-crowded main hall, where dancers ground their bodies into each other mimicking the sex acts they would most likely participate in later.

Damn, he was a good-looking man, Brock thought, had always thought. But he would never have said anything if Yasmine hadn’t blurted out that he wanted to fuck and get fucked by a guy, and that she was dying to watch it happen.

“Hey, guys,” he said, giving Yasmine a kiss on the cheek. He smiled at Brock in a way he never had before. There was lust in his light hazel eyes, a sparkle of…something. Jeremy laid his hand against Brock’s back and flexed his fingers a bit. “How’s it going?”

Tingles raced down Brock’s spine from the point of contact and seemed to settle in his balls. Jerry’s cologne was subtle and musky. His light brown hair was a tad too long, curling slightly around the collar of his pale blue button-up shirt that was now open at the collar. Jerry was a real estate agent and often looked too polished for what Brock knew him to be. One kinky bastard who liked both men and women and often had several partners of each sex at once. If some of his snooty, penthouse clients knew the real him…

“Earth to Brock,” he said jokingly. “You in there?”

Brock blew out a breath and chuckled. “Hey.”

Brock had reserved the room Jeremy had instructed, and now they entered. Unlike a lot of the rooms in Inferno, this one wasn’t painted all black for the dungeon effect. This particular room was the epitome of a luxurious fantasy. A California king bed draped in beige satin sheets with a canopy of netting held up by intricately carved wrought iron bars. Sweet-smelling candles flickered from what looked like a hundred sconces and candelabras around the room, and one wall was painted with such a realistic nighttime beach scene, full moon and sparkling waves, it seemed as if one could step right off the balcony and onto the sand.

Jeremy set his glass on the nightstand and turned toward Brock and Yasmine. “There’s no need to be nervous. We’re not doing anything you two don’t want to do.”

Yasmine pulled away from Brock and held up her hands. “I’m not doing anything at all but watching.” She gave a slightly shaky laugh that did nothing for Brock’s nerves.

Jeremy nodded but muttered, “We’ll see about that. Finish your drink, B, and try to relax. You’ve done what I told you to do this week?”

Brock gulped the last of his whiskey and wished he had more. “Yeah, I have.” In order for things to go smoothly, Jeremy had suggested he get a butt plug and use it to help stretch his sphincter so his first time having a dick in his ass didn’t hurt. Yasmine had been a real champion though, he thought with a wicked grin. She’d offered to get one for herself. Damn, the sex had been hot the last couple of days.

Jeremy took the four steps separating them, removed the empty glass from his hand, and held it out for Yasmine. She took it and moved off, just out of Brock’s line of sight.

Without warning, Jeremy wrapped his hand behind Brock’s neck and crushed his mouth against Brock’s. Brock’s breath caught, and his first reaction was to shove him away. He even raised his hands to Jerry’s shoulders to do just that when he realized this was something he wanted. He’d fantasized about kissing men for longer than he could remember, but he loved women, too. And women were so much more socially acceptable.

As soon as he let himself relax, the sensation of Jerry’s mouth sank into his brain, and his dick throbbed to fullness in an instant. Soft lips, prickly five o’clock whiskers.

“Breathe,” Jerry whispered against his lips.

Brock laughed, his breath rushing out of him. Jerry took the opportunity to stroke his tongue into Brock’s mouth, and Brock groaned. He gripped Jerry’s shoulders, then let his hands slide down over well-formed pecs and a hard abdomen. He smelled good, tasted of coffee, vodka and lime. He tipped his head slightly and touched the tip of his tongue to Jerry’s.

Jerry sighed and opened his mouth so their tongues touched, played, dueled, and before he knew it, Brock had Jerry in an embrace, their chests pressed together, cocks rubbing against each other through layers of denim. It felt good, exciting, taboo. So different from his small wife who he always felt a little afraid he’d break if he let go and gave his animalistic side free rein.

They fit together almost perfectly. Of a same height, weight, and build. They’d met one night when Inferno had been unusually quiet and Jeremy had offered to buy them a drink to celebrate a large land deal he’d made a nice commission on. They both loved to fish, and so the friendship had been born.

Don’t think of friendship. Brock shoved the thoughts away because he wasn’t sure he could let his best buddy fuck him. Tonight they were strangers. This was a one-time thing. They all knew it, had discussed it. One time to scratch the itch.

Brock turned Jeremy and practically threw him down on the bed, coming down on top of him and ripping at his shirt buttons.

“Whoa, there,” Jeremy said as he shoved Brock off of him and leaned up on his elbow, his eyes sparkling and his grin showing his amusement. “Take it easy. We’re in no rush. We’ve got the room for as long as we need it.”

Brock panted, licked his lips, and panted some more. He’d seen Jeremy with his shirt off countless times when they’d been out on the boat, and therefore he knew just how fucking sexy he was. “Let’s just do it.”

Jeremy’s expression changed from teasing to something softer, a look Brock didn’t see very often. Serious Jeremy. “We’ll do it, but we’re going to do it right by you.” He touched Brock’s cheek in a way Yasmine often did. “This is your fantasy.”

Brock glanced toward his wife who sat in a wingback chair a few feet from the bed. She gave him a soft smile and nodded. “It is my fantasy. I want it all.”

Jeremy laughed. “As you wish.” He stood up and started unbuttoning his shirt, exposing his rippling muscles and soft brown chest hair.

As Jeremy slid his shirt off his shoulders and dropped it on the floor, Brock turned his attention to his wife. She stared at Jeremy with rapt attention, and another shot of lust spiked through him. What would it be like to watch Jeremy fuck her? The outfit she had on was one he’d bought for her last Valentine’s. The stiletto-heeled boots were thigh-high, but no one would know because the white skirt was full and fell to her shins. He knew she had no panties on, because she never wore panties with her skirts. The top was crocheted and showed more than it hid. Only the skimpy lace bra beneath kept it somewhat modest. Against her dark, Latino complexion, the white outfit made her skin glow with a bronze luster that made his mouth water to taste her.

Brock’s attention was pulled back to Jeremy when he heard his zipper. Jerry lowered his jeans, his underwear going with them, and his cock sprang free, half erect and gorgeous. Brock’s fingers itched to touch, and he scooted toward the edge of the bed with that thought in mind, but Jeremy stepped out of reach with a teasing, “Ah, ah, ah. Not yet. Sit up.”

Brock sat up on the edge of the bed, and then went a little lightheaded when Jeremy kneeled on the plush maroon rug at his feet and reached for Brock’s waistband. With quick efficiency—Brock realized how fast and easy it was for another guy to get jeans unbuttoned and zipped opposed to a woman doing it—Jerry opened Brock’s pants and carefully reached inside to draw out his cock. His wasn’t just half hard. He was rock solid. 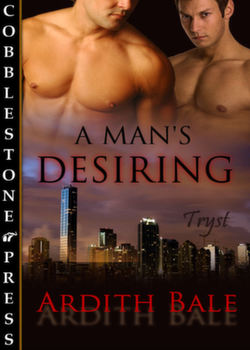 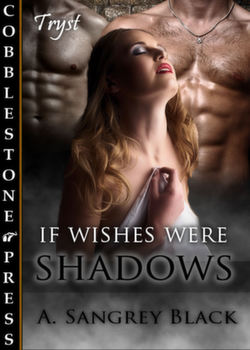 If Wishes Were Shadows
A. Sangrey Black
In Shelf
$3.99