When Steve Detroit goes to a swanky Bahamas resort in search of a cheating spouse, he uncovers a lot more than he bargained for. Sexy hostess Jessamine Valentine stirs a fiery passion in him that threatens to distract him from his mission and swallow his heart whole.

Jessamine could care less about the paranormally-enhanced eroticism all around the island hotel where she works. Then a guest with smoldering emerald eyes awakens a need she has tried hard to forget.

Steve soon discovers Jessamine holds the key to finding his quarry, and unlocks the most intimate secrets of the island beauty, as well as the resort itself--top-floor mysteries kept hidden from mortals. But when one of those secrets threatens to separate them permanently, how will Steve find a way to keep their love alive? 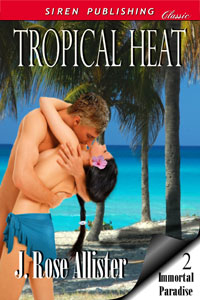 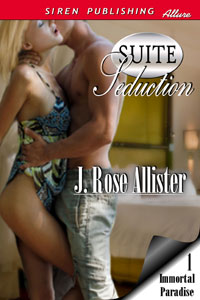 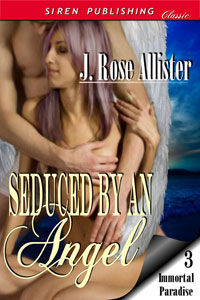 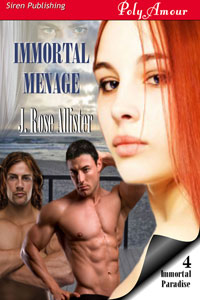 He turned his head as he spoke, the last words whispered so close to her lips that her stomach flipped itself over. Oh, god. Even in the dark the man’s eyes glittered in a lose-your-mind shade of green, and that was just what she did. His lips, muscles, the feel of his cock pressed at the junction between her thighs now that she’d tiptoed up—she couldn’t help herself. An inch, maybe two, was all she had to lean in for their lips to brush.

He stiffened in shock when her mouth touched his. His groan was immediate and not quite in keeping with his wish for silence. A hand snaked into her hair as her body sizzled to life. The flood of want he unleashed in her was maddening. She deepened the kiss until her breasts were pressed tight against the silken hair on his chest. His tongue sought hers first, teasing along her lips to prod them into parting for him. This she did willingly, and the taste of him tightened her nipples with a delicious tingle. Rubbing them back and forth against his chest heightened her longing, and then his hands took charge and kneaded them until she was breathless.

The feel of his hands on her fired her own need to explore. No longer willing to idly wonder about the massive bulk inside his trousers, she slid a hand along his narrow waist and taut stomach to find the front of him. He was stiff and throbbing beneath the cotton fabric of his pants. Steve’s breaths were ragged when he pulled away from her lips long enough to croak out a noble, if not weak protest. “This is your last chance,” he said in a taut whisper, “to avoid being robbed of your virtue in a dark closet.”

God, his cock felt so thick, though blocked by far too much fabric for her taste. “Guess I don’t find virtue to be much of a virtue,” she whispered, shocked at her own boldness. She began rubbing him in long, pointed strokes that left no need for further discussion.

With a rough growl, one of his hands reached behind her thigh to lift and spread her for him while the other found its way beneath her short skirt. The first stroke of his fingers against her hot wetness sent a shock of delight straight through her core, and she stayed upright only because Steve was still supporting her against the wall. He pushed aside the negligible scrap of fabric shielding her from his possession. His head bent to her nipple while two fingers breached deep into her hot flesh, and with one stroke of his thumb on her clit, she was gone. An explosion splintered mindless pleasure into a thousand ecstatic sensations all at once. She clamped down on her own cry, biting down until the need to release a scream with his name attached began to lessen with the receding tide of her orgasm.

Steve released her thigh and dropped to his knees before her. One hand slid up to draw maddening circles around each nipple, the other parted her labia so his tongue could take her soaring to new heights. Hot delight lapped at the tight bud of flesh still throbbing with a release that impossibly seemed to be building again. The only dilemma in this scenario—aside from not being free to scream in delight—was that his cock was now several feet lower than she wanted it. His position robbed her of any part of him aside from raking her fingers through his thick hair.

Shoving his head back from between her thighs, she bent down until her ass was pressed to the wall and her bare breasts hung free near his face. “Time for the good guy to lose his virtue.”

Pulling him to his feet—not that he fought very hard—Jessamine made quick work of his fly and slacks. He pushed her thigh up and lifted her on the wall so he could position his cock at her entrance. His mouth found hers as he pushed into her with one long, powerful thrust, sending a guttural moan out of her throat against his lips.

Sweet gods of passion. He surpassed her wildest vision of his girth, filling her in places she never knew a man could. Muscled arms supported her while he thrust over and over, until fevered perspiration and gasps and animal moans turned their lovemaking into a primal ritual. His spicy lime scent mingled with their musky sex, driving her lips to seek out every inch of broad shoulders and chest she could find. When her muscles gripped his erection in warning of another impending explosion, he swore under his breath, hoisted her until she wrapped both legs around him, and drove himself to the very depths of her soul.

“God, Jessamine,” he said through gritted teeth. “What have you done to me?” 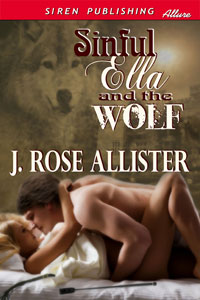 Sinful Ella and the Wolf
J. Rose Allister
In Shelf
$3.99 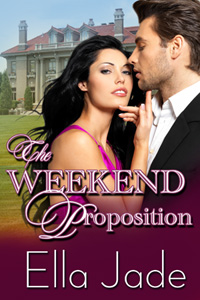