AUSTRALIAN FOOTBALL - What the hell kind of crazy-ass pick-up football game are the guys in the park playing? David leaps into the middle of the sweaty, hunky, hard-driving bunch and finds he's got to hustle to keep from wiping out on the field and off. BASKETBALL - Danny gets an unbelievable chance to hit on the new freshman basketball star, thanks to the kid's sister and his adoring fans. But he blows it. Given a second chance, will he be able to man up and go after what he wants? SPECTATOR SPORTS - While watching the Olympics on TV, four buddies get into a discussion of the assets of the male athletes that leads to one of the young dudes challenging whether they are going to talk the talk or walk the walk. Good question. RACQUETBALL - Stiffed by a self-centered, smug racquetball player at the local club, an annoyed player decides to show the shit-head there's more to life than slamming a ball against the wall. FOOTBALL -Tank, star linebacker of his college team, is discovered by his roommates to be having a blistering hot sex dream. Will the quarterback run interference at his embarrassment? Or will his roomies prove to be understanding teammates? Four guesses. WRESTLING - The kid wants to be a pro wrestler. His dad gets a chance to put him in front of his TV hero. The kid is hot and horny. What's a big star who's used to having his way to do? 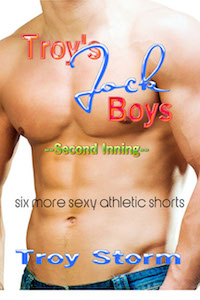 He couldn't figure what the hell the guys were playing. While some of the men were dressed in brief shorts and T-shirts, obviously prepared for what was a very rough and tumble sport, some of the others seemed to be playing in whatever outfit they happened to be wearing to the park that afternoon.
It must be a pick-up game, David thought. They seemed to be letting anybody join. But what the hell was it? It looked like a cross between rugby and soccer played with a shrunken football.
Whatever it was, it was fast and furious and the guys were sure as hell having a great time. And whatever it was, David wanted to be a part of it.
""Sure, get your ass in here. You're gonna get creamed, though,"" one of the sweat-covered guys on the field yelled at him with a good natured grin.
""Whose side am I on?"" David yelled back, running onto the field. ""Mine,"" the guy answered, giving David a quick once over. ""We got fresh meat,"" he yelled to his other team members. Pointing out the men to David, he threw some quick rules at him before play resumed and the new recruit found himself chasing madly after a fast-moving ball, surrounding by sweat-drenched, dirt-stained, yelling players.
Adrenalin surged in his veins. ""No tackling, keep the ball moving, no kicking,"" the team leader yelled. ""Everything else goes."" The men seemed to be grabbing at whatever they could get their hands on to bring the ball carrier down.
Guys slammed into each other, bodies toppled into the dirt and scrambled up to keep going, the ball ended up in David's hands and he ran like hell before getting plowed under in a pile-up of perspiring, laughing, foul-mouthed teammates, whose pumped, pulse-pounding muscles pressed into his face and smashed against his equally pumped body.
Testosterone shot through his veins, heading straight for his loins.
""It's Australian Football—Footy,"" one of the guys breathlessly told him during a quick break called to let everybody catch their breath.
""Or at least our version of it,"" laughed the man who had said David was on his team. 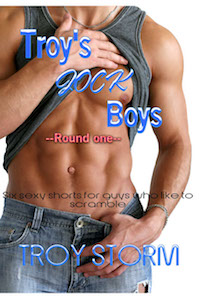 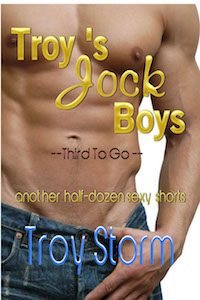