Truck Me Back To Normal (MM)

Joseph "Joey" Choi has been to hell and back. A war veteran, he was in a bad place for a long time until his brother Derrick got him the help he needed. Joey figures the least he can do is learn how to do things on his own, for a change. His first step is to apply for a job at a farm.

Barrimore "Bear" Lancett, the farm’s foreman, is larger than life and seriously hot. And God, those dimples! Both Bear and Joey a "moment," but Joey immediately pushes the wayward, intimate thoughts aside, convinced he's not relationship material, much less with his boss.

That doesn’t stop Bear from trying, but he has to convince Joey to take a chance on them, and maybe find his new normal.

Truck Me Back To Normal (MM)

Meg showed me what to do and we slipped into an easy rhythm, moving around each other. She demonstrated what to do for the pies, and I helped prepare the chicken, beef, and pork. Pretty soon I was manning the barbecue grill, getting lunch ready for the staff since she was swamped otherwise.

I set the table out back with food and stoked the charcoal while everyone ate. I nibbled on a chicken leg in between tasks. Bear didn’t turn up until everyone else had gone. That might have been deliberate on his part but was bad news for me. He stalked over to where I was and stood before me, hands on his hips.

“What do I have to do to convince you to give us a try?” He was sweaty and luscious, and I really needed to quit thinking like that.

“I can’t be what you want, Bear. You saw what happened the other night. I wouldn’t wish that on anyone. It wouldn’t be fair to you to --”

He cut me off. “Bullshit! You’re scared shitless, and I know for a fact they don’t let cowards into the army.”

Oh, now he’d done it. I threw the tongs on a plate and stomped around the grill to stare him down, which was difficult to do since he was way taller than me. “What the fuck gives you the right to talk to me like that?”

Bear threw his arms in the air. “How else am I supposed to get your fucking attention?”

“Try acting like a civilized human being, for one.”

He poked me in the chest. “Pussy.”

I lost it. I punched Bear in the jaw, and it felt like I’d hit a rock. He didn’t even stagger, and his head barely moved. My knuckles throbbed. Infuriated, I tackled him to the ground, using my fists but hardly landing any hits as we rolled around, grass and dirt getting everywhere as we cursed at each other.

Then, as suddenly as it happened, I stopped. What was I doing? Jesus. I pushed off Bear’s chest, trying to ignore the fact that my dick was hard -- his, too -- and walked away as fast as my legs could carry me. The bunkhouse had never seemed so far before, but I finally made it inside and locked myself in.

I slumped against the wood, panting hard with my eyes tightly closed as mortification suffused me, body and soul. What the hell had I just done? Did I just have a fight with my boss? Man, this whole thing was fucked up. Before I could decide what to do next, someone tried to get inside, but since I’d bolted the door, pounding began.

Worn out, I turned and leaned my head against the peeling paint. “I don’t think that’s a good idea, Bear.”

“We either talk it out now, or it’ll happen in front of witnesses. You want that? Really?”

I opened the door and rested against the doorjamb. I was sure I looked a sight, and the spot I’d punched on Bear’s face was turning purple. Wonderful. “Talk.”

“Joey, I get that you’re worried about being relationship material for ... well, anyone. But you have to try sometime, right? I’m okay with it being fucking around to start with, if that’s what you need. I’m happy to go at whatever pace you want, in fact, as long as you don’t shut me out. Can’t we at least try to be friends? You need a friend, don’t you?”

He lifted a finger and pressed it against my lips. “I don’t, either. But maybe we can find out together, huh?” And then he slowly pulled my traitorously willing body to his, and right there on a hot afternoon, with dirt on our clothes and grass in our hair, Bear kissed me, and I was lost. 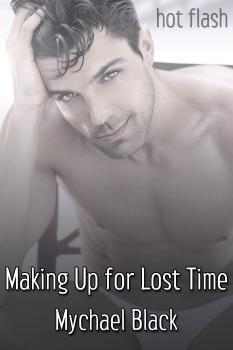 Making Up for Lost Time (MM)
Mychael Black
In Shelf
$0.99

Once Upon A Wolf
Hurri Cosmo
In Shelf
$3.99
Tweets by
sirenbookstrand