True to Her Heart (MFM)

Heat Rating: Sextreme
Word Count: 44,225
4 Ratings (4.5)
Contemporary Menage a Trois/Quatre
[Ménage Amour: Erotic Ménage a Trois Romance, M/F/M, voyeurism, public exhibition, HEA]
Everyone in her hometown knows that Molly Evain is shy. As a librarian she relates to books better than to people. Quiet, reserved, demure...all words people use to describe her, including her boyfriend. But when he pops the big question, Molly realizes she doesn't want to be those adjectives anymore. What she doesn't know is if she's able to change since she suffers from panic attacks and agoraphobia. In order to give herself time before answering, she decides to take an impromptu vacation to Paris.
A chance encounter puts her in the path of not one, but two handsome men. Rookery Jones is a hockey heartthrob, on vacation to find relaxation and anonymity in Europe. Shane Gordon is the man she is having a voyeuristic romance with through her hotel window. When she realizes both men are best friends and she’s whisked to the French countryside, Rookery and Shane come to terms that they are both falling for the same girl.
But their lives are disrupted by the media attention of their relationship, and Molly doesn’t know if she’s strong enough to handle the attention and publicity. Does she run away, knowing that if she does, she could lose both the men she’s come to love?
A Siren Erotic Romance 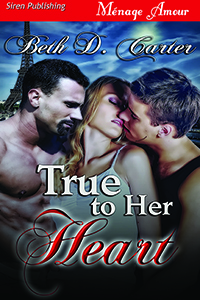 True to Her Heart (MFM)

This man was simply gorgeous. His dark eyes reminded her of melting chocolate, slightly oval in shape with lashes any girl would envy. His thick brown hair was slightly long but styled in a messy-controlled way. And two dimples appeared whenever he smiled. Sin was the word that came to mind when one looked at him, the type of looks that would make women follow him and jump off a bridge if he told them to.

He nodded. “Born and raised, believe it or not. It’s hard to find native Angelosians. Everyone is usually from somewhere else, moving there because of the whole Hollywood scenario.”

“Mmm, I don’t watch too many films. I like books instead.”

He glanced over face. “Yes, you seem like you would. I can picture you curled up in a big chair, a comforter wrapped around you and steaming cup of hot chocolate next to you as you read…hmm, I’d say, the classics? Am I right?”

She smiled. “The classics? Well, I do have my favorites but if I’m going to be in a big chair with a comforter and hot chocolate it’s going to be a juicy romance novel. Leave the classics for the literary group.”

He threw back his head and laughed again, not even aware of the stares everyone threw his way, as if surprised to hear a human voice above a whisper. But Molly was aware. She was more than aware, and just as easily as her shyness had evaporated it returned with a nasty sting. She lowered her eyes, half turning her head away from the staring people.

Her gaze wandered to his feet. He was wearing sandals with a pair of Capri style pants and she rather thought he had the sexiest feet and calves she’d ever seen on a man. Very muscular without being vulgar, not too hairy with…hmm, were his toenails manicured?

“What’s the matter?” he asked, forcing her to look at back at him. A small, concerned frown appeared between his eyes. “You know, I don’t know your name.”

“Molly,” she replied softly, holding out her hand. “Molly Evain.”

He took her hand, held it, squeezing her fingers slightly, not bothering to let it go. “Molly,” he repeated. “It fits you. My name is…Jones.”

Her eyebrow lifted. “Is that your first or last name?”

He gave her a crooked smiled. “You know some women decorate their kitchens with whatever animal they like? Cats, or cows or chickens?” Molly nodded, cocking her head slightly in confusion. “Well, my mother had a passion for ornithology.”

“My first name is Rookery.”

“It’s not that I don’t like my first name, but as a kid it was hard growing up named after a breeding ground for birds and with a dad who…worked a lot.”

There had been no hint of recognition in Molly’s beautiful eyes to his name, and for a little while longer he wanted to keep his anonymity. It was an unusual feeling. All the women he had dated over the years had known exactly who he was and had used that, used him, for one reason or another. He had to admit, he wasn’t a saint, had used the women as well, but when the relationship had ended a bitter taste had always remained left behind. He was just now realizing, as he moved into his thirties, how unfulfilling the meaningless sex truly was.

His heart had never raced out of control, his eyes had never remained glued, his skin had never tingled. Not like it all was doing now just from holding the hand of Molly Evain.

She ignored the little voice in the back of her mind warning that she was playing with a fire that was getting a little too hot for her. But she couldn’t help her eyes traveling over every inch of his hard, muscled body. He uncrossed his arms and she saw the nipple rings twinkling up at her. A rush of sexual want flooded through her, making her panties even wetter than ever.

How could just looking at him make her do that?

The question became moot when he held up one finger, telling her to wait. And boy, did she wait with bated breath. What was he going to do? Every nerve ending in her body was standing in breathless anticipation.

And then he ran one hand down his chest, fingers pointing down to his groin, like he was recreating a moment from Magic Mike. The saliva in her mouth dried up and disappeared as she watched that strong hand travel over firm pecs, beaded nipples, and a six-pack abdomen. When he reached the waist band of his pants, she saw the considerable bulge behind the fly and she nearly fainted. Her palms slapped against the window pane, wishing the glass would disappear and a magic bridge could take her right into his bathroom.

His hand gripped the bulge and his hips bucked.

And then he teasingly began to undress. Was this really happening? To her?

The button came undone and he pulled the material, the zipper sliding down to reveal that he wore no underwear. It was just more hot, tanned skin as he turned to give her his ass, pushing the pants slowly down.

His tight butt had been sculptured by angels because it was so heavenly. Nice, round, firm, she saw the tattoo on his hip curled around to incorporate most of the cheek. It made her want to lick it, to trace the design with her tongue and maybe not stop until she swallowed him down. She’d never been a blow job type of girl but with this man all she pictured was her on her knees in front of him.

Turn around, damn it!

Her body literally throbbed. Her clit throbbed. Her heart throbbed. Even her blood throbbed through her veins. She wanted to touch herself so bad. Would it be wrong to pleasure herself while watching him pleasure himself? Somewhere all the lines of what was right and wrong blurred and her brain screamed at her to do it, slide her hand into her pants and rub herself until she climaxed.

And then she realized while she was arguing with her brain her hand had already done it. She lightly touched her clit and her body arched as mind-numbing desire speared through her.

She watched as the man tugged on his nipple rings, twisting them a little, which caused his eyes to close for a second. She imagined they had to be a big turn on for him and she’d loved to do that for him, to suck on those rings as he thrust that huge cock up inside her. He opened his eyes again and pinned her with their silvery depth. She saw fire in them, lust. He wanted her and it made her heart pound heavily with the revelation. 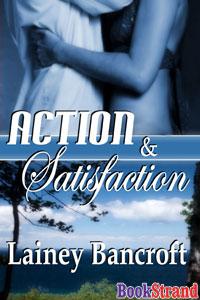 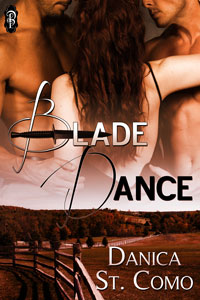 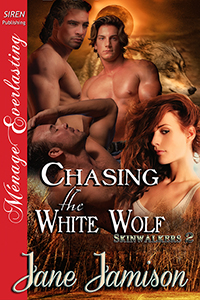