The aging Conte, Luciano, in an autumn glow of romance, takes the stranger, Dakota, as his long-lost lover, whom Luciano had foresaken to take up his traditional role as the head of the family. Dakota quickly begins to act as a catalyst throughout the moldering Italian noble family, already too overly burdened by a quickly disappearing traditional order of society in the vineyard-clad hills of Tuscany.

The Conte's grandson, Paulo, training by family tradition for the priesthood, latches onto the American stranger as his deliverance into another lifestyle altogether, while the Conte's granddaughter, Gabriella, thoroughly disgusted with the paternalistic order she is bound to, seeks any avenue of escape. Rosella the maidand Conte's mistressa woman society designated to serve the noble family, and the local villager portraitist, Giovanni, besmitten with Gabriella but unable to break the barriers of social status to claim her, are both also caught up in the winds of change unleashed by the appearance of the American stranger.

This is the story of five men and women, all thrown toward disintegration and release by the appearance of one young, blonde American stranger, the fiery spark who sets the sun on an ancient Tuscan order. 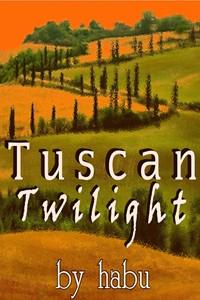 habu is a wizard of enchantment and entices readers into his cave of magic with a few well-chosen phrasecharacterscome to seem as close as our family, friends, and neighbors a don't miss, steaming, character-driven story that deserves reading and rereading. Tuscan Twilight is very special.

I lean my head down from where I am astride Giovanni's hips, pumping up and down and back and forth on him, and he gazes adoringly at me with those wounded fawn eyes of his and opens his lips to receive a kiss, but I swoop lower and attach my teeth to one of his taut nipples.

"Ayieee," he exclaims in surprise and pain. But although he flinches, he doesn't try to withdraw from me.

"Does that hurt, dear Giovanni?" I ask mockingly, as I let loose and turn my eyes up to his. His eyes show his pain, but more than that, they show his love and devotion to me. I wonder what it will take to turn him into yet another Tuscan man pig. Surely if I give any sign of relinquishing control to him, he will become yet another Tuscan man. "If you don't like this, I can leave you now, Giovanni."

"No, no, please, Gabriella. This is heaven. You are like velvet inside, so sweet and tight."

So unlike my grandfather I think. And then, when I think of the American stranger and my grandfather together last night with all of the shackles the old Conte imposes on me, I have a flash of anger and descend on Giovanni's other nipple. I draw blood this time, but he makes no sound. There's just an increase in his heavy breathing beyond the exertion he'd been showing by moving his throbbing cock inside me. He makes me very wet, and that tonguing he gave my lips and clit below was heavenly.

Giovanni has potential. When I tried to emasculate him for letting my grandfather's threats override his burning desire for me despite my seduction here in the pavilion, he flared and became inventive, showing me that I mattered more to him than Tuscan tradition and power. He took his sable-haired brush and a box of melted chocolates and painted my breasts and belly and cunt--and then he followed the chocolate with his tongue and lips. Very enjoyable. He'd given me two orgasms already, when most Tuscan men would not have bothered whether I'd had even one as long as their dicks spouted and were satisfied.

Yes, perhaps a good man, Giovanni. I dip down to him again and feel him tense under me, not knowing where I will attack next. But I have mercy, at least at first, and this time apply my lips to his. We kiss deeply. But slowly I sense him asserting himself, struggling for control. I bite his lip to show him he's gone too far--this tryst is all about me asserting control over my life in a dismal situation. He pulls away and yelps, but when I come to him with my lips again, he willingly opens to me and lets me dictate the kiss, having learned what I will tolerate.

I see concern registered in his eyes, but it's not for anything I am doing to him. He tells me he thinks he hears someone coming down the path toward the pavilion. It might be my grandfather, the Conte.

I don't care, however. Let the old man find us thus. Maybe that's what is needed for him to release me and to let me have a life of my own in Rome.

Giovanni's face takes on a surprised look now, and he's looking intently beyond my shoulder. I feel a hard-muscled naked body saddling up behind me, obviously a man from what I feel pushing up my spine. A hugely endowed man. Arms come around my chest, and hands are cupping my breasts and squeezing hard. I cannot help but cry out.

I turn my head. It's the well-built blond American stranger who fucked my grandfather in his chamber all night long last night, so much so that the old man was unable to appear this morning. The American had gone to the fields with my younger brother, Paulo, this morning and no doubt had just returned from fucking him in the grape arbors as well. I saw the lust in Paulo's eyes for this man. I suppose he now thinks it's my turn.

A hand comes up, and he grabs me by the chin and holds my face turned toward him. His thick, sensuous lips attack mine. He pushes my lips apart and fills my mouth with his tongue. He is very good and very, very desirable. But he is a pig of a man, just like my grandfather and all his Tuscan breed. I bite him on the tongue. He pulls away from me and just laughs and then he kisses me brutally and bites my lip. My flow increases. My body wants this man. But I cannot give in now.

He pushes me down onto Giovanni, crushing my breasts against Giovanni's chest. I wonder what he intends, until I feel his cheek against mine. He's kissing Giovanni on the mouth, and Giovanni is responding to him. Giovanni's hands come, first to cup, the flowing blond hair of the stranger as they kiss, and then behind my back to the American's beating breast. Giovanni's a pig too. I must escape Tuscany altogether.

A Baumgartner Reunion
Selena Kitt
In Shelf
$3.99
Tweets by
sirenbookstrand