Twice in a Lifetime (MM)

Five years ago, British transplant, Jude, left San Francisco after the tragic murder of his lover, Martin. Heartbroken, he settled in Sutter's Bay and opened a small flower shop, hoping that surrounding himself with bright colors and pretty things -- living things -- would somehow lessen the anguish he felt over his loss.

Jude never expects to find a love like he shared with Martin ever again. Certainly a love like theirs won't come along twice in a lifetime. But then Jude meets sexy Rex Warner, the new veterinarian in Sutter's Bay, and he can't help but wonder if his luck has changed.

Will Rex be able to stop Jude from dwelling on the painful past and look toward a promising future instead?

Twice in a Lifetime (MM)

The stranger wore a black cowboy hat of all things, but he was tall, really tall, over six feet Jude guessed, and built of solid muscle. The hair he could see that wasn’t covered by the hat appeared to be the color of chestnuts. Blue jeans framed his backside and he wore a charcoal gray button-down shirt. Jude would bet five dollars he wore cowboy boots. In order to know for sure, though, he’d have to lean back on the stool, which would make his perusal pretty damn obvious.

The man sat at the counter several spots away from Jude. Adam approached him, had a few words, and then brought the man coffee.

Jude picked up his own mug and tried not to drool. Adam walked over to him with the coffeepot, offering him more.

“Bad dreams again?” Adam was one of the few people in the area who knew the truth of what had caused Jude to flee San Francisco. Most people assumed he had a bad break up.

“You look like hell and the drinking is pretty early even for you.”

Jude grimaced. Even for him? Did Adam think he was an alcoholic or something? “As a matter of fact I did have the dream and it was awful, thank you very much.”

“When was the last time you talked to Dr. Carew?” Adam referred to Sutter Bay’s very own psychiatrist. If anything ailed you, residents of the small city would give you the unsolicited advice of speaking to the good quack.

“I spoke to him at the grocery store. Nice polite chap.”

He stared hard right back at Adam. “So am I.” He flicked his head just slightly in the direction of the café’s newest arrival. “Who is that?”

Jude smirked and glanced the cowboy’s way. “Never would have guessed. Is he just passing through Sutter’s Bay?”

Jude tugged his bottom lip with his teeth and eyed Rex Warner with renewed interest. “A vet, huh? Competition for old Gonzalez?”

“Actually, Dr. Gonzalez plans on retiring before the end of the year and Dr. Warner is taking over his practice.”

“Well, aren’t you in the know?” Jude rolled his eyes and took another long swallow of his coffee. “Pardon me for asking and all, but did I just step into Mayberry?”

The other man shrugged. “You asked. Be right back with your breakfast.”

Jude couldn’t seem to look away from the new vet. Any minute now the man would turn around and demand he stop staring. In a way, Jude sort of wished he would because at the moment, Rex Warner didn’t seem remotely interested in glancing in his direction.

It was unnerving, really, the man refusing to look his way. Usually when someone blatantly stared it became so noticeable you couldn’t help but look. Not so Rex.

Jude coughed. Frank Carter glared his way, but Rex didn’t even move. His eyes were locked on the menu Adam had given him earlier.

He sighed and gave up. What did he care if some straight cowboy noticed him anyway? He got up from his stool, went around the counter and grabbed the coffeepot to refill his cup. He resisted adding more Baileys after Adam’s implication a few minutes before. He was about to set the pot back on the warmer when he noticed Rex Warner’s cup.

Shrugging, Jude walked over to the man and poured coffee into his half-empty cup. He waited for Rex to look up. The man had set his menu down and had picked up a newspaper.

At that, Rex did lower the paper and stared at Jude. 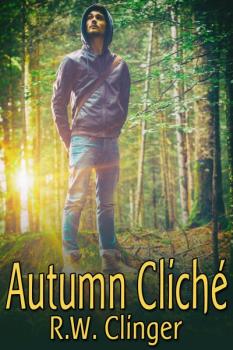